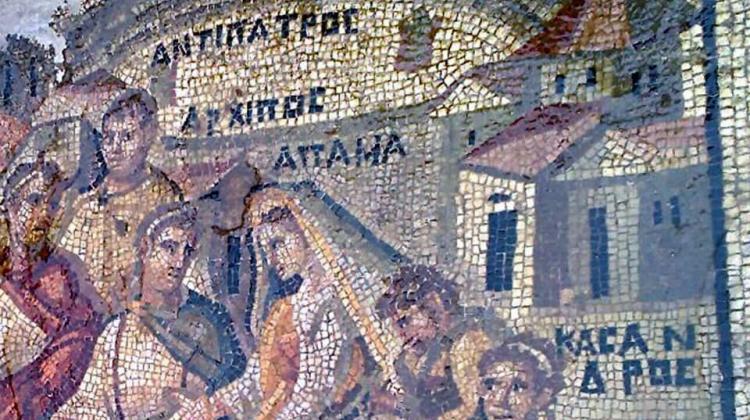 Central fragment of the looted mosaic from Apamea. Photo taken by an unknown author during an illegal dig in Apamea, credit: DGAM archive

One of the largest Hellenistic cities, Apamea, whose ruins are located in modern day Syria, was founded in the autumn of 320 BC, determined Prof. Marek T. Olszewski from the University of Warsaw. Until now, researchers only theorised when it had happened.

The dating was possible thanks to the analysis of the photographs of the floor mosaic, which was discovered and stolen by robbers in 2011. The only known photographs of the mosaic were taken by thieves at the time of the theft. The robbers separated it from the ground and sold to antique collectors through international traders. The Interpol is currently searching for the object.

"Thanks to many months of historical studies and the analysis of the work visible in several photographs, we managed to spot the scene of the foundation of Apamea. Over 30 figures are visible in the photographs of the mosaic, including historical ones such as generals of Alexander the Great, which is unique" - says the research project leader Prof. Marek T. Olszewski from the Institute of Archaeology, University of Warsaw, who made the important observation together with Dr. Houmam Saad.

Initially it was thought that Apamea had been founded by the famous ancient ruler Alexander of Macedon, ca. 330 BC. Recently, scientists favoured the concept that this Macedonian colony was founded in 307-304 BC by Antigonus I Monophthalmus (Antigonus the One-eyed), one of Alexander the Great`s generals. In the light of the latest discovery, that theory also turned out to be incorrect.

"One of the scenes on the mosaic shows the foundation of this city in 320 BC, probably in the autumn, by Antipater (regent of the empire) and his son Cassander, commander of the Macedonian cavalry" - says Prof. Olszewski. In the researcher`s opinion, this is "an extremely important discovery for Hellenistic history in the Middle East", the more so that this issue is often discussed in professional literature.

According to the researchers, the stolen mosaic is about 19 square meters and consists of three stripes with visible figural imagery.

According to the analysis of the scenes visible on the mosaic, the city was initially a Macedonian military colony (320 BC) named Pella. Later, ca. 300 BC, as a result of a "re-fundation act" it received the status of a city, which was named Apamea in honour of the first wife of Hellenistic King Seleucus I Nicator.

The researcher adds that the mosaic also shows queen Apama herself. "This is the first and only portrait of the queen from ancient times known to scholars" - the historian emphasises. She is presented in a sitting pose, in front of a large table with a pile of gold and silver coins to be used to build a part of the new city.

According to Olszewski, the mosaic was partly inspired by paintings of the Hellenistic era or unknown texts from the era. It was probably made in the fourth century

"This mosaic is one of the few history-themed mosaics created in the Greek-Roman antiquity. It is a work of exceptional importance for the reconstruction of the history of Apamea and the Diadochi, commanders of the army of Alexander the Great, who took power after his death" - the researcher believes.

The ruins of the ancient city of Apamea (today Qalaat al-Madiq) are located on the eastern bank of the Orontes River, 55 kilometres northwest of the city of Hama. After Antioch, Apamea was the second largest city of Hellenistic, Roman and Byzantine East.

Apamea was the main military centre of the Seleucids (the dynasty that ruled after the death of Alexander the Great), and after their fall in 63 BC. the city became part of the Roman province of Syria. At that time, together with the neighbouring towns, it had nearly 500,000 residents. In the fourth century AD, Apamea became the capital of the Roman province of Syria Secunda, in the seventh century it was destroyed by the Persians and then rebuilt.

In the 12th century, the city was abandoned after the devastating earthquake in 1152.

In recent decades, archaeologists carried out excavations in this ancient city. In 2011, as a result of the civil war in Syria, the ancient city was destroyed and looted. Until now, researchers have not resumed field research in Apamea.