Zalewska: We are starting to teach the basics of programming in Polish schools 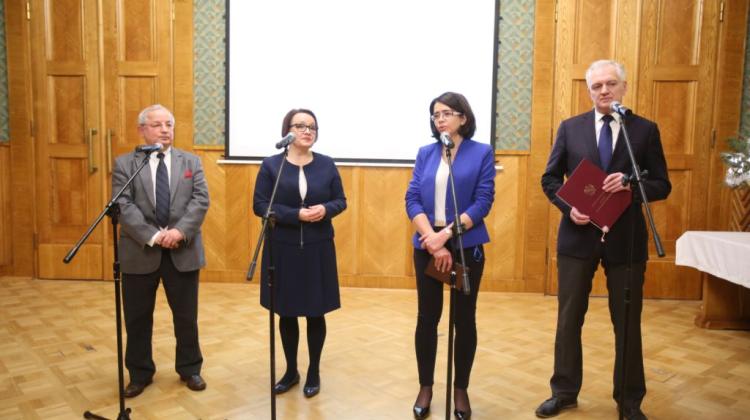 The introduction of programming in computer classes and broadband Internet access in all schools are the assumptions of a joint project of three ministries: of national education, digital affairs, and science and higher education.

Minister of Education Anna Zalewska, Minister of Digital Affairs Anna Streżyńska, Minister of Science Jarosław Gowin and Prof. Maciej Sysło of the Education Computerisation Council - announced on December 22 at a joint press conference that the core curriculum of computer education would be expanded at all levels of education.

One of its elements will be the introduction of learning programming in all levels of schools. In 2016 some of the institutions will carry out a pilot program that will become the basis for the new core curriculum.

The Minister of Education announced that all schools will introduce the program from 2017. The new program will be introduced, following prior preparation, by computer science teachers.

"Our children can not afford to waste time on a slow, arduous task of building digital skills based on solutions outside school. Only school education can offer systematic teaching of digital skills" - stressed Zalewska.

Anna Streżyńska added that "our children also can not afford to be behind their peers in other countries". "Today we have an opportunity to take their first steps on this path" - she noted. "We join in this respect other European countries, where programming is part of teaching computer science in schools" - she declared.

Prof. Maciej Sysło of the Education Computerisation Council at the Minister of Education noted that the joint proposal of the ministries is an attempt to fill the computer science classes that are already taking place in schools with modern education that includes programming.

Network access is designed to provide all schools with a "technology platform for all new technologies". Funds for the project will come from the program Digital Poland.

Deputy Prime Minister Jarosław Gowin emphasised that achieving these two objectives will introduce Poland to the forefront when it comes to the educational process. "The introduction of programming schools from the first grade of primary school will be the second such program in the world. There is also no other country in which all schools have access to broadband Internet" - said Gowin.

The minister also recalled the names of the representatives of the Lvov school of mathematics: Stefan Banach, Stanisław Mazur, Stanisław Ulam, and Hugo Steinhaus. He expressed the hope that "thanks to the program, among young Poles will be outstanding followers of the accomplishments of Polish mathematical thought of the Second Republic".