Remains of the oldest known land plants found near Kielce 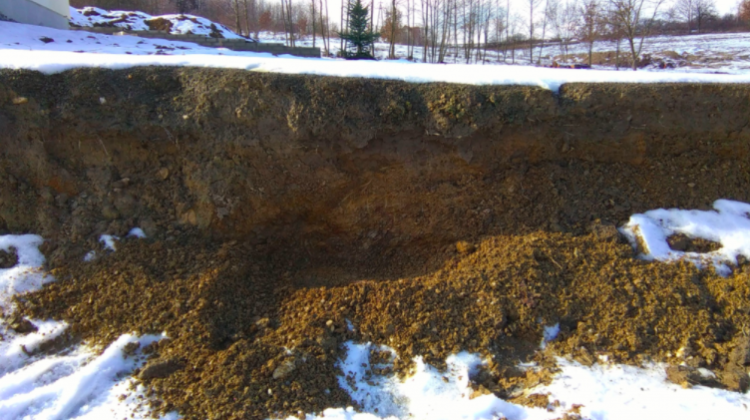 Remains of the oldest known plants that conquered the land have been found in the southern part of the Świętokrzyskie Mountains. The find is approx. 440-450 million years old and constitutes a palaeontological proof that terrestrial plants evolved from bryophyte-like forms.

Fossilized plant remains were found in Zbrza (Kielce District) in the southern part of the Świętokrzyskie Mountains. They are fragments of very old, primitive, non-vascular plants that did not have specialized, for example conductive, tissues (currently bryophytes belong to this group).

Researchers found traces of the oldest plants by accident, when Dr. Mariusz Salamon from the Faculty of Earth Sciences of the University of Silesia was looking for invertebrates - crinoids. "We accidentally found a dig made for a house foundations. We took few tens of kilograms of rock samples that we brought to the Faculty of Earth Sciences laboratory. After washing and drying the samples we found the organisms I was interested in. But we also noticed strange, charred remains that caught the attention of a group of specialists" - says Prof. Salamon.

Visual inspection and verification of results by a group of palaeobotany experts from France and Belgium confirmed that the sample was about 445 million years old and probably contained remains of higher plants.

"The sample contained spores that had been certainly produced by land plants. In the meantime, more fragments of rocks were being brought and inspected, more than a few hundred kilograms in total. The whole procedure took over a year, a large group of people was involved in the search for parts of the plants" - the scientist says.

Ancient plants measured a few millimetres and could resemble a split twig. "This dichotomous division is very important - it proves that at this stage of evolution the plants no longer had only one branch ending with a sporangium that ended the growth of the sprout. For greater effectiveness, the branch was split in two. This way a single sprout could have two sporangia" - says one of the discoverers.

Researchers also found a trace of the structure they interpret as a stomata apparatus. Its presence indicates that the plant had to function in a terrestrial environment.

The age of the find from the Świętokrzyskie Mountains is estimated at about 445 million years. It is about 15 million years older than the oldest previously known fossils of terrestrial plants.

Scientists recall that life is thought to have originated in the seas and oceans, and the first primitive plants probably appeared on land around 480-460 million years ago in the early or mid Ordovician. The new find represents an extremely old type of organism.

The later plants with vascular tissues were more complicated - the oldest know plants of this type is Cooksonia, which measured about 5-6 cm. Its oldest remains date back around 430 million years. The plant occurs quite often on various continents in younger sediments (from the Silurian). This means that it was already widespread in the world.

Finding the probable remains of primitive plants in the Świętokrzyskie Mountains allows to fill the gap in the collections of fossils that illustrate the theory of evolution. "Since we have a 5-cm Cooksonia in the Silurian - one can expect that it did not appear out of nowhere, and previous evolutionary processes led to its occurrence. There is a concept that in the evolution of plants on Earth, vascular plants were preceded by a bryophyte phase: various types of plants similar to today`s horworts and liverworts" - says the scientist.

The remains from the Świętokrzyskie Mountains represent this group.

Finding them required skill and a bit of luck, because plants without hard and rigid structures (wood or phloem), even if they are fossilized, become fragile and easily disintegrate after millions of years. "Spores are much better preserved because the cell is surrounded by substances that are very resistant to chemical processes" - says Dr. Paweł Filipiak from the University of Silesia.

The task was the more difficult that the remains were very small - the largest fragment was only a few millimetres long. "When we look at a piece of rock, all we see is a black spot" - the scientists say.

Professor Salamon adds that these sediments have been studied for years, but only now researchers found such old plant remains. A similar find in the Ordovician rock layers was also recorded in the 1990s in Kazakhstan.

In the period, from which the remains originate, today`s Świętokrzyskie Mountains were the bottom of a shallow sea. The fragments were found probably not far from the place where the shore had been. A storm or wind carried fragments of plants to the sea and pushed them into the depths of the water - like on the beach in Ustka, where storm waves rush into the dunes and wash away the remains of plants. These remains later drift, rot and sink to the bottom. "The situation could be very similar 445 million years ago" - says one of the authors.