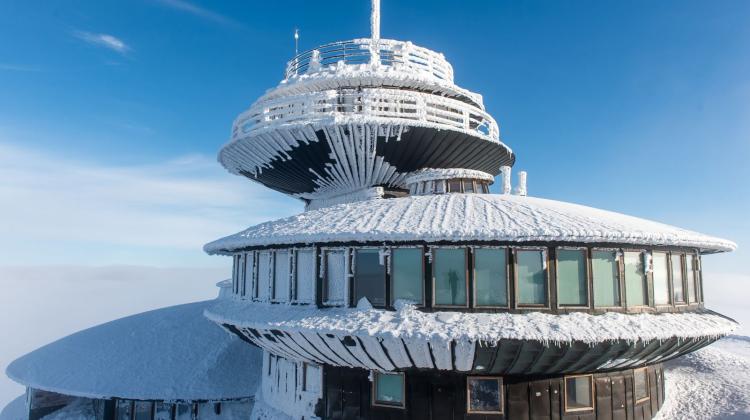 Śnieżka Meteorological Observatory of the Institute of Meteorology and Water Management. Meteorological observations on Śnieżka, the highest peak in the Karkonosze Mountains, have been conducted for nearly 140 years. Photo: Fot. PAP/Maciej Kulczyński 08.02.2018

Meteorological measurements on Śnieżka (1602 m above sea level), the highest peak of the Karkonosze Mountains, have been conducted without interruption for nearly 140 years. Today, eight people work at the High Mountain Meteorological Observatory of the Institute of Meteorology and Water Management, and the measurements carried out on Śnieżka are part of the global meteorological observation system.

High Mountain Meteorological Observatory of the Institute of Meteorology and Water Management on Śnieżka is one of two such facilities in Poland. The second observatory is located in the Tatra Mountains, on Kasprowy Wierch. The construction of the characteristic observatory building, consisting of three connected discs, was completed in 1974.

Measurements conducted on Śnieżka include temperature, air humidity, cloud base and pressure. Researchers also conduct observations of such meteorological phenomena as rainfall, fog, hard rime and black ice. Meteorologists assess the intensity of these phenomena.

"Measurement data are uploaded into the system in real time, and every hour a meteorologist prepares a message, in which measurement data and information about the phenomena are encrypted and sent to the global meteorological observation system" - says the head of the observatory Piotr Krzaczkowski.

24 such messages are generated in 24 hours. They are prepared more often when extreme weather phenomena are observed on the highest peak of the Karkonosze Mountains. This includes storms and gales. "There are a lot of these phenomena in a year; windless, sunny weather is very rare on Śnieżka in winter. +Silence+, almost complete lack of wind, happens here in one percent of days of a year" - says Krzaczkowski.

The strongest winds on Śnieżka normally reach 160-180 km per hour. However, there are also winds blowing at speeds that exceed 200 km per hour. "With a wind that strong, observers can not go outside because it is too dangerous. Extreme weather phenomena that also often occur here include storms with numerous discharges. Lightnings strike the top of the observatory building during storms" - says the meteorologist.

Krzaczkowski points out that milder winters have been observed on Śnieżka in the last ten years. The last severe winter came in 2008/2009 and caused a construction disaster in the observatory building. The upper disk of the observatory suffered serious damage.

Eight people work in the observatory. They have from one to several decades of experience in this facility. Many of them are meteorologists, for whom it is their first job, and they remain until they retire. "This place attracts people, but a person who does not like the mountains will not last long" - says Krzaczkowski.

Meteorologists work in shifts. At least two of them are on duty in the observatory at all times. Employees come to Śnieżka for ten days. After this time they come down. In winter, they almost always climb to the top on foot. They have to carry food for their stay in the observatory. The hike from Karpacz takes one and a half to two hours.

"Those people also spend their free time hiking in the mountains. One of the employees is a mountain rescuer" - says the head of the observatory, who has been working in the facility for 25 years.

Full automation of measurements in meteorological observatories was considered a few years ago. "This has not been achieved yet, because there are observations that a machine cannot handle. It also turns out that machines are not always reliable in the extreme conditions on Śnieżka" - says Krzaczkowski.

Measurement data, in addition to being entered into the internal network, are also recorded manually in the meteorological logs - just like 100 years ago. The observatory has such logs written in German, from the 1930s. Poland took over this facility from Germany in 1945. During the first post-war years, Polish and German meteorologists worked together (until 1948). The first meteorological measurements on the highest peak in the Karkonosze Mountains were carried out in 1880. (PAP)