Record-capacity quantum memory built at the University of Warsaw 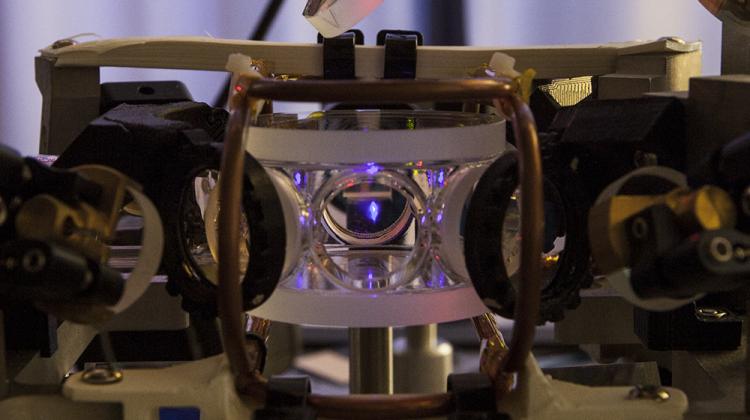 Source: Faculty of Physics of the University of Warsaw

The results of the experiment have been published in the prestigious scientific journal Nature Communications.

According to the release, memory is an indispensable element in any information processing process. Just like you cannot build a classic computer without RAM, it is not possible to build a quantum computer without the so-called quantum memory. It is a device capable of storing a superposition of quantum states that can be reproduced on the memory user\'s command. The key parameter of such a memory is its capacity, meaning the number of qubits (quantum bits) that memory can effectively process.

Simultaneous operation on many qubits is the key to efficient parallel quantum computing that offers new opportunities in the fields of imaging or communication. Particularly high amount of such information can be encoded with many photons with precisely controlled properties.

"Regardless of the efforts, the production of multiple photons on demand is an experimental challenge for all groups dealing with quantum information processing. Currently popular combining multiple single photon emitters into one network ("multiplexing" popular in telecommunications) has the disadvantage that with the increase in number the needed photons, technical complexity rapidly increases" - the release reads.

Researchers explain that the use of quantum memory in the generation process causes a dramatic reduction in the waiting time for the production of ten to twenty photons (a number sufficient to make elementary quantum calculations) from several years to seconds. Currently, there are many ways of storing, as well as coding information about emitted photons. A promising idea is to use information on the emission angles of photons, which in combination with a camera sensitive to single photons allows direct registration of the light emitted from the memory.

The quantum memory constructed at the Faculty of Physics of the University of Warsaw can store several hundred states of light simultaneously - which is a world record. Solutions from other research groups now allow for the simultaneous storage of photons in up to several dozen states.

"The heart of the system built at the University of Warsaw is the so-called magneto-optical trap (MOT): a group of rubidium atoms in a glass vacuum chamber is trapped and cooled to 20 microkelvins with lasers and a magnetic field. The memory protocol is based on non-resonance light scattering on atoms: in the recording process, we illuminate a cold cloud of atoms with a laser, which results in photons being emitted at random angles, then recorded by a sensitive camera" - explain experts from the Faculty of Physics of the University of Warsaw.

According to physicists from the University of Warsaw, information on the directions of dispersion is stored inside the set of atoms in the form of collective excitations (so-called spin waves) that can be reconstructed on demand in the form of another group of photons. Measurement of the correlation between the direction of photons emitted during the recording and reading from the memory allows to conclude that the experiment produces light, the properties of which can not be described using classical optics.

The prototype quantum memory from the Faculty of Physics of the University of Warsaw occupies two large optical tables and functions thanks to nine lasers and three computers that control its operation.

Researchers emphasized that the quantum memory created at the Warsaw university is unique in one more respect. Information about all photons emitted from memory is stored in the same volume of atoms that share the saved information. This allowed to observe the interference of two spin waves originating from the atoms in the external magnetic field, described by a different set of quantum numbers.

"In the future, this will allow further, more complicated manipulation of the state of atoms, and ultimately the production of individual photons with parameters controlled by the experimenters" - explained the head of the Quantum Memory Laboratory, Dr. Wojciech Wasilewski.