Lem Star in the Sky with Planet 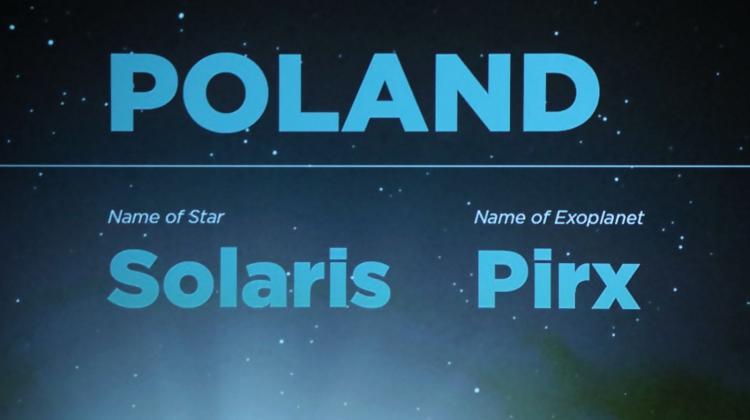 Celebration of the announcement by the International Astronomical Union of the planet names selected in national competitions, Dec. 17 in Warsaw. IAU100 NameExoWorlds is a global event to celebrate the 100th anniversary of the International Astronomical Union (IAU). Each country has been given the right to name one planet. Credit: PAP/Tomasz Gzell 17.12.2019

A planet discovered by Polish astronomers and its star are to be named after a story character and novel by sci-fi author Stanisław Lem.

The planet in a system called BD+14 4559 was named Pirx after the character from a collection of Lem stories called Tales of Pirx the Pilot, while the star will be called Solaris after the author’s 1961 book of the same name about a planet covered by a huge ocean.

The decision was announced last Tuesday by the International Astronomical Union following their IAU100 NameExoWorlds competition in which different countries were assigned one planetary system each, and for which each country ran its own competition.

Poland had been assigned the BD+14 4559 system after it was discovered by a team of Polish astronomers (Prof. Andrzej Niedzielski, Dr. Grzegorz Nowak, Dr. Monika Adamów, and Prof. Aleksander Wolszczan) working on the Toruń-Pennsylvania extrasolar planet search programme.

The winning Solaris/Pirx combination went to Eryk Nowik from the town of Siemiatycze in Northeast Poland.

According to the competition procedures, the final decision on the name was taken by the International Astronomical Union which decided not to accept the names Geralt/Ciri (characters from the Witcher saga by Andrzej Sapkowski), despite them winning the online vote (over 53%, over 47,000 votes). The names Solaris/Pirx received less 16 percent Internet users` votes (nearly 14 thousand votes).

The head of the national competition committee Dr. Krzysztof Czart told journalists that the IAU rejected the choice of Internet users because Geralt and Ciri are trademarks.

The 88,000 votes from Poland were the highest out of all the countries tasking part. The top 3 also included Spain with approx. 40,000 votes and China with approx. 30,000 votes. The votes were collected in September and October via the website www.iau100.pl/planety.

Professor Andrzej Niedzielski said during the meeting in Warsaw that most of the stars visible in the sky did not have easy to remember names. Therefore, the International Astronomical Union`s initiative to change this situation should be considered positive. He added that to his knowledge, Solaris was the first star whose name was associated with Poland. When asked by journalists what he thought of the name given to the planet he had discovered and its star, he said: "That`s the proposal I voted for. Lem is one of my favourite science-fiction authors, so I`m very happy."

The star from the system BD+14 4559 is visible in the sky in the constellation Pegasus. It can currently be seen from Poland in the evenings with amateur telescopes and binoculars. In turn, the planet is similar to Jupiter in terms of mass and size.