Batteries of the future: How to release energy from excited nuclei? 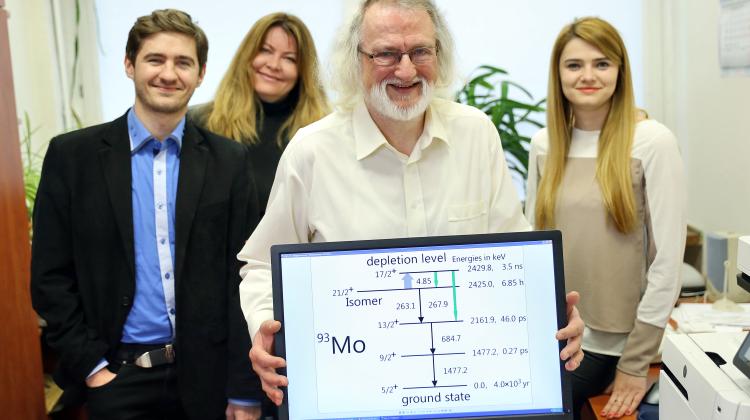 Interdisciplinary research into the observation of a new physical phenomenon - the process of nuclear excitation by electron capture (NEEC) - is being conducted, among others, by researchers from Toruń. If this research succeeds, it will be a step towards building super-efficient batteries.

If the NEEC (Nuclear Excitation by Electron Capture) phenomenon is observed - it will mean that a controlled release of huge amounts of energy stored in excited nuclei is possible. And that, in turn, would allow to create new, ultra-efficient batteries in the near future.

Such unconventional batteries could produce millions of times more energy per battery mass unit than traditional batteries. On top of that, they could work for decades. Such energy sources would be particularly useful for powering space crafts and vehicles moving on the ocean floor or in volcanic craters.

Research into the NEEC phenomenon is being conducted by the team of Prof. Marek Polasik of the Faculty of Chemistry, Nicolaus Copernicus University in Toruń (the team members are Dr. Katarzyna Słabkowska, Dr. Ewa Węder and Dr. Łukasz Syrocki) in collaboration with scientists from U.S. Army Research Laboratory.

Professor Polasik, whose team has been involved in designing the experiment, explained that accelerated molybdenum 93Mo ions (atoms with a large number of electrons removed) are used to bombard a shield made of selected material, such as carbon. When molybdenum ions pass through such a shield, it catches electrons, whose kinetic energy is so large that it allows to excite the nucleus.

In an article in Physical Review C (https://journals.aps.org/prc/abstract/10.1103/PhysRevC.95.034312), researchers presented details of a pioneering experiment that would for the first time allow to observe a NEEC process for the 93Mo molybdenum isotope in an isomeric state, in which it remains for about 6.85 hours and collects enormous amounts of energy. Providing a single nucleus of this isomer with about 4.5 keV of energy causes its transition to a short-lived state in which it is immediately degraded, releasing 500 times more energy, i.e. of the order of 2.5 MeV.

"Mastering the controlled use of this phenomenon and developing new, unconventional nuclear batteries will be a very valuable human achievement!" - commented the researchers from the Nicolaus Copernicus University in Toruń.

The exceptional importance of these studies is evidenced by the fact that teams from all over the world have been competing for more than 40 years to be the first to observe this new phenomenon (the NEEC process) for any isomeric nuclear state.

"Many have already tried, but no one has yet shown that the excitation of an atomic nucleus as a result of the capture of electrons to its atomic shells is possible" - explained Prof. Polasik. He added that trick is to select the speed of 93Mo isomer ions so that the electrons provide them with a perfectly matched amount of energy needed to excite the nucleus.

Researchers from the Nicolaus Copernicus University in Toruń are convinced that the NEEC observation is now a real possibility because of their collaboration with outstanding specialists from the US Army Research Laboratory - especially because they have access to the most powerful and unique Gammasphere spectrometer installed at the Argonne National Laboratory (ANL) line accelerator in the US. This device offers the unique opportunity to unequivocally identify NEECs for the 93Mo isomer and nuclear isomers of many other elements.