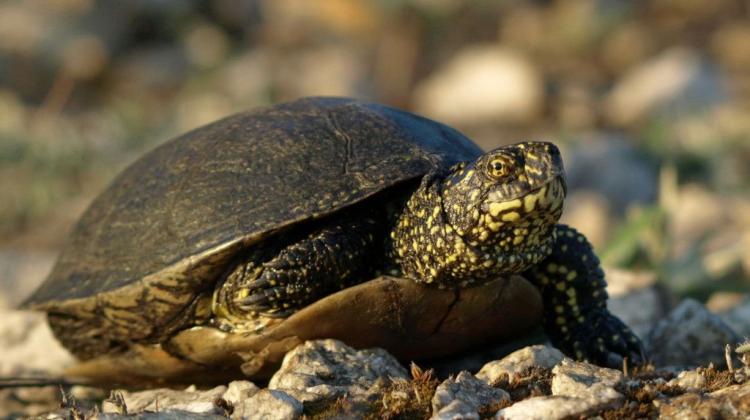 By mid- March, five ponds will be built in Forest District Nidzica to improve the living conditions of European pond turtle. The project is worth more than PLN 1.5 million.

Regional coordinator of the turtle protection project Jarosław Banach told PAP that water reservoirs, which would be built in Napiwodzko-Ramucka Forest, should contribute to the development of the local population of these animals. They will be located in places where a dozen years ago natural ponds and wetlands were. Banach added that the work should be completed by mid-March, before the season of activity of turtles.

Construction of small retention reservoirs is aimed to stop drainage of land, through which the migration routes of turtles lead. 10 ponds and one causeway have already been built in Warmia and Mazury, and another five reservoirs and two artificial rapids west of Mikołajki are planned for late 2014. Hydrological monitoring is also conducted to determine the water quality and cause of drying reservoirs which are the habitat of turtles.

The project included cutting bushes near the turtle refuges. Females of this species lay their eggs on the southern, sunny and sandy slopes of hills. Many of these places have overgrown or been wooded in recent years, which threatened nesting sites.

"While cutting bushes, we stumbled upon an illegal cannabis plantation and had to call the police. But the presence of this plant indicates that the place is warm enough for the turtles to lay eggs" - said Banach.

European pond turtle protection project in the Warmia and Mazury province has been implemented for two years by the Polish Society for the Protection of Birds. Its purpose is to improve the feeding, breeding and wintering conditions of turtles. Activities mainly concern refuges in Napiwodzko-Ramucka and Pisz Forest.

The project to protect these reptiles in the Nature 2000 sites in the Warmia and Mazury province received more than PLN 1.5 million from the European Regional Development Fund and the National Fund for Environmental Protection and Water Management. German NGO Vogelschutz-Komitee has transferred nearly 100 thousand zlotys.

According to naturalists, the population of European pond turtles began to decline in the first half of the twentieth century. Contributing factors included lower levels of groundwater and surface water, afforestation of wasteland, expansion of roads, intensive agricultural activity and excessive development of tourism.

Currently, the population of turtles in Warmia and Mazury is estimated at approximately 350 adult animals, representing 30 percent of national population of these animals. Their numbers are highest in the reserve Nadrowskie Bagno near Olsztynek, Jezioro Orłowo Małe near Nidzica and between Mrągowo and Mikołajki.

European pond turtle (Emys orbicularis) is the only representative of this group of reptiles living in Poland, under species protection since 1935. It is among the animals at the extreme risk of extinction, included in the Polish Red Book. (PAP)