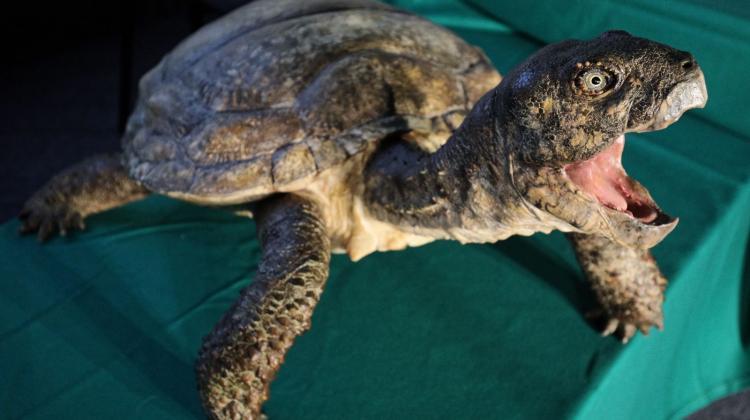 Some of the oldest turtles in the world, living 215 million years ago in today's province Silesia, measured about one meter; they were probably omnivorous and amphibious. Researchers from the Institute of Paleobiology PAS presented the latest conclusions from the analysis of fossils.

In 2012, scientists reported the discovery of numerous remains of some of the world's oldest turtles that lived about 215 million years ago. This was a previously unknown species, named Proterochersis porebensis, which roughly translates into 'early turtle from Poręba' (its remains were discovered in Poręba near Zawiercie). In recent years, scientists analysed the fossils of these animals.

A reconstruction of this a turtle is now on display at the Museum of Evolution of the Polish Academy of Sciences in Warsaw. During the meeting with journalists, scientists also informed about the conclusions from the fossil analysis.

One of the discoverers of the new species Dr. Tomasz Sulej from the Institute of Paleobiology PAS says that the shell of an adult turtle from Poręba could have been about 70 cm long, and the whole turtle probably measured about a meter in length. Thanks to the analysis of coprolytes (petrified faeces), scientists also learned about the diet of turtles, which included fish and plants. This suggests that the turtles were omnivores and spent time both in water and on land.

'Thanks to recent work we have discovered a completely unique thing', emphasises Dr. Sulej. 'The shells of the turtles we study are so well preserved and so old that they revealed a secret that had puzzled palaeontologists: how turtle shells originally formed'.

According to the researcher, the shell of the turtle from Poręba consisted of three parts: ribs, vertebrae and small bone shields, the mosaic of which could be seen in the front and back of the preserved specimen.

At first glance, ancient turtles from Poręba were similar to today's ones, emphasises Dr. Tomasz Szczygielski from the Institute of Paleobiology PAS, who analyses their structure. However, they had primitive features not found in today's turtles. Therefore, for scientists these fossils carry important information about the evolution of these animals.

'The most significant difference is one we do not see from the outside: the arrangement of bones in the shell', explains Dr. Szczygielski. The scientist says that there were many more skin bones in the fossils than in later turtles. The arrangement of the bones was irregular and there were a lot of them, especially at the front and back of the shell. ;This is a big surprise', adds Dr. Szczygielski.

Reducing the number of bones during evolution was beneficial to turtles. 'This increased shell strength and its resistance to predator attacks', he emphasises.

Unfortunately, the outer scutes of the shell (structurally similar to nails) have not been preserved, but it is possible to reconstruct their arrangement and size on the basis of bone structure.