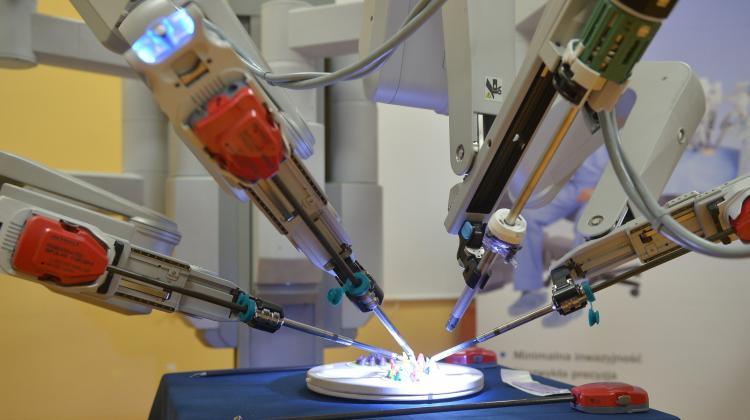 More and more surgeries are carried out with the help of robots. Dr. Katarzyna Kolasa, an expert in the field of health economics and artificial intelligence in medical care at the Kozminski University talks about whether we need them and how to put them to best use.

Science in Poland: Last year, almost 900 procedures were performed in Poland with the participation of the Da Vinci surgical robot. How does it compare to the US or Western Europe? Do we have enough such robots and are they being put to good use?

Dr. Katarzyna Kolasa: Currently there are over 5.5 thousand Da Vinci robots worldwide, most of them in the US. In Europe, we have less than 1000, and the lion`s share of these devices support the German and Italian health sector. Approximately 1 million 229 thousand procedures worldwide were performed using Da Vinci robots in 2019. And this is a dynamically developing market, new players continue to emerge, for example J&J, Medtronic, Stryker Corp., Zimmer Biomet Holdings Inc. Thus, the number of medical robots in Europe, approx. 900 units, is still not enough, especially if we compare ourselves to the countries leading in this field.

SiP: Do patients benefit from the use of robots?

K.K.: It is difficult to argue with such benefits as, for example, fewer complications after surgery, shorter hospital stay and less visible wounds. These benefits are obvious. At the same time, for many therapeutic indications there is still no reliable scientific evidence for better treatment effectiveness of removing the effects of the disease using such robots compared to traditional methods of treatment. We need randomised trials similar to those carried out when assessing the effectiveness of pharmaceuticals. The problem is that it is very difficult to carry out the relevant research in this case. It is therefore crucial to ensure homogeneity of the compared groups of patients and the selection of such treatments that will be carried out by appropriately experienced doctors. It is estimated that a surgeon must carry out at least 30 procedures using a robot to be considered an experienced person in conducting such medical procedures. We certainly need more randomised studies, such as ANCOR, for which recruitment is underway.

SiP: Considering the already available data, can it be said that more such devices could be used in Poland?

KK: For me it is obvious - there should definitely be more of them. However, they must be skilfully introduced into clinical practice.

SiP: What does that mean?

KK: We have to rely on studies confirming the effectiveness of these robots, and these are still missing. It is also necessary to create a system assessing their usefulness and properly prepare for savings resulting from the use of robots. The introduction of such a device is a huge investment: not only the purchase of a robot is necessary, but also adaptation of the facility and personnel training. According to German estimates, the cost of surgery is on average 2.5 euros for the German payer. Savings are often difficult to quantify, for example when we talk about improving work ergonomics or ultimately less time-consuming work of advanced medical personnel. It is therefore important not only to compare robot-based procedures with existing clinical practice. It is also necessary to develop new standards for the work of medical staff and patient care. Also significant are the savings associated with patients` faster return to work, less burden on the family caring for the sick person and, finally, shorter hospital stay.

SiP: Could you elaborate?

KK: For example, if the hospital stay is getting shorter, you have to decide what to do with saved time and other resources: whether to perform other procedures, if so, which ones, etc. In my opinion, system solutions are needed to help hospitals introduce surgical robots. I see an important role of the state that should oversee such investments.

SiP: What else could the state do?

KK: Firstly, introduce clear standards for assessing the demand and cost-effectiveness of robotic medical procedures. Secondly, develop guidelines for data collection registers. The goal is to gain credible knowledge about effectiveness and safety. A few years ago, analyses of FDA (Food and Drug Administration) records from 2000-2013 revealed that as many as 144 fatalities were recorded among the undesirable effects of using surgical robots. Naturally, this caused a controversy. In addition, analysis of postoperative data in over 300 cancer patients assigned in part to standard uterine surgery, and in the second part to minimally invasive surgery with the use of a robot, showed that survival after 4.5 years was better by over 10 percentage points in the first group. However, results of analyses of the register of procedures using robots in Denmark lead to completely different conclusions. Analysis of more than 5,654 uterine removal procedures showed that the risk of serious complications in the case of robotic procedures was halved compared to traditional surgery. Therefore, new standards are crucial, as well as data and data again.

SiP: Progress will probably be getting faster, so such measured will be increasingly needed. In what direction do you think surgical robotics will be heading?

KK: We are on the verge of a 5G revolution. In China, remote operations are already being carried out with the help of this technology. In the absence of adequate staff on site, such procedures can save lives. Another element are decision algorithms that will definitely be able to perform the surgery more accurately than a human. They are already sometimes better at diagnostics, for example the analysis of imaging tests. In addition, robotics in surgery enters new levels of innovation through the support of Augmented Reality. Thanks to AR, the surgeon performing the procedure receives photos enabling efficient monitoring of the area around the operated site. The surgeon also gets realistic but still virtual images of the procedure being performed. AR will find applications not only in the training of doctors, but in the future also in the treatment of patients.

SiP: Are we ready to trust robots with our health?

KK: It will require a change of mentality. We have to consider whether we are ready as patients and whether doctors are ready to be assisted by robots. It`s a matter of trusting the machine. A reminder: we need more research on the effectiveness of medical robots. It should also be expected that patients themselves may often be interested in such procedures, considering their precision, but also having knowledge about the lower risk of scars and postoperative pain, as is the case with breast mastectomy, for example.

SiP: Meanwhile, Poland can be not only a consumer of such devices, but also a manufacturer. For example, the Foundation of Cardiac Surgery Development in Zabrze develops Robin Heart, a robot designed for heart surgery. Does our country have a good chance of selling such devices?

KK: Why not? Thanks to this, we also have great opportunities to promote Poland. However, the competition is huge. State support is needed, for example in the form of grants. At the same time, again, we need scientific evidence to prove the benefits of using a robot, because without it we will not be credible. What`s more, we need to create a whole new path of treatment. After all, the robot is only part of a longer therapeutic process that lasts from the onset of the disease to its cure.