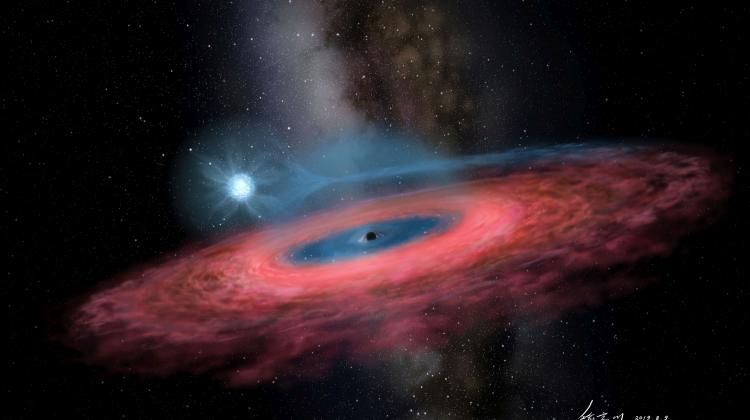 A massive black hole with a mass 70 times greater than the sun has left astronomers head-scratching over how it came into existence.

The black hole, named LB-1 by the astronomers, is located around 15,000 light-years from Earth.

Until now scientists were only aware of black holes with masses below 50 times that of the sun.

A black hole is such a massive object that because of gravity, nothing - not even light - can escape it. Although there are millions of black holes in our galaxy, only about 20 have been observed so far.

The latest discovery has also bamboozled the scientists, however, as it appears in the spiral arm of our Galaxy.

Astronomer Krzysztof Belczyński, an astrophysicist from the Nicolaus Copernicus Astronomical Center of the Polish Academy of Sciences who is part of the team that discovered the new black hole, said he had previously made a bet with other researchers that black holes with a mass of 55-130 times that of the sun cannot be found during the first hundred observations using LIGO-Virgo gravitational wave detectors.

He said: “I will probably lose three bottles of wine in this bet. But for the sake of science, it`s worth it! Now I will have a challenge: I have to find the way in which, say, black holes weighing 70 solar masses are created.

Until now, it was believed that stars so gigantic that black holes could be formed out of them would be torn apart by supernova explosions caused by so-called instability of parish.

”And this would mean that after such objects matter is scattered around, not a black hole" - says prof. Belczyński.

THERE IS NO SUCH HOLE IN THE WORLD?

Black holes appear when an object - such as a star - reaches such a high mass and density that under the influence of gravity it "collapses", and in this way a singularity is created in space-time, in which the laws of physics are broken.

The black hole described in the academic journal "Nature" is the largest so-called star black hole in the Milky Way. In our "area", only the supermassive black hole in the centre of the Galaxy is larger. However, it is an object from a different category - it has a mass of one million masses of Suns.

The discovery was made by a team of scientists led by prof. Jifenga Liu from the National Astronomical Observatories of the Chinese Academy of Sciences. Astronomers scanned the sky for stars that move in an unexpected way using the large LAMOST telescope (4 m in diameter). More precisely - they were looking for stars orbiting something that cannot be seen. Such a star was found, and observations of its movement were confirmed by the world`s largest telescopes - in Hawaii and Gran Canaria (they are 10.4 and 10 m in diameter).

Despite the questions, the scientists are nonetheless excited and hope their discovery will help revise theories about how black holes are created.

In addition to scientists from China, the team includes researchers from the United States, Spain, Australia, Italy, the Netherlands and Poland.

Their findings were published in scientific journal Nature in an article entitled “A wide star–black-hole binary system from radial-velocity measurements”.