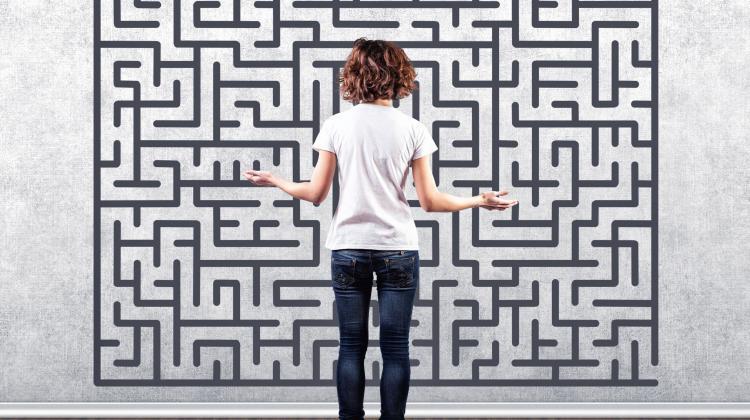 People who consider themselves overweight, regardless of whether they actually are, exhibit less perseverance, a study conducted by Polish scientists shows.

According to the researchers, the lack of perseverance in people with a negative body image may be the result of internalisation (recognition of values, norms, views, etc., initially imposed from the outside, as one`s own) of harmful stereotypes. People who are overweight or obese are often perceived as unattractive, lazy and inconsistent. When they start thinking that about themselves, their self-esteem decreases and psychological problems start.

Wojciech Styk from the John Paul II Catholic University of Lublin, together with colleagues from the Medical University of Lublin and the Cardinal Stefan Wyszyński University in Warsaw, checked how body image and real body mass index (BMI) are associated with perseverance in pursuit of personal goals and the ability to control distracting thoughts and memories.

"The idea for the study was born from my personal experience (I was overweight in my youth) and the experiences of people who had lost weight, and yet their body assessment remained negative. One of the patients said after an effective diet and achieving a healthy weight that despite this success, if someone called: "Hey, fatty" on the street, she would be the first to turn her head... I was looking for confirmation of this phenomenon and for its source" - says Styk.

The study involved 135 volunteers who shared information on body size and their feelings about it via a website. The respondents indicated whether they thought they weighed too much, too little, or had just the right weight. Then they solved simple mazes. Their task was to solve as many as possible, without a time limit and any external motivation.

It turned out that the participants with normal body weight were more persistent (they solved more labyrinths) than people who were overweight or obese. They were also more resistant to distractions, meaning that on average they needed less time to solve one maze.

In previous studies, lack of perseverance in overweight and obese people was associated with difficulties in suppressing insignificant thoughts or memories, for example about food or appearance, and it was suggested that they could lead to overeating and maintaining excessive weight. This study also showed a correlation between BMI and the ability to control secondary thoughts, but it was weak.

Interestingly, respondents who simply perceived themselves as weighing too much also exhibited less perseverance. This applied especially to people who actually had an elevated BMI, but also to participants with a normal body weight.

"Nearly a third of respondents, despite having a healthy body weight, assessed that they weighed too much and achieved worse results in the analysed perseverance indicators than respondents who rated their weight as normal" - the authors write.

"Our research continues; we want to examine the mechanism of action of specific mental images, so-called mental simulations, which are used as one of the methods to strengthen the perseverance of people trying to lose weight. I hope that the results of this research will help people who struggle with overweight and obesity. The study is conducted in a similar form as the previous one (via the Internet) and locally with a group of people participating in a weight loss program run by a dietician and psychologist supporting the participants" - adds Styk.