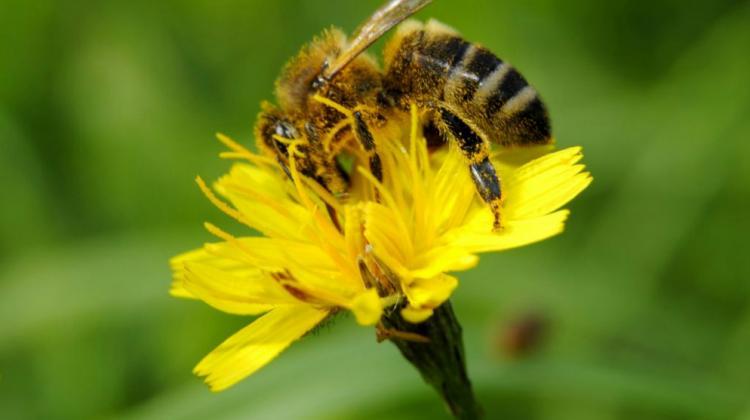 Wind farms do not harm bees, says beekeeper Dr. Dariusz Karwan. This is the conclusion of his two-year research on 20 apiary families. So far, it has been thought that wind turbines negatively affect these insects.

Dr. Dariusz Karwan conducted his research as part of his doctoral project at the West Pomeranian University of Technology in Szczecin.

"I have not recorded any negative effects of presence near wind turbines on bees; this applies to bee health, behaviour, as well as honey, wax and propolis yields" - says beekeeper, Dr. Dariusz Karwan. He notes that during his research, ten families of the honey bee (Apis mellifera carnica, the Alfa line) were placed near wind turbines, and another ten families 11 km away from wind turbines.

Wind speed was much higher around the wind farm, it was also much louder there; as the researcher explains, the sound of wind turbines is very similar to the sound of a jet plane taking off. "In addition to audible sounds, wind turbines also emit ultra and infrasound, very destructive to mammals and birds" - he says.

The researcher does not attribute this to the direct effect of wind farms on bees. "It is difficult to choose two identical locations for an apiary, because the area of honey plants is different in particular years, and these differences could have come into play here" - the beekeeper explains. He adds that wind farms themselves probably do not affect bees in terms of increasing their productivity.

"But they do not bother the bees either, and this is a big plus, because until now the prevailing view was that if wind farms harm mammals and birds, they also harm insects, including honeybees" - he says. He adds that there has been no research on this subject; so far, only the effects of wind farms on mammals and birds have been studied.

According to Karwan, the lack of negative impact of wind farms on bees is partly due to these insects` higher noise tolerance. "Bees tolerate noise very well. This was noticed already in the 1970s and 1980s: many railway workers placed beehives close to railway tracks, and the bees functioned amazingly well in this environment" - he explains.

He also points out that the materials used to build hives drown out the sounds: insects can seal them very well with propolis, commonly known as "bee glue". "They use it to fill all the nooks and crannies, they can +wall+ the entrance to the hive and leave only a tiny hole the size of one bee before the cold season, thus isolating themselves from the environment" - Karwan explains.

He mentions that bees from families living close to wind farms produced much more propolis to protect themselves against more difficult environmental conditions.

Research was conducted in 2013-2015 in a stationary apiary, in the village of Młynary, commune of Moryń (Zachodniopomorskie) as a control group. The experimental group, called the "wind turbine" apiary, was located at the nearest wind farm Kamionka near Mieszkowice.