Experts: Emotions associated with sports increase the risk of a heart attack 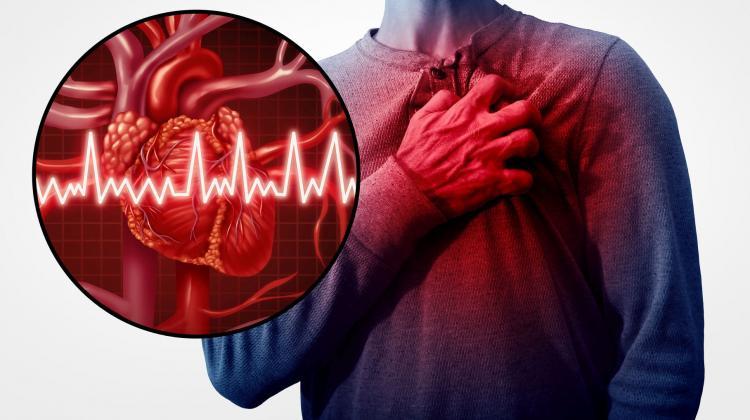 On the day of an important sports event, the risk of heart attack in men may increase by up to 11% in relation to the initial risk, warn experts of the campaign "Heart attack - time is life". That is why it is worth to know the symptoms of myocardial infarction and respond quickly, they point out.

The first information about the increased cardiovascular risk associated with sports emotions was published in the 1970s. It is also confirmed by the research of cardiologists from the Silesian Center for Heart Diseases in Zabrze, who analysed Polish data from 2006-2016.

"The results confirmed that heart disease can be associated with strong emotions that also occur when watching sports games and cheering" - says Prof Mariusz Gąsior, head of the III Chair and Department of Clinical Cardiology of the Medical University of Silesia.

Experts analysed the risk of death and hospitalisation due to cardiovascular events on football match broadcasting days and three days before and one day after the broadcast.

"The game day was associated with a 6% higher risk of death On the day after the broadcast, the risk of death was 4% higher, the risk of hospitalisation due to atrial fibrillation was 17% higher and relative risk of the total occurrence of the analysed adverse cardiovascular events, i.e. myocardial infarction, stroke or pulmonary embolism, was 3% higher" - adds Dr. Piotr Desperak from the III Chair and Department of Clinical Cardiology of the Medical University of Silesia.

Among the factors predisposing to a higher risk of death as a result of cardiovascular events, the researchers named: male sex (11% increase in risk), dramatic course of the event (risk increase by 25%) and ending in a draw (23% increase in risk) .

The experts of the campaign "Heart attack - time is life" explain that during exciting events, such as sports games, blood pressure increase and pulse acceleration occurs. These changes may be additionally compounded by cigarette smoking or alcohol consumption, and the accumulation of these factors may lead to a heart attack, also in young people.

Importantly, young people have a greater tendency to ignore the symptoms of heart attack, which include pain, burning or tightness in the chest, which may radiate to the shoulder, arm, neck or jaw. Due to the low awareness that infarction may occur at a young age, these symptoms are mistakenly attributed to the emotions experienced during sports competitions. This, in turn, causes delayed ambulance call and delayed medical assistance for people with a heart attack. The data from the Polish Registry of Severe Coronary Disease indicate that Poles wait on average two hours before making an emergency call.

Therefore, experts agree that if you suspect a heart attack, you must immediately dial the emergency number 112 and call an ambulance.

The organizers of the campaign "Heart attack - time is life" are the Silesian Center for Heart Diseases and the Silesian Center for Heart Diseases Foundation in Zabrze, and its strategic partner is Philips. The honorary patron of the campaign is the spouse of the President of the Republic of Poland, Agata Kornhauser-Duda. (PAP)