Storks on the way to Africa; heat expedited departures 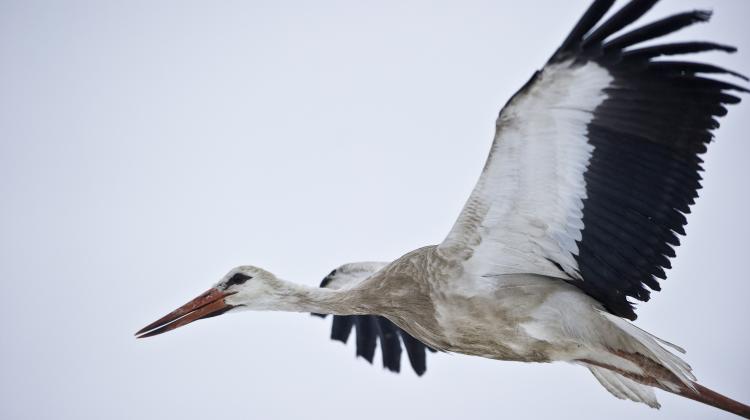 Some of the Polish storks have already left for Africa. "The earlier departures were due to the weather. Hot weather is good for gliding flights of these birds; they lose less energy and cover greater distances" - told PAP ornithologist Dr. Marian Stój.

Storks will reach their destination by November, and in February they will embark on their return journey to Poland.

"A few days ago in the Beskid Niski watched a flock of 150 birds of flying to the south-east, to their wintering grounds. I have received reports of other groups flying to Africa. Moreover, the stork that had a telemetry transmitter was located over Turkey" - emphasised Dr. Stój.

"In this weather birds can move in a gliding flight. As a result, they lose less energy, which they need during migration. They cover greater distances" - explained the ornithologist.

Storks fly up to two hundred kilometres a day; they always fly over land and only during the day.

Storks nesting in Poland cross the sea over the Bosporus. Then they fly through the Middle East and Israel, continue along the Nile and ends their journey in the southern part of Africa. They reach their destination by November. In contrast, European storks living west of the Elbe, reach Africa over Gibraltar. While wintering in Africa they live in flocks.

They will embark on their return journey in early February. Their return is much faster, less than six weeks; the reason for haste is the desire to reach the nest as soon as possible.

The ornithologist noted that not all storks return in the spring. "Most of the young, sexually immature birds remains in Africa up to three years. Some of them, however, will return to Poland and will live in the meadows in small groups. They much later than mature birds, usually in mid-May" - said Stój.

White stork is a protected bird. It lives in Central and Eastern Europe, Pyrenean and Balkan peninsulas, as well as in North Africa, Asia Minor and Central Asia.

It reaches one meter in length, with a wing span up to two meters. It can be found in wet meadows, near human settlements. It feeds on invertebrates, fish, rodents, amphibians and reptiles - for example, it eats grass snakes and vipers. In Poland there are over 50 thousand pairs.