Wild bees on a junk diet 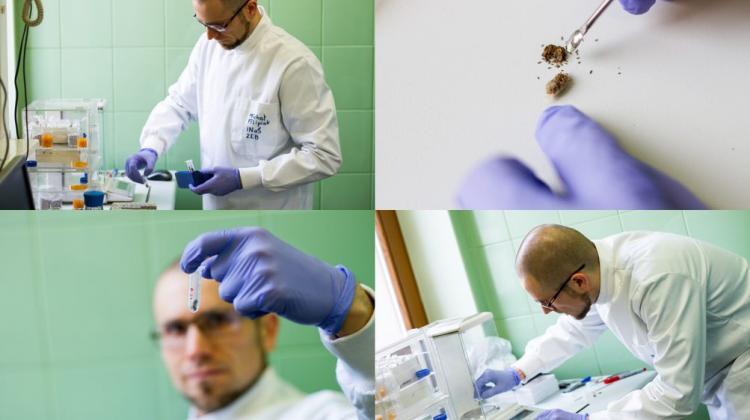 Some plants that are considered bee-friendly may negatively affect the development of these insect`s larvae. The plants that produce pollen unsuitable for wild bees include lavender, poppy, sunflower, oilseed rape and maize, according to the research of Dr. Michał Filipiak from the Jagiellonian University.

Young body needs a properly balanced diet. We know how important this is for children. The same applies to animals. Owners of puppies or kittens are well aware of this fact: there are special foods for young animals, slightly different from adult pet foods. Similarly with bees - their larvae need food with a different composition than adult insects.

The owners of large-scale crops should take it into consideration. The good condition of the bee population is in their best interest, suggests Dr. Michał Filipiak from the Institute of Environmental Sciences of the Jagiellonian University.

He investigated whether the quality (nutritional value) of pollen from various plant species can affect the growth and development of wild bee larvae. It turns out that some plants referred to as nectar-producing or pollen-producing and considered bee-friendly may adversely affect bee populations, limiting the growth and development of larvae feeding on unbalanced food. The results were published in the Journal of Applied Ecology. The researcher informed about his research in a release sent to PAP.

"When choosing plants that are friendly to bees, we focus on the amount of food they produce, but ignore its quality" - he warns.

In the published paper, the researcher shows that plants producing pollen that is unsuitable for wild bees include lavender, poppy and species from the Asteraceae family (such as dandelions and thistles) - generally considered to be friendly to bees, as well as sunflower, oilseed rape and maize, cultivated plants that often occupy large areas as monocultures.

The researcher concludes that similar results have been obtained in an earlier project concerning honeybees. "It can therefore be assumed that the knowledge regarding the quality of pollen applies to all bees" - he comments.

The study covers 62 species of plants. It is the first database on the quality of pollen for the larvae of wild bees. An earlier study on the honey bee provided data for 85 species of plants. According to Dr. Filipiak, in Poland alone there are approx. 3 thousand plant species that produce pollen and nearly 500 species of bees with different nutritional requirements. In his opinion, the publication is just a drop in the ocean of needed data.

The biologist`s work is based on the ecological stoichiometry research program - a relatively new approach in environmental biology. For the first in the scientific literature, ecological stoichiometry allowed to compare the bee larvae demand for specific, important nutrients, with the supply of these components in the pollen produced by various plant species.

An insufficient amount of atoms of specific elements (needed in the growth phase to build molecules important for the body) prevents the development of a healthy adult organism. Thus, the production of each single healthy bee depends on the availability of balanced food in the larval phase. Since this mechanism affects the viability of the entire population, it can be said that the condition of the bee population is dependent on access to pollen of high nutritional quality.

The researcher adds that it is also necessary to distinguish the needs of wild bees that do not form colonies and do not produce honey - from human needs related to the production of honey by a breeding animal: honey bee. "Honey plants will not help wild bees feed their larvae. Wild bees need plants that produce pollen with a balanced chemical composition" - says the expert from the Jagiellonian University.

He explains that nectar gives adult bees the energy they need for their activity. Pollen is used as a building material, from which larvae create their own organisms. To "build" a healthy bee, you need high quality pollen, rich in phosphorus, sodium, manganese, magnesium, potassium, iron, calcium, nitrogen, zinc and copper. Molecules containing atoms of these elements are used to build tissues and organs, protect against pathogens, regulate physiology, and keep the whole organism in good condition. Meanwhile, bee-friendly plants are defined on the basis of the amount of produced food and the frequency of visits by adult insects seeking energy (nectar). As a result, protection measures aimed at improving the food base of wild bees are ineffective.

"In my work, I showed that to improve the bee`s food base it is not enough to plant the plants that are eagerly visited by pollinators, now promoted as bee-friendly. It is important that the bees also have access to plants that produce pollen of an appropriate quality, allowing for a balanced diet of larvae. Such plants should be included in the seed mixtures currently advertised as bee-friendly, for flower lawns or flower belts created for bees" - says Dr. Filipiak.

"This is just the beginning of research on the pollinator larvae demand for nutrients in the context of the supply of these components in the pollen of various plant species. Research teams are being formed around the world to continue this research. I am involved in creating such a scientific consortium, bringing together research teams from several European countries and the US. I`m also helping the team that is starting in New Zealand. In Poland, it is difficult for me to create a research team due to my young age, but I hope that the situation will change and I will also gain trust of Polish senior colleagues" - says Dr. Filipiak.

In his article, the scientist concludes that while working to improve the bee`s food base, one should take into account key plant species that produce pollen rich in important nutrients, with a chemical composition that allows to balance the diet of bee larvae. So, when you sow lavender for bees, make sure that there is also wild clover, St. John`s wort or charlock mustard nearby.

The research is part of a project financed by the National Science Centre.