We are only beginning to understand mud dragons 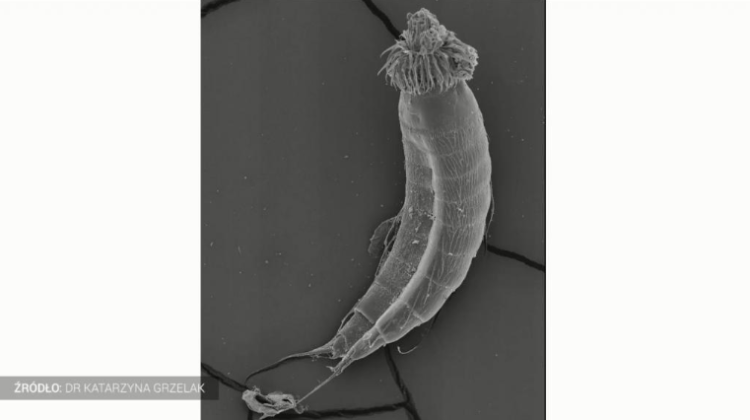 Dragons exist not only in novels and legends. Mud dragons, or kinorhynchs, are miniature (1 mm or less) invertebrates. For millions of years, they have lived almost all over the world and everyone could meet them while walking on a sandy beach or sea bottom. A Polish researcher recently described eight new species.

Eight previously unknown species of these microscopic animals from the Spitsbergen region were described this year by Dr. Katarzyna Grzelak from the University of Lodz, who is the only person in Poland and one of a dozen or so in the world who deal with mud dragons on a daily basis. She named them after dragons known from George R.R`s Martin`s "A Song of Ice and Fire" novels and John R.R. Tolkien`s "Silmarilion."

The researcher emphasizes that probably not many people realize that while walking on a sandy beach or sea bottom, they have an amazing microworld full of all sorts of life under their feet. It is meiofauna, a group of animal organisms with body sizes of 32 μm to 1 mm, which inhabit the spaces between the sludge grains and are invisible with the naked eye. It is estimated that up to 50,000 of these organisms can be found under one footprint.

One of the groups belonging to the meiofauna are kinorhynchs, often referred to as "mud dragons". Their Polish common name translates to "sea dragons". They live practically all over the world, in various sediments (not only muddy ones) and regardless of whether the ocean is ice-cold or tropical, deep or shallow, kinorhynchs can find a suitable place to live.

"I prefer the name sea dragons, which characterizes the environment in which they live very well, because they are exclusively marine organisms, which means that you will not find them in sediments of freshwater systems" - explains the researcher, who is also an assistant professor at the Institute of Oceanology of the Polish Academy of Sciences .

Kinorhynchs really look like miniature dragons with spikes all over their body. "They have numerous spikes both along the ridge and on the sides, and numerous plates around the neck. The most characteristic feature of their bodies is the head equipped with rings of hooks, which they can extend and retract, a bit like turtles, which hide the head under the shell" - adds Dr. Grzelak.

The head helps them move. To move through the sediment, mud dragon slides its head out of the cylindrical body, sticks the hooks into the sediment grains and `pulls` its body forward. After anchoring, its head is retracted into the body and then the process repeats itself. But for what other reasons mud dragons hide their heads - that is not known exactly.

At first sight, mud dragons may resemble small crustaceans, but they have nothing in common with that group of animals. Their closest relatives are two other, also little known groups of marine invertebrates: loriciferans (Loricifera) and priapulids (Priapulida). Fossils suggest that these two groups have been living on our planet for hundreds of millions of years. And although mud dragon fossils have not been found yet, scientists believe that they also have a similarly impressive past.

Although these animals have been known since the middle of the 19th century, we still know little about them. For many years, this group has been neglected in scientific research, and today only a dozen people in the world study these organisms.

"That is why we still do not know the answers to very basic questions: what these organisms eat and what role they have in the ecosystem, we also know very little about their species richness and environmental preferences. Intensive research is currently being conducted in various regions of the world, focussing precisely on species diversity of mud dragons" - explains Dr. Grzelak.

Scientists believe that kinorhynchs , like other meiofauna organisms, can help counteract sudden oxygen level drops at the bottom of the sea. They participate in the bioturbation process, which means that the upper part of the sediment is constantly being mixed, thanks to which oxygen is introduced into the deeper sediment layers. In addition, it is believed that they can break down a number of complex organic compounds into simpler compounds, more easily available to other consumers.

Researchers also suspect that the main source of food for mud dragons are bacteria and microalgae, such as diatoms. "It would be very interesting to use molecular methods to study the entire mud dragon diet" - emphasises the researcher.

Mud dragons` behaviour is different from that of other inhabitants of the seas. An example of this is the reproduction process. Although it is not fully understood, researchers believe that the female copulates with the male only once in its life cycle.

The female produces one egg that is fertilized with previously obtained male reproductive cells. Later the female cares of the fertilized egg, covering it with protective coating of grains of sand or silt and organic material. Dr Grzelak emphasises that this is quite an unusual phenomenon, because most of marine mothers simply send hundreds or thousands of eggs to the water, hoping that they will be fertilized and some of them will become the next generation.

Currently, just over 250 mud dragon species are known, but it is estimated that this is a small percentage of their actual diversity. Dr. Grzelak conducts research in the Arctic, from where only 17 species of mud dragons were known until now. A proof of their still undiscovered diversity is the fact that only this year Dr. Grzelak found and described eight new species of kinorhynchs in the sediments of Spitsbergen, which is the main area of her research.

"The actual diversity of Arctic mud dragons is incomparably greater than what we knew before" - she adds.

The researcher admits that discovering and describing these new species was an amazing scientific adventure and a reward for hours spent with a microscope. She drew inspiration for naming the new species from literature.

Some species` names refer to the names of dragons from the George R.R. Martin`s saga "A Song of Ice and Fire", adapted for TV and commonly known as "Game of Thrones": Drogona, Rhaegala, Balerion and the "mother of dragons" Daenerys Targaryen: Echinoderes drogoni, E. rhaegali, E. balerioni and E. daenerysae.

Dragons from John R.R. Tolkien`s "Silmarilion" were an inspiration for the species` names: Cristaphyes glaurung, C. scatha and Pycnophyes ancalagon. The last newly discovered mud dragon - C. dordaidelosensis - meaning "living in the land of eternal cold" - is named after the Tolkien`s land of Dor Daidelos.

"I hope that in this way I managed to connect this mythical world with real dragons" - the researcher concludes.

Katarzyna Grzelak - assistant professor at the Institute of Oceanology PAS in Sopot - is currently a postdoctoral researcher at the University of Lodz as part of the National Science Centre`s FUGA competition. She works on meiofauna in the European Arctic region as part of research funded by the National Science Centre and with the support of EU FPVII funds from the SYNTHESYS program. She is a beneficiary of a scholarship for outstanding young scientists awarded by the Ministry of Science and Higher Education. (PAP)