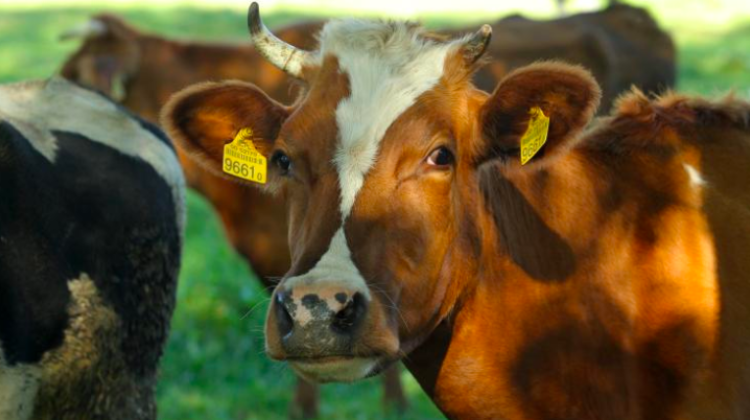 Cows do not digest grass at all, says Prof. Zygmunt M. Kowalski from the University of Agriculture in Krakow. Other organisms do it for them. We do not have these organisms in our digestive tract, so we could not eat grass.

During the Science Picnic, throughout the day we collected questions that visitors wanted to ask the scientists. Now we ask researchers some of these questions. With the question "Could we eat grass?" we turned to Prof. Zygmunt Kowalski. The professor conducts research related to feeding ruminants, mainly dairy cows and calves.

"Man is omnivorous. They way our digestive tract is built, we can eat bread, meat, salad, vegetables, sweets and drink milk. But we can not digest grass. Cows can`t do that on their own either. Herbivores get help from microorganisms that live in their stomachs or intestines. We, without such an army at our disposal, could eat grass, but it would end up in our faeces undigested" - says Prof. Kowalski.

He emphasizes, however, that although we can digest only a small part of plants such as lettuce, eating them is beneficial for our large intestine. When we eat rocket, the bacteria that line the interior of the large intestine cause fermentation. This, in turn, causes the production of volatile fatty acids. We do not benefit from these acids like cows do, but our intestinal cells will benefit from them. That is why we should eat salads, because they reduce the risk of intestinal cancer. We do eat vegetables to sustain us - like cows do - but vegetables help us maintain clear bowels, defecate easily and avoid diseases.

The professor respects vegetarianism and veganism, but remarks that these are attitudes deviate from the natural nutrition of man, an omnivorous creature after all. Guided by health reasons, not fashion, we should remember that proper nutrition consists in providing the body with the right amounts of carbohydrates, proteins and fat. On the other hand, man, like pig and other omnivorous animals, can not eat grass or straw, because they are fibrous feeds (in this case it is difficult to used that word "foods"), containing a lot of cellulose. They are not far to woody forms that contain an ingredient called lignin.

Why can a cow consume such a feed, if it does not digest grass? "Cows have little helpers, bacteria and tiny animals (protozoa) that digest grass for them. Cows only create the necessary living conditions and have billions of such anaerobic microorganisms in their digestive tract. One litre of liquid taken from the stomach contains one hundred million cells of bacteria, and the rumen, the main part of the four-chamber stomach of a cow, has a volume of 200 litres" - explains Prof. Kowalski.

He describes that a cow pulls grass from the pasture (it does not bite, because it has no teeth), then swallows it, and then the grass goes to the rumen, which is a large vat containing bacteria and protozoa. The microorganisms start digesting grass with their enzymes, but grass is still too thick. That is why the cow eructs and grass returns to its mouth. The animal begins to chew. It chews for a minute, then stops and starts again. This way, it shreds grass into smaller pieces and swallows it again. This helps bacteria digest it.

"When we eat a biscuit, a potato or a delicious roll, we will digest starch. Starch will form glucose. In the case of a cow, there are ingredients in the stomach that we have in very small amounts, unlike the rumen of a cow. They are volatile fatty acids, which are absorbed into the blood. Blood transports them to the liver, where they are converted into glucose. So we live on glucose supplied from the outside, and cows live on glucose that they themselves produce in the liver. Therefore, cattle does not compete with men, lions or bears for food" - says the scientist.

We asked one more question: whether a cow, eating only grass, can become obese. "Yes, absolutely" - Prof. Kowalski says. "A cow can eat so much grass and weeds that there will be a lot of volatile fatty acids in the intestines and its liver will produce too much glucose that will start to accumulate in the form of fat".

Professor pointed out that the biggest problem with huge appetite occurs on high milk yielding cow farms. These animals are selected to eat a lot. Today, cows eat twice as much as they did 30 years ago. While they are not genetically modified, their predisposition is the result of several generations of selection. As a result of choosing mothers and fathers giving high milk yielding offspring, the genotype of a cow that eats for two has become established.