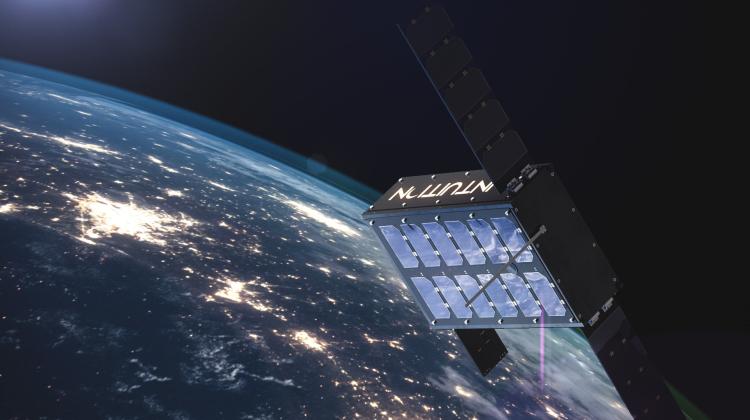 Intuition-1: this is the name of a commercial satellite that is being developed by a consortium of Polish companies. The task of the satellite will be Earth observation with a unique system that will allow to process data on board. The creators want the satellite to be launched into orbit in 2022.

The Intuition-1 satellite is one of the projects of the consortium FP Space, formed by KP Labs, FP Instruments and Future Processing. The Intuition-1 mission objective will be to conduct Earth observation using a hyperspectral camera and advanced onboard data processing based on deep neural networks. The creators of the satellite explain that onboard data processing is an innovative idea compared to the existing satellites, and those currently in development.

"The amount of data generated today by Earth-imaging satellites is huge: it's hundreds of gigabytes per hour. Frequent communication sessions are necessary to download that amount of data to Earth. That means that a large number of ground stations are needed in order do that reasonably well" - explains Dr. Krzysztof Czyż, technical director at FP Instruments, responsible for the construction of the satellite.

In addition, a significant part of the images that reach Earth are discarded, for example because of too much cloudiness. On top of that, even the latest images are quite old, e.g. from a week ago. "That is why we came up with the idea to process them in orbit" - the researcher emphasises.

Intuition-1 will be equipped with a specialized camera with high spectral resolution in the visible range and near-infrared. Dividing this range into 150 channels will allow to obtain much more information compared to the existing instruments. The increased number of channels will allow to increase the quality of satellite images, and image segmentation onboard the satellite will allow to reduce response time to monitored events. At least a 100-fold reduction in the amount of data transmitted from the satellite to the ground station will be possible.

"We want to image the Earth in very high resolution, which is why we will observe relatively small areas. We want to focus on observations of Europe" - admits Dr. Czyż.

The consortium members plan to initially build one satellite, but in the future they intend to build more satellites that will eventually form a constellation. "The assumptions are that the satellites will be different, but their main common task will be Earth observation. Each satellite will also be used to test a new technology" - says Dr. Czyż.

The technology his team is working on can be used in precision agriculture. "Hyperspectral imaging allows to detect plant diseases, observe their propagation and select a method to combat these diseases; check whether spraying should be applied to a given section, whether it is effective or must be repeated. But images must be up-to-date. It would be ideal if the images of a given area were made several times a day" - describes Czyż.

In his opinion, the most interesting application of satellite images is using them for air quality monitoring. "There are observational techniques that allow to extract information about the presence of dangerous substances in the air. But for us this is still a distant future" - he says.

Consortium members will also create software for interpreting satellite data transmitted to Earth from orbit. They are also building a ground station in Gliwice, which will be initially used for the PW-Sat2 satellite built by students of Warsaw University of Technology.

Intuition-1 will be a cuboid satellite with dimensions of 10x22x36 cm, and its approximate weight will be 15-20 kg. The cost of its launch is about PLN 100,000 per 1kg. The costs of technology development should be added to this. The satellite will be launched into low Earth orbit (LEO). Its creators want it to happen in 2022. The project is co-financed by the National Centre for Research and Development.