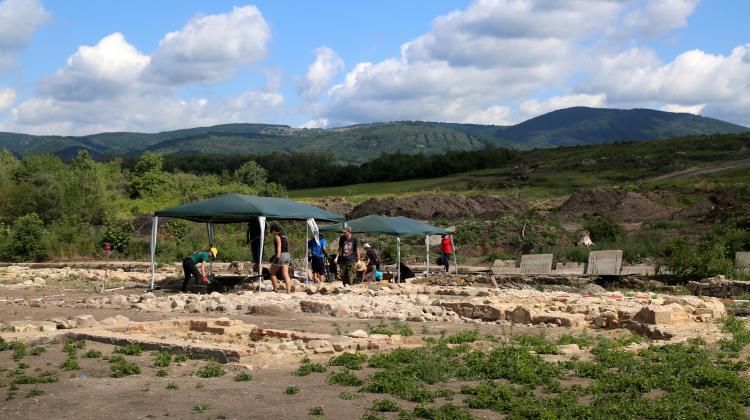 The centre of the abandoned village of Libkovice was occupied by the St. Archangel Michael Church; researchers from Poland study its relics and the surrounding cemetery. Photo by P. Konczewski

Polish researchers discovered more than 90 graves, including ones from the Middle Ages, during excavations in Libkovice (the Czech Republic). On some remains, they found traces of rare Legg-Calvé-Perthes disease. In a few years, the area of the former village and the cemetery will be destroyed by a brown coal mine.

The village of Libkovice in north-western Bohemia was abandoned in recent decades. Only ruins of houses, public buildings and cemeteries remain. In its heyday, it had a population of over 2,000.

"There are no houses from the 20th century; the village was completely historic, it lasted for over 800 years. Nineteenth-century buildings contain elements, for example basements, of medieval houses - the same is true for the church, the mills and the tavern" - says the research project leader Dr. Paweł Konczewski from the Wrocław University of Environmental and Life Sciences. It is because of the high historic value of the village that excavations are carried out. Even the layout, roads and squares are medieval, the archaeologist says.

"We are participating in a unique project on a European scale. There are no other similarly extensive excavations aimed at exploring a village and its surroundings" - the researcher points out.

In addition to the archaeologist Dr. Konczewski, core team members are anthropologists from the Department of Anthropology of the Wrocław University of Environmental and Life Sciences: Dr. Barbara Kwiatkowska and Dr. Jacek Szczurowski.

The Polish team focuses their efforts on exploring the cemetery. Over 40 out of nearly 100 graves discovered so far are from the Middle Ages; the cemetery was used from the turn of the 13th century until the 18th century. Later, another cemetery was founded outside the village. Anthropologists have already performed preliminary analyses of both medieval and modern human remains.

In addition to diseases such as tuberculosis or syphilis, anthropologists have identified two cases of Legg-Calvé-Perthes disease; they come from the modern period (16th-18th century). This is a very rare disease, which is why it is also rarely recorded during archaeological excavations. To date, in the case of Poland, only two cases are known from excavated material (18th-19th century), discovered in Radom by scientists from the Cardinal Stefan Wyszyński University. This disease is an avascular osteonecrosis; necrosis covers the head of the femur. The disease mainly affects boys between the ages of 4 and 8.

"Further research on the remains may contribute to a better understanding of this disease, the cause and formation process of which are not entirely known" - the scientist emphasises.

"The possibility of studying the entire rural cemetery is a scientific sensation on a European scale; such excavations usually cover a fragment of the cemetery or concern urban cemeteries. And yet in the Middle Ages and the early modern period, most Europeans still lived in the countryside. We still know little about them, because rural cemeteries are rarely studied" - Dr. Konczewski says. In his opinion, a detailed analysis of bones can provide a lot of valuable information about people who lived in the area several hundred years ago.

After research is completed, all excavated human remains will be reburied in one of the nearby cemeteries; they will not become a museum collection.

Archaeologists from many other countries including the Netherlands, Kyrgyzstan and Finland are involved in the excavations in the abandoned village, and the entire project is coordinated by researchers from the Czech Republic.

This year, Polish excavations in Libkovice will continue until the end of August and will be resumed next summer. In a few years, the site of Polish research will become an excavation site of the brown coal mine Bylina. The company that owns the excavation finances the extensive research work. (PAP)