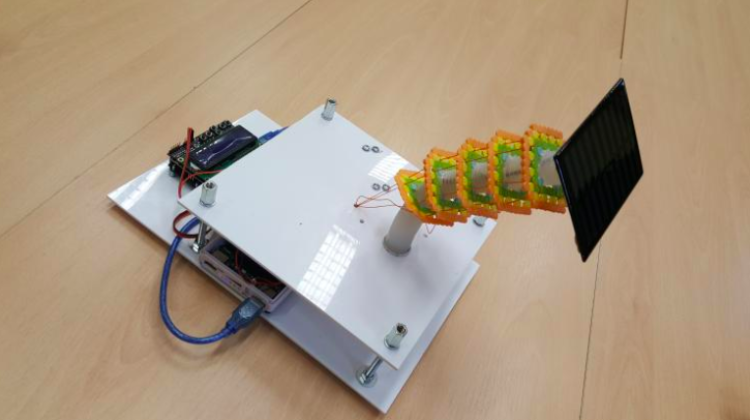 A student of AGH University of Science and Technology in Kraków has built an original version of the device for controlling solar panels. The structure looks like a stem and mimics the movements of plants, following the most favourable sunlight conditions.

"Such sun-tracking solar panels exist, so innovation is not about the mechanism in general, but rather its form - it`s about the aesthetics, appearance of the device and the imitation of phototropic movements of plants" - the author of the project Karolina Gocykka told PAP.

The student is currently trying to patent the idea and says that in the future the original device could be marketed.

The student`s design assumes placing a solar panel on a stem-shaped structure, which has smaller solar cells and controlling mechanisms connected to them. The approx. 30 cm high stem is flexible and can move freely, following the changing position of the sun. Thanks to this, the "tracker" allows the panels to change their inclination depending on the sunlight, in order to use solar energy as effectively as possible.

The stem can be built in many ways and adapted to different environments. This, in turn, allows to place cells anywhere, for example on a roof or other sloping surface. The modular design makes the mechanism resistant to wind or frost. Thanks to the flexibility of the device, the panels can be placed in a large space, in which they can interact well with each other, even if they are densely distributed. According to the young designer, this functionality can increase the efficiency of existing solar farms, in which panels had to be installed at certain distances.

The student explains that the solution also allows to create small solar farms for household use, as well as mini power plants that can be placed on a desk or window sill. The latter can be used to charge devices such as phones or powerbanks.