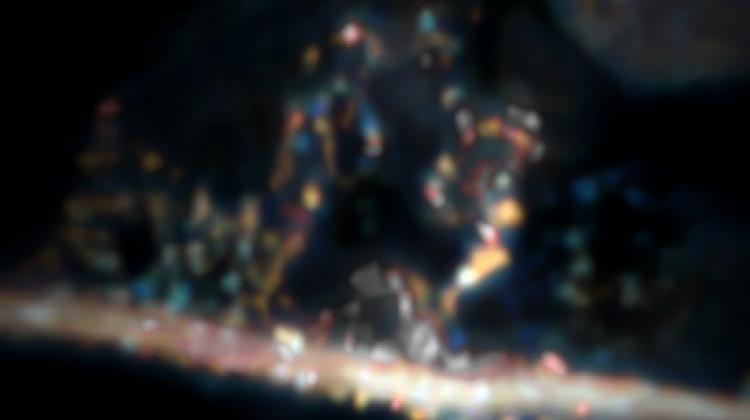 Neurite and synapses (round elements attached to the 'branch'). The sample imaged by an optical microscope is located at a depth of 80 microns, under the surface of other cells. Credit: Dr. Piotr Zdańkowski, ACS Nano https://doi.org/10.1021/acsnano.9b05891

Polish researchers have shown how to use an optical microscope to image nanostructures hidden under record-high thick tissue `blanket`. This solution will allow to see what is happening in the cells in their natural environment.

Classic methods of optical microscopy allowed to see at high magnification only what was happening in the top layer of the examined sample, that is, what was directly under the microscope slide. Meanwhile, biologists and medics would like to see with high resolution what hides inside the tissue, at a certain depth of the sample. Because it is only there, in natural conditions under the `blanket` of other cells, the processes that we do not yet understand sometimes occur. In this situation, scientists from the Warsaw University of Technology, assisted by experts from the University of Dundee in the United Kingdom and the University of Technology Sydney in Australia, come to the rescue.

`We have developed an optical microscope that allows to view structures and cells on a nanoscopic scale, hidden under other cells`. - says Dr. Piotr Zdańkowski from the Faculty of Mechatronics of the Warsaw University of Technology. 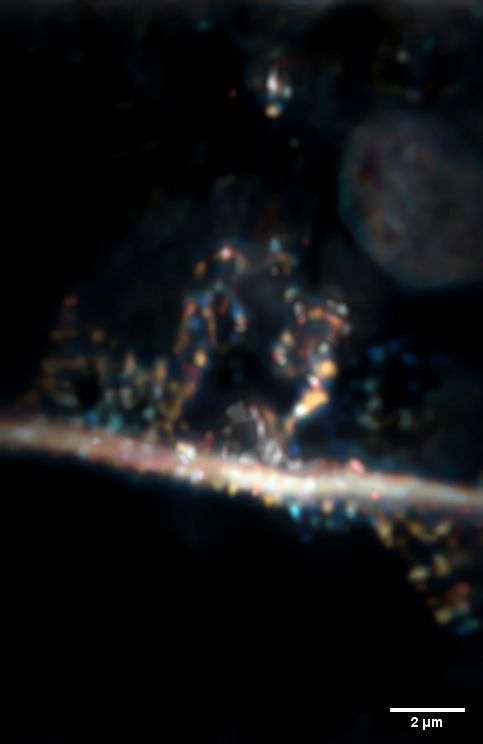 Neurite and synapses (round elements attached to the `branch`). The sample imaged by an optical microscope is located at a depth of 80 microns, under the surface of other cells. Credit: Dr. Piotr Zdańkowski, ACS Nano https://doi.org/10.1021/acsnano.9b05891

He says the new method will allow to see objects 0.2 micrometres in diameter, covered with tissue equal to 80 micrometres (0.08 millimetres), under a microscope. This means that the studied object can be over 400 times smaller than the thickness of the tissue that covers it. This is a record!

Translating it into the macroscopic scale, it is like a princess being able to see a pea while standing on top of a pile of feathers and mattresses.

In their research, scientists use a super-resolution fluorescence microscope with STimulated Emission Depletion (STED). In this microscope, the sample is illuminated with visible light (and not electrons or X-rays). Dr. Zdańkowski himself has built such a device. According to the researcher, there are only a few instruments with such optics in the world.

In STED microscopy, to view a very small biological object, a dye must be used and a fluorescent molecule must attach to the object. When the sample is illuminated, e.g. with a blue laser light, the dye glows green. Additional methods allow to clarify the image even more.

For the development of techniques in the field of STED microscopy, its creator, Stefan Hell, received the Nobel Prize in Chemistry in 2014.

`We propose another improvement of the device`, says Dr. Zdańkowski. By using elements of adaptive optics, known and widely used in astronomy, you can see structures previously unavailable to the human eye. What`s more, by using clever de-noise algorithms, you can additionally separate important information from noise.

`Noise can effectively mask small-size structures, which is why its efficient numerical minimization is so important`, adds Dr. Maciej Trusiak, one of the co-authors of the project.

Dr. Zdańkowski`s team showed how to view stem cell nanostructures (such as neurites), hidden under a thick blanket of other stem cells. The research, whose lead author is Dr. Zdańkowski, appeared in the prestigious journal ACS Nano.

When someone has astigmatism (an optical aberration), their eye distorts the image and prevents them from seeing well. To correct this, the patient gets lenses that distort the image to compensate for the distortion in the eye. A similar solution (introducing aberrations to reduce opposite aberrations) is used in Dr. Zdańkowski`s microscope.

`The image that passes through the cells is deformed`, says Dr. Zdańkowski. He explains that the cells are fairly transparent, but have a different (and locally variable) density than air. Light travelling through tissue is refracted many times. `We can, however, computer calculate light distortion, the aberration that blurs the image`, he says. And then it is possible to model the light that illuminates the object so that the camera creates an image as clear as possible.

Simple lamp or laser light is not enough to illuminate the sample in the solution developed at the Warsaw University of Technology. Laser light should first pass through the aberration map prepared for a given tissue. Thanks to this, the light can cover a rather complicated path from the microscope to the studied structure and from the structure to the microscope camera and the resulting image will be clearer. The designing stage therefore concerns not only the optical system and the numerical image reconstruction algorithms but also the `tailor made` shape of the illuminating beam.

The change in lighting will be analogous to the situation when a person with astigmatism puts on a lens: the error will be offset.

`It is still possible that someone will beat us in a while and show how to watch even smaller samples at even greater depths. That is why it is so important to properly finance scientific research in order to remain an important player in this race`, the scientist concludes.

The research was partly funded by European Marie Curie Actions (PHOQUS) grant and domestic OPUS grant from the National Science Centre and NAWA.