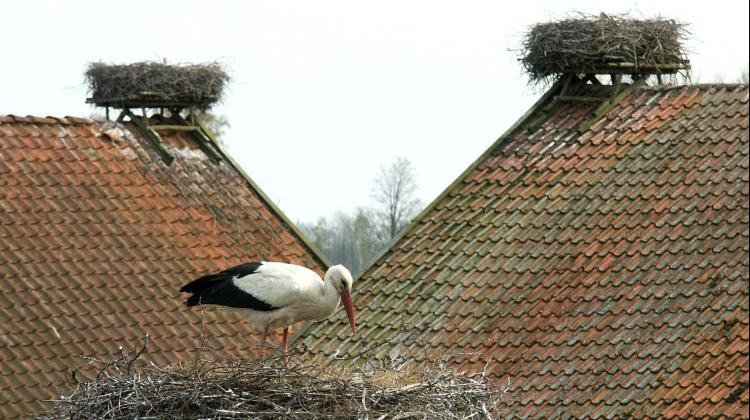 Spring. The stork is its inseparable symbol. Who does not know it? It is often drawn by children, it appears in literature, tales, songs. It is a symbol of happiness and wealth. Or maybe it would be better to write: it used to be...? The change in the perception of the stork is literally taking place before our eyes.

Recently, we have been observing a decrease in the level of knowledge of nature - not only general knowledge, but also knowledge about common species, close to human. Such as the stork. This has unpleasant consequences: from a beloved bird symbol, in various places the stork becomes barely tolerated, and information about it tends to be biased and negative. Examples are numerous. It is difficult to verify this information, but it is used by people who have contact with this species, especially the inhabitants of villages.

What is the source of this situation? The reason is quite simple - generational change and migration of people from cities to the countryside. Residents of cities are less tolerant towards storks than people who have been living in the countryside for years. Picturesque stork nests, so often seen in paintings and photographs, now start to bother people: they turn out to be "too heavy" for roofs, and storks themselves that can "whiten" their nest area with their faeces, are treated with hostility and reluctance. And although the mass of stork nests has not changed in years, and they do not dirty their surroundings more than they used to - in many places they have become undesirable.

That is why for three years ornithologists from the Polish Society for the Protection of Birds (Polskie Towarzystwo Ochrony Ptaków, PTOP) have been running a project aimed at mitigating the human-nature conflict. In the last decade, PTOP members noticed a huge decline in people`s tolerance in relation to storks in the countryside. They also received an increasing number of calls concerning moving the nest, which stopped being a symbol of happiness and became a symbol of danger and problems instead.

The data dating back to the 1950s, developed by Dr. Andrzej Wuczyński from the Institute of Nature Conservation PAS, paint a completely different picture. Among several hundred surveys asking if the stork is considered a useful bird in the countryside, only a few contain a negative response. Respondents almost always wrote: useful, household decoration, helps farmers, brings luck. The stork used to be treated with sympathy and respect. Harming adult birds, chicks or damaging a nest was considered a serious offence or sin.

Now the perception of stork changes right before our eyes.

The media continue to repeat simple messages, depicting storks as evil birds. But it should be noted that this is a complete anthropomorphisation and a rather infantile interpretation of bird behaviours - including the stork.

Storks - "good" and "evil" aside - are a great example of the complexity of natural phenomena. Studies show that these birds are an important indicator of the quality of the environment (they are good bioindicators). Within the stork territory there is a greater variety of breeding species of birds compared to places that storks have abandoned. And this despite the fact that the stork is a predator and a food opportunist: it feeds without special preferences, on whatever happend to be the easiest prey.

Storks mean more diversity not only around the nests, but also in the nests themselves. These amazing structures, the interior of which resembles soil, can reach impressive sizes and huge mass (on average almost 400 kg). For this reason, many of them are inhabited by vertebrates, invertebrates, plants and fungi. The most abundant are representatives of the flora (over 100 species), mites (over 30 species) and birds (over 20 species). The most interesting inhabitants are ants, wasps, saproxylic insects, squirrels, rats and owls. Stork nest is a real refuge of biodiversity. Their protection gives many species a chance to survive.

Due to cultural reasons, the family life of storks attracts considerable interest. This is evidenced by the growing number of webcams placed in nests (currently over 500 in Europe). Storks are usually loyal partners. Cheating is very rare for this species, rarer than in other species of birds, even when they nest in colonies. That is why for centuries the stork has been a symbol of marital fidelity, reflected in some beliefs, for example in Old Germanic mythology.

In addition, the white stork is the hero of many superstitions, proverbs and omens. People eagerly await the first stork in a year. If the first bird is noticed in flight, the observer will have a good year, and if the first stork is spotted standing on the nest or meadow - problems can be expected. One of the most widespread beliefs today is that the stork brings children; the house where the bird sat, would soon be home to a newborn. And even without complicated research it is known that people live better in a clean and diverse landscape, in contact with nature. In such conditions, they are healthier, less stressed and have more children. The Central Statistical Office confirms that more children are born in the countryside than in cities. The question is: what will happen if there are no more storks?

These birds belong to caring parents. In Poland, they can have up to six chicks (although usually only there are two or three), which are fed with huge amounts of protein. From hatching to leaving the nest, one young receives about 34 kg of food. To meet this demand, parents have to work very hard. Unfortunately, we are seeing a significant decline in the number of large stork families. It is not only a human-like demography, but a sad observation of reality. Transformation of the agricultural landscape, including the disappearance of pastures, drainage of meadows, consolidation and chemical treatment of crops are all factors that negatively affect this species. The situation is further worsened by the difficulties during migration. It is an extraordinary journey from Europe to wintering grounds in Africa. Not only is it harder to obtain food there, during the flights storks are being shot at by people, even with machine guns! There are many other dangers waiting for them on the way. The gravest, as shown by recent studies with the use of GPS-GSM transmitters, are electric power lines.

The stork is a species associated with humans for at least hundreds of years, through thick and thin. Its fate is largely in our hands.