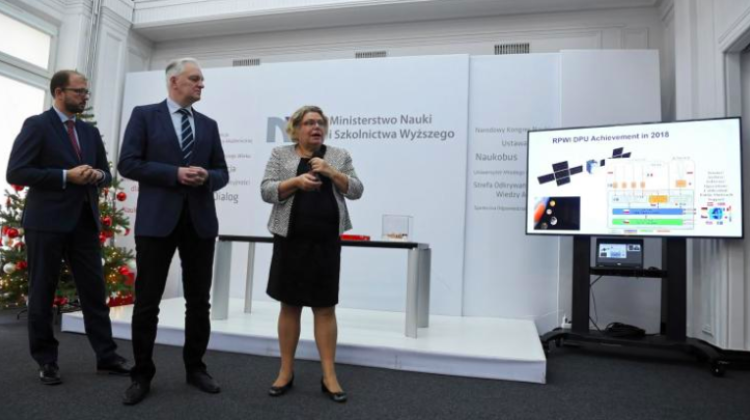 Polish scientists and engineers are working on devices that will study the moons of Jupiter during the JUICE mission of the European Space Agency (ESA). "This is proof that Polish science and economy can do more than just conquer European markets" - commented Deputy Prime Minister Jarosław Gowin.

During the press conference in Warsaw, scientists from the Space Research Centre of the Polish Academy of Sciences and representatives of Astronika presented their participation in the space mission JUICE prepared by the ESA.

In 2022, an automatic spacecraft called JUICE (Jupiter Icy Moons Explorer) will to begin its journey, during which it will explore Jupiter`s ice moons: Ganymede, Callisto, and Europa. In 2029, it will perform close flights near Jupiter`s Galilean moons. The observations will take 4 years. Then the spacecraft will enter the orbit of Jupiter`s largest moon - Ganymede; its mission will end with a fall to its surface.

Prof. Hanna Rothkaehl from the Space Research Centre PAS spoke about the Polish participation in the mission: "We are a member of the consortium of the RPWI instrument - radioplasma wave investigator. This device will be used to study electromagnetic field (...) and the properties of plasma. We will observe the environment around Jupiter - how it looks" - the researcher concluded. She added: "Our measurements will also allow to diagnose whether there is a huge ocean of water beneath the surface of Ganymede".

VP of Astronika Łukasz Kamiński, speaking about the JUICE mission, said: "Astronika sends seven astronomical mechanisms towards Jupiter". He mentioned that it would include four Langmuir probes for plasma testing and an antenna consisting of three components, for measuring radio waves.

"This is proof that Polish science and economy can do more than just conquer European markets, it can explore the entire universe" - commented Deputy Prime Minister, Minister of Science and Higher Education Jarosław Gowin.

Referring to the history of geographical discoveries, the Minister of Science said: "The great expeditions that allowed Europeans to explore new continents were sponsored by the monarchs of that time. Today, it is the role of democratic governments. And the purpose of the expeditions is no longer discovering new continents, but exploring the cosmos".

The researcher compared Jupiter to a miniature "solar system". "Studying Jupiter`s structure will help us understand how our Solar System is built: how it works, how it formed and how it evolved. (...) The mission will open a new window to understanding the universe" - she said.

"At the beginning of my career I thought that moons in the Solar System were not very interesting rock formations. But data from missions show that they are complex universes". She pointed out that Ganymede was similar in size to the Earth, and it had an atmosphere.

"There are ideas that one day a technical base or habitat will be established on Ganymede as the next step - after the Moon - in the exploration of the Solar System" - she reminded.