We know more about wolf territories in Western Poland 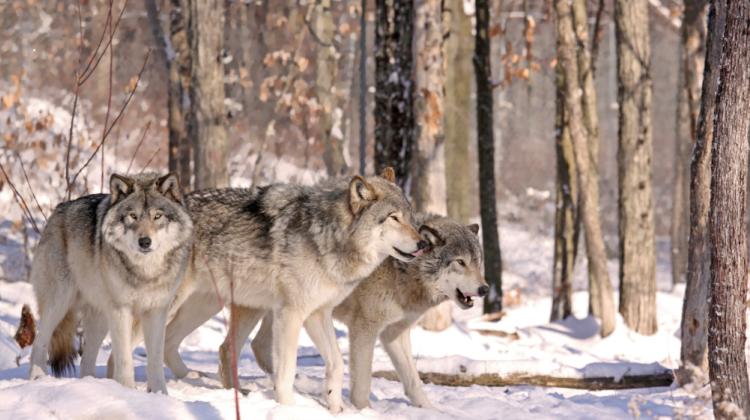 As a result of protection measures, wolves return to their former refuges in Western Poland. In order to correctly assess the size of the population of these predators it is necessary to know the areas of their territories and population densities. Research carried out in the Drawa Forest provides the first data on this subject.

The introduction of species protection, which has prevented wolves from being hunted throughout Poland for two decades, has allowed them to return to the forests of Western Poland. From there, they re-colonised a large part of Germany and even reached Belgium, Denmark and the Netherlands - says Dr. Robert Mysłajek, a biologist at the Institute of Genetics and Biotechnology of the University of Warsaw.

Wolf is a key species and has a huge impact on the entire ecosystem. It also provides ecosystem services that are valuable from an economic point of view, for example it controls the population of ungulates, including wild boars that carry the African swine fever (ASF). These predators are a priority species in accordance with the EU's Habitats Directive. Accurate data on their distribution and numbers are necessary to prepare reports for the European Commission, as well as conservation tasks for national parks and Natura 2000 sites.

Unfortunately, wolf monitoring is a very difficult task - these large predators use vast territories, and the dispersal ranges of young individuals often exceed several hundred kilometres. It is therefore impossible to obtain precise information about the population parameters in their entire range - Dr. Mysłajek emphasises in the materials sent to PAP.

This problem can be solved by two-tier monitoring. On a larger geographic scale, this can be achieved by collecting data on the occurrence of the species. Accurate information on the size of the territories and population density can be acquired in selected forest complexes.

The first data on this subject come from the research project carried out in the Drawa Forest by a team of specialists from the Institute of Genetics and Biotechnology of the Faculty of Biology, University of Warsaw, the West Pomeranian Nature Research Society and the Association for Nature "Wolf". Scientists and nature enthusiasts combined year-round tracking with telemetry, genetic analysis and recordings from photo-traps. Their results have been published in Mammalian Biology.

Three males wolves with GPS collars used huge areas, ranging from 322 to 421 km2. Two of the wolves, originating from a wolf family living in a military training ground near Drawsko Pomorskie, occupied a territory with an area of 430 km2. The average distance between places of rearing young by neighbouring wolf families was 15 km.

"We expected that considering the fact that the local wolves originated from Eastern Poland, their territories would be similar in size to those previously recorded in the Białowieża Forest" - comments the first author of the paper, Dr. Robert Mysłajek. "But they turned out to be larger" - he adds.

"In the last period of research, the population growth was only 7%" - says the president of the Association for Nature "Wolf" and co-author of the study, Dr. Sabina Nowak. - "The wolves clearly gradually saturate local habitats and their population stabilizes".

The density of the wolf population in the entire 2,500 km2 forest complex in the Drawska Forest was relatively low and amounted to 1.2 individuals per 100 km2 in 2016/2017. The densities calculated for the areas of the telemetry study groups were not much higher and amounted to 1.5 and 1.9 individuals per 100 km2. Depending on the year, the average wolf family size in winter was from 3.5 to 5.6 individuals, 8 wolves in the largest group. All studied wolf families reproduced. 4 or 5 puppies were observed during the summer in the studied groups.

Unfortunately, people significantly contribute to the deaths of wolves in the Drawa Forest. Three the animals that were found dead were killed in snares, two were hit by cars. A four months old puppy that was beaten to death with a stick. Fortunately, three more wolves (two males and a female) found alive in snares could be saved. One of them received a telemetry collar, which allowed to show that in the same year it brought up four beautiful puppies.

Research carried out in the Drawa Forest is the first such study of the entire Central European wolf population. Researchers hope that the results of the project will facilitate the evaluation of the wolf population. "Until now, we have witnessed a huge overestimation of the wolf population, including the absurd information on 500 wolves in forests administered by the Regional Directorate of State Forests in Szczecinek" - comments Dr. Mysłajek. "Our research will allow to make these estimates more reliable" - he adds.

Genetic studies performed in the project were financed with a Fuga 3 grant awarded by the National Science Centre.