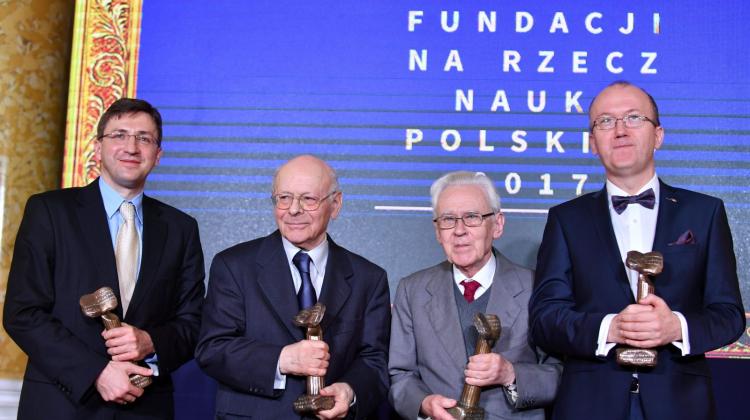 The winners of the Foundation for Polish Science Prizes represent the part of the world of science that is ready to take risks and try to meet the world level - Minister of Science Jarosław Gowin said on Wednesday during the award ceremony of the so-called " Polish Nobel Prizes".

Foundation for Polish Science Prize, sometimes called the "Polish Nobel Prize", was presented on Wednesday at the Royal Castle in Warsaw for the 26th time. It is awarded to Polish scientists for outstanding achievements and scientific discoveries that advance the boundaries of knowledge and open up new cognitive perspectives, make outstanding contribution to the progress of civilization and culture of our country and ensure Poland\'s significant position in undertaking the most ambitious challenges of the modern world.

This year\'s laureates were professors: Piotr Trzonkowski from the Medical University of Gdańsk, Daniel Gryko from the Institute of Organic Chemistry PAS in Warsaw, Andrzej Trautman from the University of Warsaw and Krzysztof Pomian from the CNRS in Paris and the Nicolaus Copernicus University in Toruń. Each of the winners will receive 200,000 zlotys.

"We are at a special moment as those who share responsibility for the future of Polish science" - emphasized Deputy Prime Minister, Minister of Science and Higher Education Jarosław Gowin. - "Firstly, we are almost on the eve of a government change. The new government will consider the increase of innovativeness of the Polish economy and the civilizational push of the Polish state its absolute priority for the next two years" - declared Minister of Science. He appealed to the academic community to send a "strong appeal" to the society for "appreciating the importance of science in every dimension, including the financial dimension".

The Minister of Science and Higher Education also pointed out that the involvement of scientists in public discussion about the role of science is also important due to the ongoing work on the new Law on Higher Education and Science, so-called Law 2.0. "We are standing at a crossroads" - he said. "We can follow the path which the Foundation for Polish Science has represented and implemented since the very beginning of its existence - that is, risk setting the bar as high as possible, try to reach the global level. There is also the second path, change little, leave things the way they are, consider security more important than taking risks".

Gowin noted that equally important for Polish science as the increase in financial outlays is "whether the academic community will be ready to take the risk of leaving a small, safe cove and venture into the wide waters of world science, international competition. I am convinced that here, at this ceremony the part of the world of science that is ready to take that risk is represented" - he added.

President of the Foundation for Polish Science Prof. Maciej Żylicz, in turn, spoke about the social responsibility of scientists: "The best ones also have a duty. The public would like us to know what is false and what is true. We are trying to do that and it is a great challenge. As representatives of science we must condemn falsehood and half-truths" - he stressed.

"But we should of course talk about things that we understand. Science is financed by society based on trust, which we as scientists sometimes unfortunately reduce. Firstly, we promise more in our grants than we can do. Secondly, we sometimes authoritatively speak on issues we are not experts in. I think that we should avoid these things precisely because of the social trust we enjoy" - he added.

Winner of the prize in the area of life and Earth sciences - Prof. Piotr Trzonkowski - was awarded for studies on regulatory T cells (TREG) and their pioneering use in cell therapy of human diseases. The Foundation recognised the use of these cells in the therapy of human diseases - type 1 diabetes, multiple sclerosis and graft versus host disease. Therapy is based on the patient\'s own cells: collected, multiplied and re-administered. TREG cells weaken the immune system that destroys the body\'s own organs, such as the pancreas in children with diabetes.

In the field of chemical sciences and materials, the winner was Prof. Daniel Gryko - for the development of an original method for synthesis and characterization of porphyrinoids. The professor designs and creates these compounds and studies their photophysical properties. He has developed an effective method of obtaining corroles, organic dyes that are not used for dyeing, but are fluorescent and can emit light. Previously, scientists were unable to synthesize corroles in large quantities. The discovery of the Polish scientists opened new perspectives for research and applications, also in medical diagnosis.

The winner of the FNP Prize in the mathematical, physical and engineering sciences was Prof. Andrzej Trautman for the theoretical demonstration of the reality of gravitational waves. According to some, without the work of Prof. Trautman - who convinced everyone that gravitational waves actually existed and their detection was possible - there would not be this year\'s Nobel prize in physics for scientists from the US and Germany, thanks to whom these waves were observed for the first time. Early work of Prof. The Trautman became the basis for many later studies on the theory of gravitational waves.

The FNP Prize in humanities and social sciences went to Prof. Krzysztof Pomian for pioneering research on the history of collecting and the influence of science and art on the development of European culture. The publications present Prof. Pomian\'s interdisciplinary research in the field of European history, culture, politics and philosophy.

Foundation for Polish Science Prize is awarded since 1992. The group of winners, including this year\'s laureates, already includes 95 people. (PAP)