Researchers from Poland and Canada have made a virtual reconstruction of a prehistoric rabbit’s brain from 34 million years ago, analysis of which will enable them to draw conclusions about the animal’s life.

In 1941, during paleontological excavations on the prairie in the US state of Nebraska, a researcher from the Walker Museum of the University of Chicago discovered a small fossil. It turned out to be the skull of a small mammal of the genus Megalagus, a relative of modern-day rabbits. This animal lived 34 million years ago and could weigh about 2 kilograms. Its brain was less than 4 cm long, scientists estimate.

Such old and well-preserved finds, especially mammalian skulls, are quite rare. Analyses of the bones tell a lot about the evolutionary development of the mammalian brain.

The skull was first subjected to x-ray microtomography from which the scientists were able to create a 3D image and virtually fill the cranium, thus creating a digital brain endocast. The surface of the reconstructed brain contains information not only about the size of its basic parts, but also about the course of cranial nerves and blood vessels on the surface of the brain. 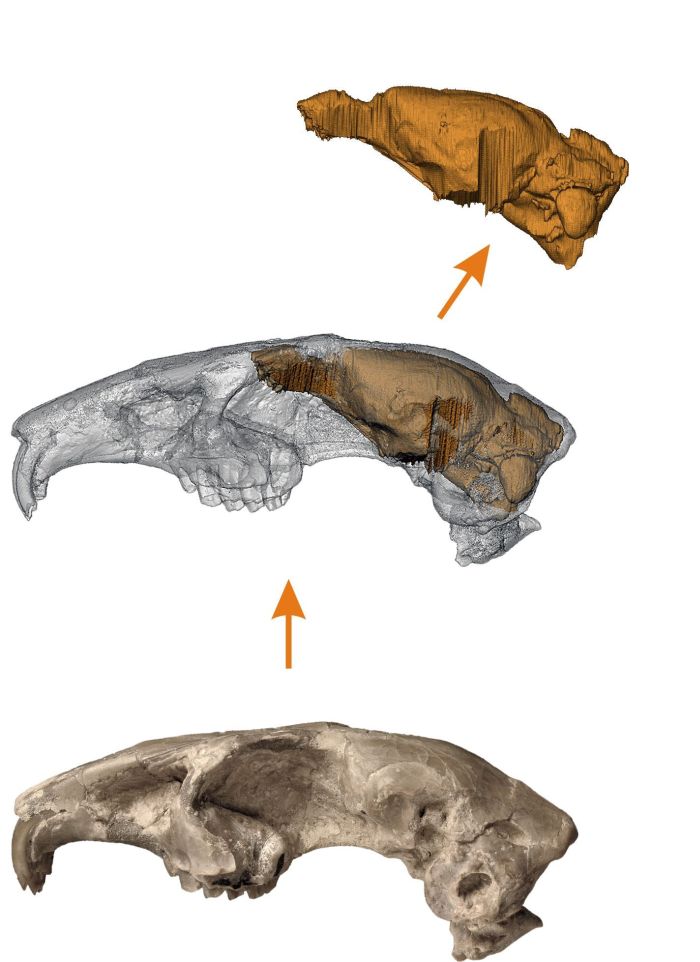 How is a virtual brain cast endomade? First, the skull of the fossil animal (bottom) is scanned in a microtomograph and its digital 3D image is created (centre); based on this data, CT data processing software is used to virtually reconstruct the cranial endocast (upper image). [Photo of the skull by Frank Ippolito. Illustrations from López-Torres et al. 2020]

The more we know about the structure of the prehistoric rabbit's brain, the more we can conclude about the life of the extinct animal. 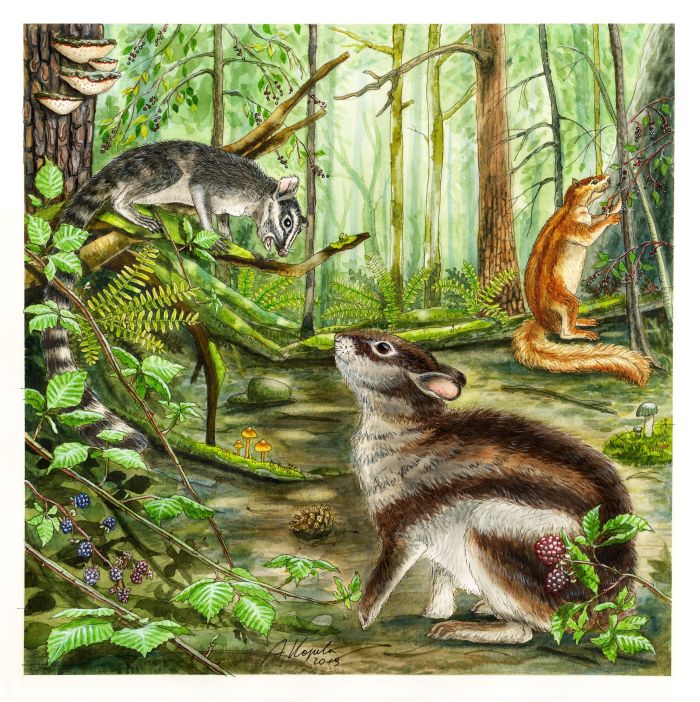 Reconstruction of the living environment of the Megalagus rabbit (middle bottom), depicting a late Eocene forest (ca. 36 million years ago) in North America and representatives of the three main groups of Euarchontoglires that hypothetically could meet for the last time during that period. Primitive primate from the group Plesiadapiformes (Ignacius, left, on a tree branch), lagomorph Megalagus and a rodent from the group Ischyromyidae (Ischyromys, right). Fig. Agnieszka Kapuścińska.

Head of the research team, Professor Łucja Fostowicz-Frelik from the Institute of Paleobiology of the Polish Academy of Sciences in Warsaw, said: “Our pioneering research on the prehistoric +rabbit+ brain is very important for the evolutionary biology of the entire Euarchontoglires group, including lagomorphs, rodents, squirrels, flying lemurs and primates, including humans.

“Lagomorphs are the primal line of Glires - the group of animals evolutionally connecting lagomorphs and rodents. They are therefore closer to primates than mice or squirrels. And the virtual brain endocast of the Megalagus genus confirms this."

She continued: “Modern rabbits have very large eyes and good eyesight because they live mainly in open areas. It was different in the case of their ancestors that lived more than 30 million years ago in forests and thickets in North America. Our research shows that the studied specimen had a large olfactory bulb compared to the whole brain. That is why smell had a more important role for this species than that for its modern-day relatives. Over time the eyesight of these animals improved, which was associated with the changing the environment, but the beginning of these changes is already visible in the genus Megalagus.”

The analyses also show that the American prehistoric rabbit had a slightly less developed hemispheres of the brain than its contemporary relatives.

“But it is hard to say whether this means that modern-day rabbits are +smarter+,” Fostowicz-Frelik added, noting that around 30 million years ago, a gradual cerebral hemispheres' increase was visible in all animal groups.

Comparison of the skull volume and body weight in selected Euarchontoglires groups. We estimate that the brains of the Megalagus rabbit (marked with an asterisk) was proportionally smaller in relation to the weight of the animal than in the case of modern lagomorphs, and closer in this respect to the early primates. [Illustrations from López-Torres et al. 2020]

The craniums of rabbit ancestors are very poorly preserved in fossil material because they are very delicate. Although many remains have been found in China, these are mainly teeth and jaws, so not much can be said about their brains.

But although brain tissue is not preserved in a fossil state, because it is too delicate and contains too much water, so-called natural brain casts are known to science: cemented sediment filling of the cranium. The "petrified brains" of dinosaurs are of similar origin, but even older. But such finds are rare.

The research was funded by the National Science Centre. The publication appeared in the Proceedings of the Royal Society B.

Professor Mary Silcox from the University of Toronto Scarborough and Dr. Serge López-Torres, a postdoctoral researcher at the Institute of Paleobiology of the Polish Academy of Sciences in Warsaw also took part in the research.