Understanding Copper: How Do Copper Ions Bind With Proteins? 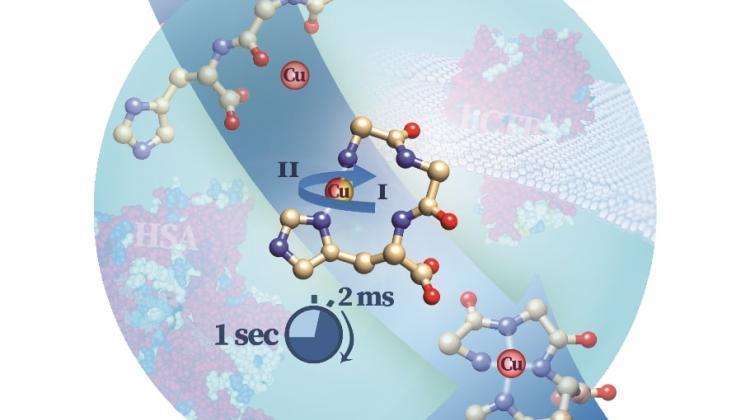 The course of the reaction between synthetic peptide and copper (Cu2+). During about 2 ms, an intermediate species observed by researchers is created and then spontaneously transforms into an unreactive end state. In the background are the structures of copper ion-carrying proteins that contain the studied structure: human serum albumin (HSA) and cellular receptor hCtr1. Source: Institute of Biochemistry and Biophysics PAS

Scientists have found that the mechanism by which copper ions bind to proteins and the time it takes are different than previously thought.

For several years, there has been a growing number of scientific reports on the link between copper content in various tissues of the human body and civilization diseases such as Alzheimer's disease or type 2 diabetes.

However, these clinical observations are still not explained at the molecular level, despite researchers around the world trying to fill the gap.

The teams investigated how quickly copper ion reacts with a synthetic peptide that binds this microelement in the same way as natural proteins, transporting it between blood and cells. Until now, it was thought that this was a very fast one-step process that takes place within microseconds. But the research shows that the process has three stages.

In the slowest of the stages, a previously unknown reactive intermediate species persists for nearly a second. It is the missing link in the process of copper transport to cells, for which only the unreactive final state was known. This discovery opens the way for detailed biological research, and in a longer perspective also to a more complete understanding of the causes of civilization diseases and the development of prevention strategies.

The research was carried out with chemical kinetics, electrochemistry and electron spectroscopy methods. During the experiments, scientists also used unique equipment capable of freezing the reaction state on a microsecond scale, available in the laboratory of Professor Peter-Leon Hagedoorn in Delft.

The research has been published in the journal Angewandte Chemie International Edition (https://doi.org/10.1002/anie.202004264).