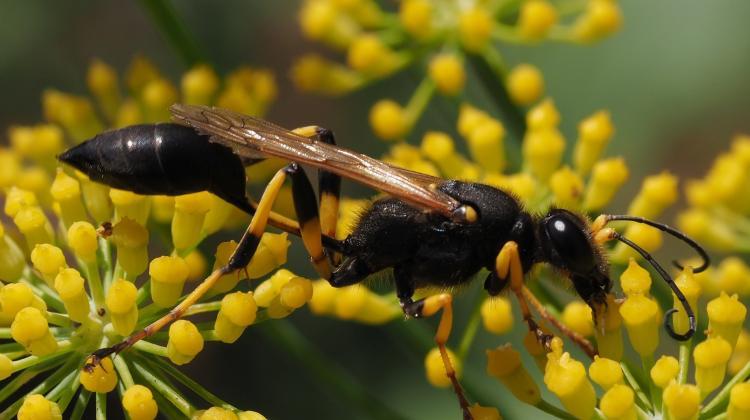 Global warming is seeing an increase in rare and exotic insects in Poland, says a leading biologist.

Insect specialist Dr. Marek Michalski from the University of Lodz says it is now more common to come across rare creatures such as a mantis or black bee, Mediterranean species such as the lime seed bug or mud dauber, and even non-European insects such as the box tree moth.

The researcher from the Department of Experimental Zoology and Evolutionary Biology of the University of Lodz said: “Due to the progressing global warming, the species previously encountered in southern Europe are migrating north, reaching Poland and even wintering and successfully breeding. The same phenomenon causes native species once found only locally, in particularly warm places, to quickly spread throughout the country.”

Human activity can also facilitate insect migration, with scientists sometimes deliberately introducing certain species to help combat plant pests or perform other useful tasks. But more often we take insect stowaways when transporting various goods. Some of them are able to settle in a new place, sometimes with disastrous results.

THE GREAT RETURN OF THE MANTIS AND THE BLACK BEE

Among Poland’s domestic insects, which are currently increasing in number, Michałski points to the European mantis Mantis religiosa. Of over 2,300 species of mantis, this is the only species found in Central Europe. Until recently considered rare and very local, in the past several years it has left its habitats in south-eastern Poland and reached Suwałki and Olsztyn. Individual insects were also seen in Łódź, and in the nearby Przedbórz Landscape Park sites with hundreds of cocoons with eggs were found. Adult mantises usually appear in the second half of summer. They are large, avid fliers, even at night, and are often observed on balconies and street lamps.

The second native insect whose expansion attracts considerable interest is the violet carpenter bee Xylocopa violacea, commonly called the 'black bee'. This species was observed in individual sites at the turn of the 20th century; after World War II it was considered extinct in Poland. Meanwhile, since 2000, there have been individual reports of violet carpenter bees in southern Poland. Later there were further reports from almost the entire country, except for the north-eastern regions. This insect builds nests for its larvae in dry wood and often feeds on the nectar of garden flowers, such as sweet pea, globe thistle and stonecrop. Due to the very large size and characteristic coloration it is very easy to spot.

A thermophilic, Mediterranean insect that has significantly increased its range in Europe over the past few years is the lime seed bug Oxycarenus lavaterae. It belongs to the order of true bugs. It resembles the common firebug, but it is smaller and not so brightly coloured. It is easy to notice, because in the autumn and winter it forms huge clusters of lime trees, especially near streets, even in city centres. This insect dies at temperatures below -15 degrees Celsius, but mild winter allows entire colonies to survive. Dr. Michalski points out that so far the lime seed bug has not been found to cause significant damage to trees.

Mud dauber Sceliphron distillatorium from the order hymenoptera also comes from the south of Europe. It is a large, vividly coloured insect. Females build large clay nests on the walls of buildings, sometimes inside apartments, on furniture, curtains, etc. They bring spiders, which are food for larvae. Mud daubers are basically harmless, but they can weakly sting if threatened. They are sometimes confused with wasps and hornets and often killed.

Invasions of alien (non-European) insect species include mass appearances of a small horse-chestnut leaf miner moth Cameraria ohridella. Its cousins that feed on, among others on lime trees, robinia, plane trees and scarlet firethorn also appeared in Poland. Among invasive insects that are currently in expansion are the box tree moth Cydalima perspectalis. It was brought to Europe from East Asia with seedlings of box tree, on which its caterpillars feed.

Michalski said: “This moth has an exceptionally short development time, 4 to 5 generations can develop in one year. An additional factor facilitating the expansion of box tree moth in Europe is the total lack of natural enemies. Even insectivorous birds are not interested in its caterpillars.”

Another easy-to-spot invasive insect that has conquered Poland in recent years is the western conifer seed bug Leptoglossus occidentalis. This large true bug feeds on pine trees, including trees planted in parks and gardens. In the fall, adult insects look for places to winter also in the vicinity of human settlements and try to hide in apartments.

The researchers treats unconfirmed reports about spotting the so-called tiger mosquito or Asian hornet in Poland with scepticism. He emphasizes that real expansions and invasions of other insect species are happening before our eyes. In his opinion, they are facilitated by increasingly mild winters and warm summers.