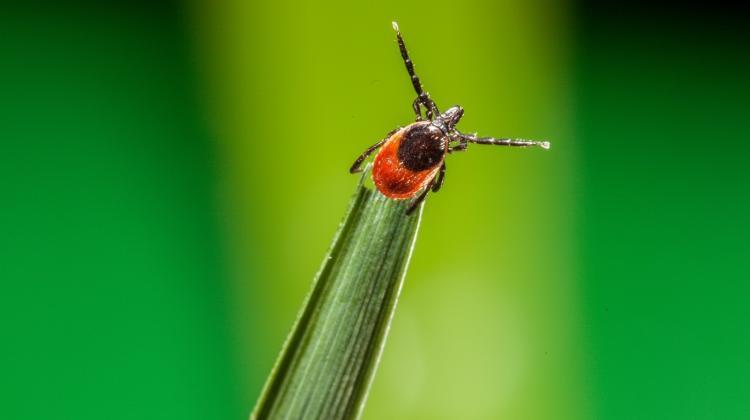 If you want to avoid catching a tick, better leave your phone at home when going for a picnic in the park or a run in the woods. The latest Polish-Slovak study shows that ticks, especially carriers of dangerous pathogens, are attracted by electromagnetic radiation at a frequency of 900 MHz.

The expanding range of occurrence of many tick species has been observed for decades in Europe and beyond. They are even found in large cities, where they are waiting in green areas for people and their pets.

Climate change and landscape transformation are primarily responsible for increasing tick numbers. However, according to the Poznań University of Life Sciences, the latest research by the Polish-Slovak team shows that electromagnetic radiation (EMF), more and more common in the environment, the sources of which include radio and television stations, mobile telephony and numerous mobile devices, may also be responsible for expanding the range of ticks.

Many people never part with their smartphones and other electronic devices. “But hardly anyone is aware that the EMF they emit is not neutral for the body,” researchers told PAP.

They added that scientists have so far discovered the negative effects of electromagnetic radiation on dozens of species of bacteria, animals and plants. EMF affects cells as well as entire animal and human organisms, causing activation of oxidative stress, change in cellular metabolism, disruption of some enzymes, change in immune responses, affecting DNA expression and disrupting the functions of the nervous, cardiovascular and reproductive systems. The term +electromagnetic pollution+ was coined to emphasize the ubiquity of this factor in the environment and its impact on organisms.

Professor Piotr Tryjanowski from the Poznań University of Life Sciences said: “The studied issue is extremely interdisciplinary, hence the need for cooperation of representatives of many disciplines: veterinarians, parasitologists, electrical engineers and finally biologists specialising in advanced statistics.”

The authors of the study checked how EMF affected the behaviour of the castor bean tick Ixodes ricinus, known primarily for the transmission of Lyme disease (caused by bacteria of the genus Borrelia) as well as rickettsiosis (caused by bacteria of the genus Rickettsia) and tick-borne encephalitis (caused by viruses). The analysis showed that ticks were attracted by 900 MHz radiation. This radiation length is used in most mobile devices, including smartphones.

Even more surprisingly, ticks infected with bacteria of the Borrelia and Rickettsia species are more likely to move towards EMF.

Why do ticks react to electromagnetic radiation? It is probably related to their magnetic sense, the sixth sense common in the animal world, which has evolved in response to the Earth's geomagnetic field. Artificial electromagnetic radiation can disrupt this sense and increase tick mobility. In addition, it is suspected that natural electromagnetic radiation, small amounts of which are generated produced by every living organism, helps ticks detect hosts, scientists suggest. It is not known, however, to what extent this could be a useful function, because ticks rely mainly on the olfactory information when selecting the host, also detecting moisture, heat and carbon dioxide of the incoming potential host.

The authors of the study admit that the next puzzle is the impact of bacteria carried by ticks on the reaction to electromagnetic radiation. “At first it may seem absurd, but it is worth noting that ticks have been co-evolving with their pathogens for thousands of years. Many tick pathogens can manipulate their hosts, changing their metabolism, fertility, and even affect environmental preferences. So apparently some of them affect tick response to electromagnetic stimuli, making them move towards those stimuli even more willingly than usual,” the scientists said.

They added: "This is certainly bad news for people who do not part with their phones even in nature. But good news for those who say that for a complete rest it is best to leave the phone at home or in the car, and enjoy the sound of trees and singing birds in the forest instead of the sound of incoming messages.”