Science in the Fight Against the Pandemic 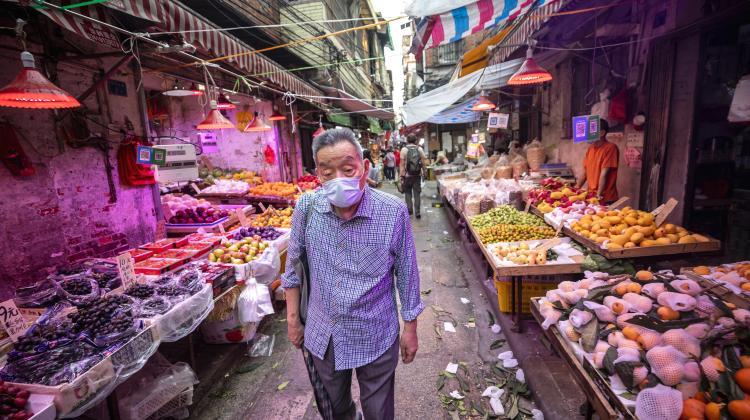 Biodiversity is a natural 'vaccine' that protects us against pathogens. Preserving biodiversity and reducing human contact with animals can limit the spread of pathogens. Professor Piotr Skubała from the University of Silesia in Katowice writes about the role of science in the fight against the pandemic.

Alive or not, or the problem with viruses

Pathogens everyone is talking about today are viruses, and especially one: SARS-CoV-2 coronavirus, the cause of the pandemic like nothing that any of us has experienced so far, the extent of which is so shocking. Viruses are defined as small infectious agents that infect all life forms, unable to replicate outside the host cell. They do not have a cellular structure, they do not contain organelles, so they cannot be included in the world of organisms. They are extremely simple, they are essentially genetic material in a protein capsule. But since they not only possess genetic material, but also reproduce and evolve through natural selection, some biologists consider them to be real life forms. To live, they require host cells, which can be animal, plant, fungus, bacterial or archaebacterial cells. Because they possess some, but not all, qualities of other life forms, they are sometimes referred to as 'organisms at the edge of life'.

Viruses are intracellular absolute parasites, they cause a number of diseases in many organisms, including man. They were never liked, and now in the time of the coronavirus pandemic it will probably be firmly established in people's minds. That's how we learn to look at viruses at school. The same applies to bacteria, parasites, fungi and many other organisms. Meanwhile, at the ecological level, viruses perform a crucial task, regulating the population of host species and ensuring their balance in ecosystems.

In the light of science, viruses are a kind of 'genetic mail' that carries DNA fragments between different individuals and even species. They can carry both unfavourable genes (e.g. related to the formation of tumours) and beneficial ones. Our evolution is also closely linked to viruses. There are at least 35 'valuable' viral genes in human DNA. According to Professor Luis Villarreal (former director at the Center for Virus Research, University of California, Irvine), 'viruses represent a major creative force in the evolution of the host' (Villarreal 2004).

Science in the fight against viruses

The world is experiencing a tragedy today, thousands are dying as a result of coronavirus infection, decision makers are asking scientists to look for a way out of this situation, to return to normalcy. Scientists have a responsibility to deal with the Covid-19 disease. Many scientists, including doctors, biotechnologists and virologists, put all their intellect and time into understanding the mechanism of SARS-CoV-2 coronavirus. This will help to develop an effective vaccine faster.

In the time of the pandemic, there is also room for representatives of many other scientific disciplines, including psychologists and psychotherapists. We don't know how to deal with this new, uncomfortable situation. We are looking for help, remedies during isolation. Mathematicians are being tasked with developing reliable models of the course of the epidemic. The European Commission is devoting considerable resources to transnational brainstorming on technological, social and political solutions to the pandemic crisis. These are all correct measures, we must look for a quick way out of this confusing situation. But should that be the role of science? Or at least only that?

Could we have predicted and counteracted the coronavirus epidemic? Did science foresee its arrival? What are the reasons for this occurrence? Many emerging diseases, such as Ebola, AIDS, SARS, bird flu, swine flu, and today the new coronavirus (SARS-CoV-2), are not accidental catastrophic events but the consequences of our violent interference with natural ecosystems. According to Gordon Wolman, a professor of geography at Johns Hopkins University, on a global scale, the combined effects of human activities are often greater than the forces of nature itself.

Wolman estimates that the total amount of soil displaced annually in agriculture alone is ten times greater than sludge carried by all rivers in the world. We have already accumulated six times more water in artificial reservoirs than it flows in rivers. We emit into the air many times more lead, cadmium, copper, arsenic, sulphur and nitrogen than nature did before us in the natural cycles of these elements (Wolman 2002). The increase in our consumption of Earth's riches is really "impressive": since 1950 we have been using 5 times more fossil fuels, we have quadrupled sea fishing, since 1960 we have used twice as much fresh water, in the last 25 years we have been using 40% more wood (UNDP 1998).

Many pandemics of recent decades started in Asian or African metropolitan markets, where illegal or uncontrolled trade in live wild animals such as monkeys, bats, snakes, pangolins and many other reptiles, mammals and birds takes place. These activities open up dangerous possibilities of contact between people and the diseases carried by these organisms, creating conditions for the development of old and new zoonoses, infectious diseases that can be transmitted from animals to humans. The penetration of pathogens (such as viruses) from wildlife into humans is also facilitated by the progressive destruction and modification of ecosystems due to the penetration of humans into the last unpolluted areas of the planet. Viral zoonoses today represent a significant percentage of all newly identified as well as existing infectious diseases.

Studies show that biodiversity is a kind of natural vaccine that protects us against pathogens. Maintaining this diversity while limiting our contact with (wild - PAP) animals can limit the spread of pathogens. The loss of species from the environment can have dangerous consequences for the spread and occurrence of infections, including those that affect people (Gilbert 2010). This interaction is observed in different ecosystems, it concerns various pathogens and hosts. Researchers have noticed a pattern that shows that biodiversity loss increases disease transmission. Analysis of the occurrence of 12 diseases, including West Nile fever and Lyme disease in ecosystems around the world showed that in each case, diseases became more common as biodiversity decreased (Keesing et al. 2010).

The increasing human interference in the functioning of ecosystems and the world of wild animals, combined with the impact of global climate change, leads to the weakening of natural ecosystems and facilitates the spread of pathogens by increasing human exposure to these threats. We know how to react in order to prevent future pandemics. We need to start protecting nature, rebuild damaged ecosystems, stop exploiting wild animals, end industrial animal husbandry.

What lesson will we learn from the SARS-CoV-2 coronavirus pandemic? Will the voice of science be considered by decision makers before another tragedy occurs? Will politicians surround themselves with scientists and listen to their opinions? Will this experience lead us to deeper reflection on the relationship between people and nature? Carl Sagan (American astronomer and science promoter) wrote about these relationships: 'Like it or not, we humans are bound up with our fellows, and with the other plants and animals all over the world. Our lives are intertwined.. (...)They've all been working together - plants, animals, microbes - for a very long time. (...)The inclination to cooperate has been painfully extracted through the evolutionary process. Those organisms that did not cooperate, that did not work with one another, died. Cooperation is encoded in the survivors' genes. It's their nature to cooperate. It's a key to their survival' (Sagan 2001).