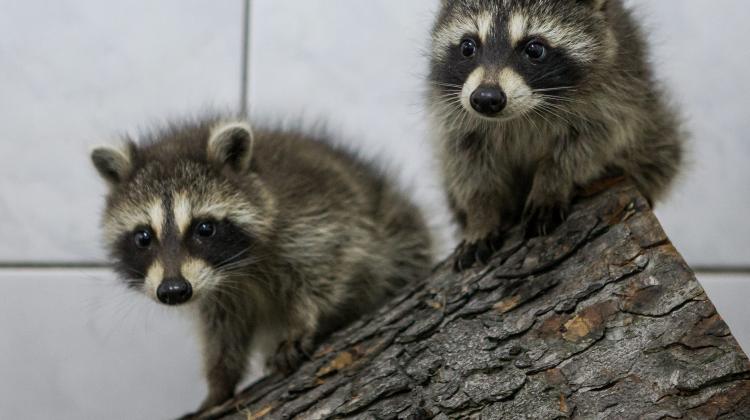 What was supposed to be a 'typical' genetic study of the raccoon population in Poland turned out to be... a new idea for environmental analysis, useful in biodiversity research and tracking species invasion.

Raccoons are considered foreign species in Poland and Europe. It has long been known that their spread (like the spread of many other invasive alien species) has a direct negative impact on native ecosystems. 'Stowaways', previously unknown parasites that accompany new species also spread during the invasion. In the case of raccoons, they include nematodes such as raccoon roundworms.

Researchers from the Institute of Nature Conservation of the Polish Academy of Sciences in Kraków now point out that invasive alien species can also act as a means of the spread of other species, including native microorganisms. They have noticed this while studying the genetic structure of the raccoon population in Poland.

As part of this work, scientists analyse the genetic material of individuals from different parts of the country (in this case, samples were taken from the body surface of raccoons shot by hunters in the Warta Estuary National Park). They compile the results to obtain population information on a larger scale.

They found that the samples were contaminated with foreign DNA.

At first, contamination seemed to be an obstacle, but it also appeared intriguing. The culprits turned out to be microscopic organisms, including two practically unknown to science.

Lead author of the study, Professor Aleksandra Biedrzycka from the Institute of Nature Conservation PAS in Kraków said: “Among the identified species were Parachloroidium lobatum and Jaagichlorella roystonensis. They are a recently defined and very little known about species of green algae (Chlorophyta).”

She added: “Our research confirms that mammals can act as random but effective vectors of aquatic and terrestrial microorganisms. Secondly, the eDNA method we described has not been used in environmental research until now, although it allows for easy acquisition of this the type of sample, providing insight into local biodiversity and the distribution of organisms that are difficult to find and identify by traditional methods.”

Co-author Dr. Wojciech Solarz told PAP: “During the exploration of terrain and water bodies, various small organisms attach to their fur and raccoons carry them on. This has significant consequences due to their local mobility and large-scale invasion. Because the range of occurrence of raccoons in Europe is systematically increasing, this species can affect the biogeography of microorganisms not only on a local but even continental scale.”

Although the research was carried out on a small scale, the results encourage further, more extensive analyses.

Dr Solarz said: “Environmental DNA is usually obtained from water. Based on such samples, a list of species found in a given water body can be determined in a lab. This applies to a range of organisms, from bacteria to vertebrates, such as fish and amphibians.

“We treated this raccoon - its fur - as the same medium as soil, air or water. Our result means certain consequences for environmental research and the fact that a new type of sample can be used in it. It seems that no one has ever treated vertebrate body - e.g. mammal fur - as a source of environmental DNA in which various organisms, species unrelated to this animal, can be detected.”

He added: “Our research shows that old collections in natural science museums can be a new source of environmental DNA. Well-protected samples can be stored for a very long time.”

The conclusions of the raccoon study can be useful in the context of invasion monitoring, especially in the aquatic environment, where it is relatively difficult to detect the emergence of new alien species.

The ability to quickly detect these organisms in the environment improves the chances of controlling them before they seriously affect us or the entire environment.

The full article text is available on THIS page.