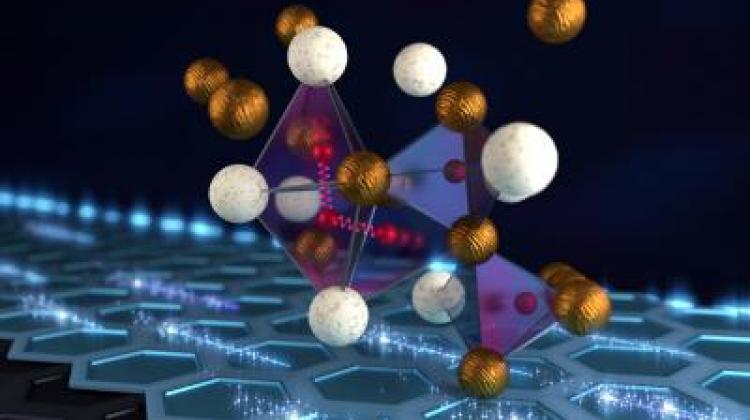 An international team of scientists has found that the hydrogen atoms in metal hydrides are packed more densely than previously thought, which could lead to superconductivity at temperatures and pressures close to those in room conditions, physicists from Kraków say.

According to the Institute of Nuclear Physics of the Polish Academy of Sciences: “This kind of superconducting material, used to transfer electricity without losses caused by resistance, could revolutionize energy efficiency in a wide range of applications.”

At the Oak Ridge National Laboratory (ORNL) in the US, scientists conducted experiments of neutron scattering on zirconium-vanadium hydride at atmospheric pressure ranging from -268 degrees Celsius (5 K) to -23 degrees Celsius (250 K), which is significantly above the temperature in which superconductivity is expected to take place. The measurement results were inconsistent with existing models. 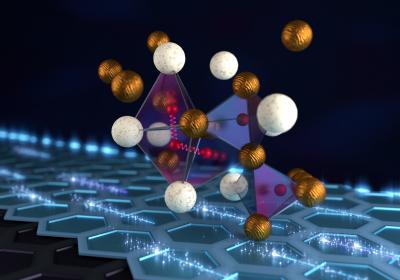 Illustration of a zirconium vanadium hydride atomic structure at near ambient conditions as determined using neutron vibrational spectroscopy and the Titan supercomputer at Oak Ridge National Laboratory in the US. The lattice is composed of vanadium atoms (in gold) and zirconium atoms (in white) enclosing hydrogen atoms (in red). Three hydrogen atoms are shown interacting at surprisingly small hydrogen-hydrogen atomic distances, as short as 1.6 angstroms. These smaller spacings between the atoms might allow packing significantly more hydrogen into the material to a point where it begins to superconduct. (Source: ORNL / Jill Hemman)

Professor Zbigniew Łodziana from the Institute of Nuclear Physics PAS, one of the members of the international research team, proposed a new model of this hydride. This model, subjected to calculations on one of the most powerful supercomputers in the world, made it possible to easily explain experimental observations. It turned out that the distances between the hydrogen atoms in the tested material are 1.6 angstroms, while the well-established predictions for these compounds determined this distance at least 2.1 angstroms.

The discoveries by the teams from the Swiss Federal Laboratories for Materials Science and Technology EMPA, the University of Zurich, ORNL and the University of Illinois at Chicago and the Institute of Nuclear Physics of the Polish Academy of Sciences in Kraków have been published in the prestigious journal PNAS. https://www.pnas.org/content/117/8/4021/tab-article-info

The resulting atomic structure has extremely promising properties, because the hydrogen in metals affects their electronic properties. Other materials with similar packing of hydrogen atoms become superconductive, but only at very high pressures.

Recently discovered lanthanum decahydrate reaches superconductivity at a temperature of about -13 degrees Celsius, but at a pressure of 150,000 MPa, nearly one and a half million times higher than atmospheric pressure. Such high pressure is needed to bring hydrogen atoms closer together than 2 angstroms. 'We showed that hydrogen can be packed so densely also at atmospheric pressure', says Professor Zbigniew Łodziana.

For over 40 years scientists believed that this was not possible, which is why materials were tested under high pressure. Finding a substance that is a superconductor at room temperature and atmospheric pressure will most likely allow engineers to use it to design commonly used electrical systems and devices, such as MRIs.

“We hope that a cheap and stable alloy such as zirconium vanadium hydride can be easily modified to obtain a superconducting material,” said Professor Zbigniew Łodziana from the Institute of Nuclear Physics PAS.

In future experiments, scientists plan to enrich zirconium vanadium hydride with more hydrogen at various pressures to assess the potential superconductivity of the tested material.

Are we on the verge of a technological revolution consisting of finding a material with superconducting properties at room temperature? “I don't know that, but we have certainly managed to take a significant step in this direction,” says Łodziana.

The research was partly financed as part of the National Centre for Research and Development project.