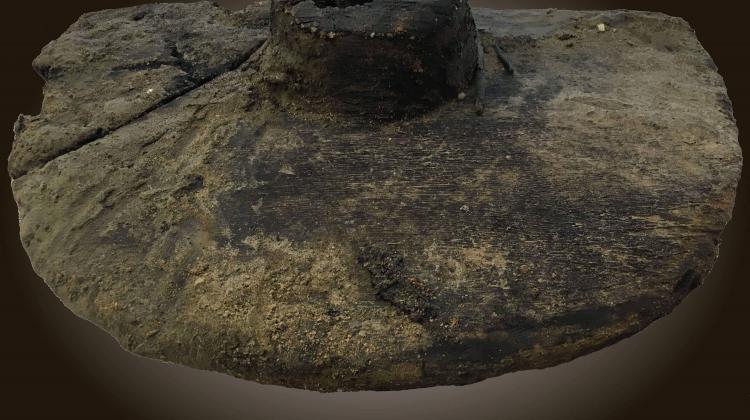 The remains of a rare wheel dating back to the Bronze or Iron Age is is to be examined by archaeologists and researchers from the Museum in Wodzisław Śląski.

The wheel which is almost intact with a diameter of 62cm and a preserved hub, was found buried 4-5 metres under gravel on a construction site at a flood protection reservoir on the Odra River in Nieboczów, in the Wodzisław poviat.

Adrian Podgórski from the Wodzisław museum and the Upper Silesian Branch of the Scientific Association of Polish Archaeologists told PAP: "Wooden items from past eras are relatively rarely preserved.

“Therefore, finding a larger part of a wheel with the hub (the part in contact with the roller or axle - PAP) is something special.

“We know the discoveries of rim fragments, spokes and wooden axles from the Middle Ages in Poland.

“In this case we are dealing with an entire wheel. Its simple construction may suggest that it is an older object.”

He added: ”Changes in the natural environment helped us a bit, as groundwater levels decreased.

“As a result, the wheel was exposed. Thanks to the vigilance of employees and the awareness of the gravel pit owner, Mr. Jan Matuszek, our museum was informed about the possible rank of the discovery.”

For now, archaeologists have been unable to determine the age and origin of the find. Its shape and construction are quite standard (it is a full wheel, not spoked), and no other artefacts were found around it.

Podgórski said: "The wheel has a diameter of about 62 cm and a preserved hub. It was not damaged during extraction, as evidenced by a straight, even edge below the hub.

“The wheel probably consisted of two parts, but we do not know how they were connected; we will find out after conservator's research.

"But it is possible that the river brought the wheel here from another place.”

The use of wheeled vehicles date back to between 3500 and 3300 BC, as evidenced by various finds from several regions of Europe and Asia.

"Our wheel is probably not that old, though we cannot rule it out,” Podgórski said.

“It is also difficult to determine when such items become obsolete, but it seems that their decline in our lands took place in the late Middle Ages, when the profession of wheelwright developed and spoked wheels became popular.”

He added that in the area where the wheel was found, the first agricultural communities (small, individual settlements) appeared in the fourth millennium BC. "It is therefore difficult to determine at this time whether it is an artefact from the Bronze or Iron Age, or from the Middle Ages," he said.

Research on the preserved object is expected to provide answers to these questions. It will be carried out by archaeologists from the Museum in Wodzisław Śląski and the team of Prof. Małgorzata Grupa from the Nicolaus Copernicus University in Toruń. It will include radiocarbon dating (although it may be burdened with the so-called reservoir effect, i.e. the date obtained may be earlier than the actual one) and dendrological analysis (determination of the tree species used to make the wheel).

Archaeologists are also considering conducting a dendrochronological analysis (determining the time of tree felling) and isotope research; however, it will depend on consultations with experts and available funds.

Podgórski said: ”The wheel has now been protected against moisture loss. At first glance, it seems to be well preserved, but additional research will determine its actual condition.

“It is important for us to not only extract as much information as possible from the wheel, but also to preserve the object and in the future present it at an exhibition.”