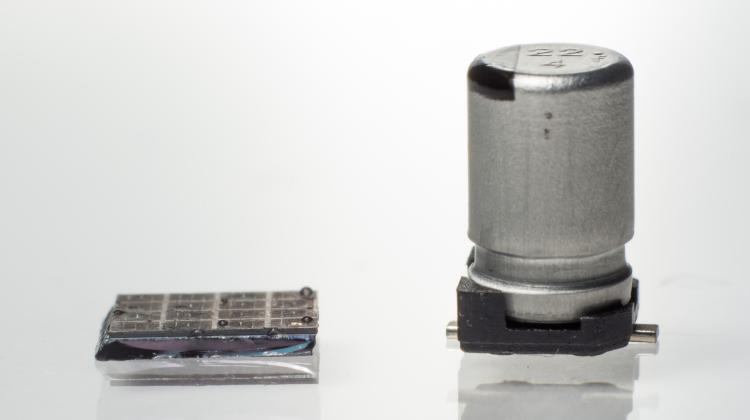 Dr. Karolina Laszczyk from Wroclaw University of Technology works on the miniaturization of energy storage devices - so-called supercapacitors. This year the researcher won the competition "Innovation is a Woman".

This year\'s main prize was awarded to Dr. Karolina Laszczyk, a researcher from the Interdepartmental Department of Microengineering and Photovoltaics of the Wroclaw University of Technology.

"I work on miniaturization of devices, including chip supercapacitors, also called electrochemical capacitors" - Dr. Laszczyk said in an inteview with PAP.

The electrodes in the developed by Dr. Laszczyk are thousands of times smaller than a commercial capacitor, and have the same performance, i.e. capacity, voltage, energy and power. The researcher used carbon nanotubes in the production of new microsupercapacitors. Unlike activated carbon used in commercial supercapacitors, they can accumulate more electrical charges in the same volume and conduct electricity better. This allows to obtain similar and even higher energy from a smaller volume.

Dr. Laszczyk explained that advances in miniaturization of supercapacitors could be useful in the development of smaller electronic devices or integrated circuits. When the dimensions of the electrodes of such a supercapacitor (as a result - a microsupercapacitor) decrease, the exchange of ions between the cathode and the anode is much faster. This allows to reduce the charging time to milliseconds or even microseconds.

The researcher told PAP that what we needed now for electronic power supply systems were aluminium electrolytic capacitors. They usually have a cylindrical shape. "They are fast, they provide a lot of power, but they are relatively large and heavy" - she said.

There is no limit to the number of connected components. "In a single process, we were able to produce about 4.7 thousand microsupercapacitors packed on a 10 cm in diameter surface" - said Dr. Laszczyk. According to the researcher, any desired parameters can be achieved.

In work on new microsupercapacitors, the researcher from Wroclaw University of Technology used a technology similar to that used to make miniature silicon devices.

Dr. Laszczyk hopes that thanks to its research it will be possible to produce smaller supercapacitors using less materials. And the devices will be easier to adapt for mobile devices.

The prize in the current edition of the competition "Innovation is a Woman" is the presentation of the winning project at the International Trade Fair Ideas - Inventions - New Products - iENA 2017 in Nuremberg.