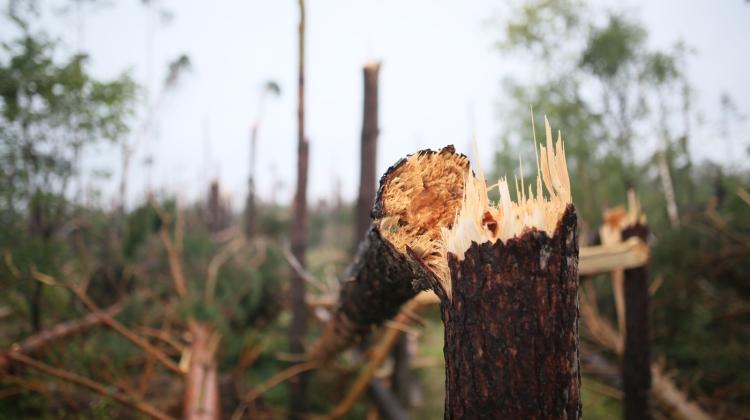 Until the recent storms, the hurricane that passed over the Pisz Forest in 2002 was considered the greatest natural disaster of this kind in the history of Polish forestry. Removal of its effects and redevelopment of damaged forest areas took eight years.

According to preliminary estimates, the storms that passed over Poland on the night of 11th August damaged around 45,000 Forest of forest. On Wednesday, the Director General of the State Forests Konrad Tomaszewski informed that approximately 8.2 million cubic meters of wood fell. According to Tomaszewski, it was the greatest disaster caused by a hurricane in the history of Polish forestry.

Previously, the biggest disaster of this type was the hurricane that passed over the Pisz Forest in Mazury on July 4, 2002. It caused damage to the stand in an area of 45.4 thousand Forest. The total volume of the damaged wood, estimated to be recovered as a result of the removal of the effects of that hurricane, was 4.1 million cubic meters, including 2.5 million cubic meters from fallen and broken trees.

15 years ago, the winds reaching 170 km per hour injured 13 people. Roads and railways were blocked by more than a thousand fallen trees. In the communes of Pisz and Orzysz, where the storm was strongest, damage to 700 buildings was reported.

The greatest devastation was recorded in the forests of six forest districts. The damage was concentrated in the 130 km long and 10-12 km wide belt. The most severely affected were the Pisz Forest and the Pisz Forest District, where 12 thousand hectares of tree stands were damaged to varying degrees, 4 thousand hectares of which were completely destroyed huge areas of forest. The hurricane also caused losses in the Kurpie Forest, Borecka and Romincka Forests.

Deputy District Forester of Pisz Elżbieta Maszkiewicz told PAP that the removal of the effects of that storm and redevelopment of destroyed forest areas took eight years. At that time, the foresters managed to restore the forest in almost the entire area affected by the disaster. The restoration work was completed in 2009.

Forest Districts affected by the hurricane 15 years ago spent PLN 120 million from their own resources in 2002-2004 on remedying the effects of the storm, timber recovery, cleaning the surface and road repairs. Where the damage was most severe, the resources of other forest districts and forest services were used.

During the first year, on average 1.2 thousand people per month worked on removing the effects of the storm in the Pisz Forest District alone, as well as about 250 skidders, six harvesters brought from all over Poland and other specialized equipment. Only in that forest district, in 2008, the year when in the forest restoration culminated, nearly 4.8 million young trees were planted.

Due to the 2002 hurricane, the average age of stands in the Pisz Forest District has decreased by about 20 years and is now 62 years. According to foresters, the first so-called care cuts of pine and birch in the areas affected by the hurricane can be carried out in about 10 years, when the trees reach the age of 25 years. Such timber is used in paper mills and chipboard production. The qualifying age of the stand for felling, when the most valuable sawmill wood is harvested, in the case of pines is about 120 years.

According to Maszkiewicz, thanks to the restoration of forests in the area affected by hurricane, foresters managed to enrich the species composition of stands in the whole complex of the Pisz Forest. The share of pine in the forest district fell to 75 percent, by nearly 8 percent, in favour of deciduous species.

The Deputy District Forester said in an interview with PAP that the experience gained during the removal of the effects of the hurricane of 2002 may be used after the recent storms.

"Over the past 15 years, as part of training, many foresters from all over Poland visited us to see what we had managed to do and what mistakes had been made. I think that among them were also representatives of the forest districts that suffered this year" - she said.

After the hurricane of 2002, by the decision of the Minister of the Environment a unique protective forest "Szast" was created in the Pisz Forest District. In the area of 475 ha, foresters left all the broken and fallen trees, and the restoration of the forest in that area occurs exclusively in a natural way.

This area also serves as a testing ground for conducting observations and scientific analyses. According to the Masurian foresters, lightweight seed species were restored naturally, mainly birch, to a lesser extent pine, and the quality and density of trees are much lower than in a commercial, artificially planted forest.