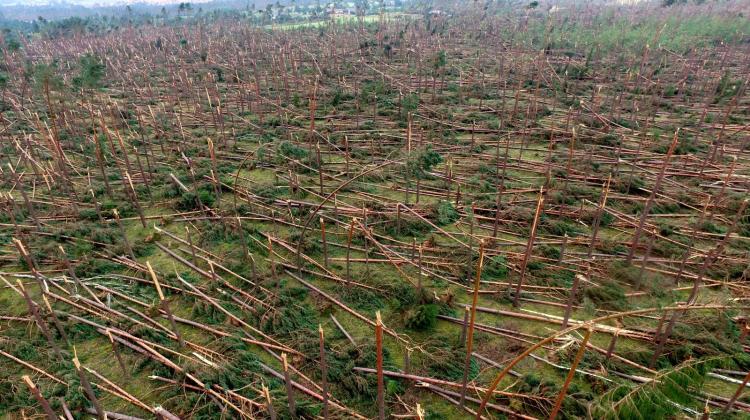 View of the destroyed forest in the area of Rytel. Photo: PAP/ Leszek Szymański 17.08.2017

Catastrophic storms - like those that rolled through Poland on Friday night - will be more frequent. Their intensity and regularity is influenced by the progressive climate warming, to which man contributes - told PAP atmospheric physicist Prof. Szymon Malinowski.

The storm that rolled through Poland on Friday night (11-12 August) is, according to the scientist, an event associated with the progressive climate warming, which in turn is caused by human activity: greenhouse gas emissions. "The progressive climate warming now makes the event of this type more and more likely" - noted Prof. Szymon Malinowski from the Institute of Geophysics of the University of Warsaw.

According to the researcher, if people do not reduce greenhouse gas emissions on a global scale, storms similar to the one that rolled through Poland can happen in Europe every few years. The warmer climate is conducive to extreme meteorological events, so we can expect that over time both the frequency and intensity of such phenomena will increase.

The researcher notes that the recent storm was not an isolated event in our country in recent years. He recalled floods and tornadoes.

"Climate warming means that we are less likely to have with moderate weather. We can now confirm that droughts and floods occur more frequently than a few decades ago" - noted Prof. Malinowski.

With global climate change, the season in which similar storms in Poland can occur becomes longer. It is currently the period from April to August, but in a few years it may be longer still" - the scientist said.

"Although the storm that passed through our country was strong, the wind speed only reached 2 on the seven-degree (0-6) Fujita scale" - said Prof. Malinowski.

According to Prof. Malinowski, in Poland there has been no meteorology and climatology education for many years, therefore, in the field of weather forecasting and extreme phenomena, "Poland does not reach and in the coming years has no chance to reach good world standards".

"The hardware matters, but the most important things are people, experience, organization. In many countries, including Western Europe and the US, weather forecasts are more precise" - he added.

On 11 and 12 August, intense storms, hail and torrential rains rolled through Poland. The four most affected provinces were: Dolnośląskie, Wielkopolskie, Kujawsko-Pomorskie and Pomorskie. The wind damaged 45 thousand hectares of forest. Clearance of areas affected by storms will continua until 2019 - said Anna Malinowska, spokeswoman for the State Forests. She added that it will take 80-100 years for the adult forest to be restored in these areas.