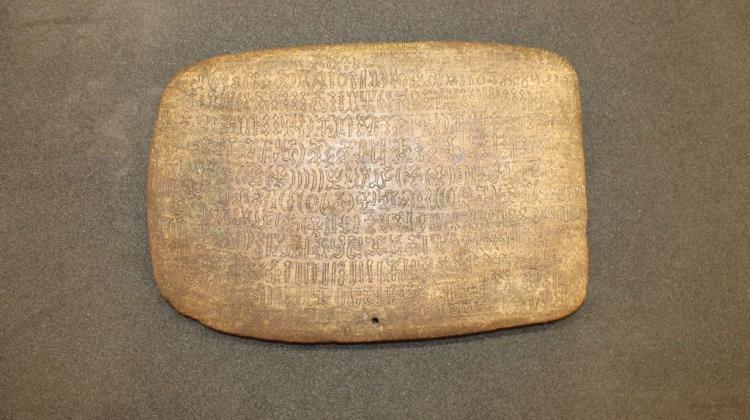 In one of the most secluded places in the world - Easter Island - the rongorongo writing was invented a few hundred years ago. Attempts to read it are currently being made. Among the few people who have taken up this challenge is a Polish researcher, Dr. Rafał Wieczorek.

25 artefacts with rongorongo inscriptions have been preserved to our time. Rongorongo is a system of glyphs known only from Easter Island - none of the other Polynesian peoples have invented writing.

"There is a lot of evidence that Easter Island is one of the few places in the world where writing was invented independently of other recording systems. Why it was created in such an isolated location, remains a mystery" - told PAP Dr. Rafał Wieczorek from the Faculty of Chemistry, University of Warsaw.

Deciphering the glyphs is the more difficult that only a few people in the world are working on it, non of them "full time". For all involved it is a side project. "In order to move things forward, it is necessary to set up a research team that would focus on just that" - believes the researcher.

Dr. Wieczorek specialises in astrobiology, but many years ago he joined the international group, whose goal is to attempt to decipher rongorongo. The researcher admits that he devotes more and more time to this passion - he is also the author of several articles on rongorongo published in scientific journals.

Despite many question marks, investigators of the mysterious writing established several facts. First and foremost, it is known that rongorongo was used by the aristocracy living on the island - it was not a commonly used writing. Sentences were read in the reverse bustrofedon system - the medium had to be rotated while reading. How could this be determined even though the writing still has not been deciphered? "Sequences of characters are repeating on a few tablets. In some cases they go to the next line of text, and in others, they continue in one line" - said Wieczorek.

There are many indications that rongorongo should be read similarly to the Egyptian hieroglyphs. In that system, the writing is based on logograms (signs representing what they depict or metaphorically related words) phonograms (signs indicating consonants) and determinates (symbols that clarify the meaning of the preceding word written phonetically). Unlike the Egyptian hieroglyphs, of which there are about 1,000, there are significantly fewer glyphs in rongorongo size, researchers estimated their number to be just over 600. Among them are glyphs depicting human figures with supernaturally long arms in various poses, but also animals - birds, fish, sharks, mice and rats. There is also a large group - about 200 simple characters - which are difficult to identify. They resemble tools or weapons.

However, there are still many question marks. Scientists have failed to determine when rongorongo was invented. "Some have suggested that this happened only as a result of contact with European invaders, but that is unlikely" - said Dr. Wieczorek. Physicochemical analyses of artefacts are not helpful in this matter - only one has been carbon dated. A date close to the 18th century was obtained, but this kind of analysis does not work well in the case of recent past.

Other Polynesian peoples did not have their own writing systems. Why then did one appeared on one of the world\'s most secluded islands? Science has not yet found an answer to this question.

Researchers have divided the tablets based on their supposed content. Only in one case is there full agreement that it concerns astronomical phenomena - there are 28 signs representing the crescent. The analysis of the Polish researcher shows that perhaps another tablet has similar content - Wieczorek came to this conclusion after performing a statistical analysis of glyphs on all the preserved tablets covered with rongorongo. The second "astronomical" tablet was in Belgium, but it burned down during the First World War. However, the researcher found a photograph of that tablet. He was able to determine that the sequences of glyphs, including the crescents, in some places were the same on both tablets.

In the latest publication, the Polish researcher pointed to one of the glyphs used on the tablets - in his opinion the symbol representing three beads was a duplicator. Polynesian languages, to which to the language spoken by the people of Easter Island belongs, are known for the use of duplications: word +tea+ means +bright+ and +teatea+ means +white+" - the researcher explained. The modern name of this writing system - rongorongo - consists of a duplicator. The word means "to recite, to declaim, to chant out". The researchers do not know, however, what its original name was.

The writing of the inhabitants of the secluded island on the Pacific almost remained unnoticed. A puzzling issue is that none of the first European explorers of the island (in 1722) noticed the literacy of the local population. Hundreds of wooden tablets covered with enigmatic inscriptions hidden in huts began to be reported more than 100 years later by the Christian clergy.

"At that time, no one was able to read them anymore" - added Dr. Wieczorek. And the pragmatic inhabitants of the island - decimated by European invaders - used the tablets as a kind of lighters, because the island always had a problem with wood shortages.

Interestingly, the tablets did not impress clerics - one of the tablets was used as a reel for the decorative rope that the brothers presented as a gift to their superior, the Bishop of Tahiti in 1869.

"Meanwhile, it was not the gift itself, but the reel that caught the bishop\'s attention. Thanks to his intervention most of the known tablets are preserved to this day" - said the scientist. In subsequent years, several expeditions, including expeditions from Russia and England, managed to acquire individual artefacts. The last tablet considered original appeared at an auction in London at the end of the 19th century.

"Attempting to decipher rongorongo is a very intellectually stimulating activity. I hope that it will be successful - by studying further the internal structure of the writing and its layout, we will certainly make further progress in this area" - concluded Wieczorek.