DNA nanostars will help in the study of Alzheimer's disease 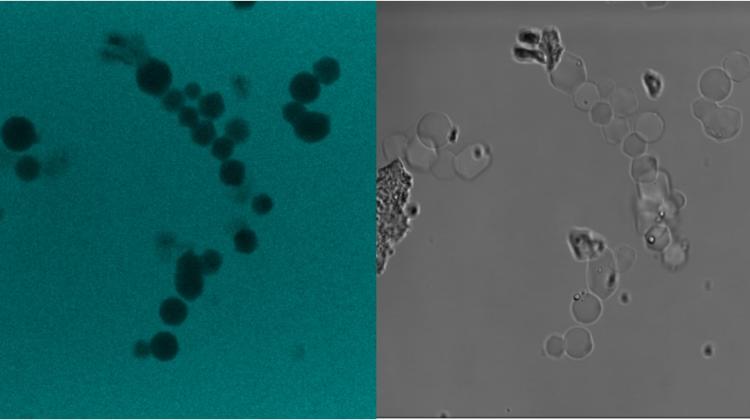 Photographs of microcrystalline DNA made with a confocal microscope; Photo by Aleksandra Bartosik, BSS, University of Cambridge

Creating nanostars from DNA strands ... This is the task of one of Cambridge University\'s scientific teams. It is not just an extravagant hobby, but an opportunity to investigate the causes of Alzheimer\'s disease and search for new drugs.

The purpose of the project is to break down proteins by means of nanostar structures and study them. Aggregation of proteins is a problem in many diseases, such as Alzheimer\'s disease. "To investigate how the process of protein aggregation can be reversed, we need a method that will allow us to analyse individual parts of a given protein and study them separately" - told PAP Aleksandra Bartosik, Polish researcher from the University of Cambridge.

"We use modified DNA strands to build our nanostars. Their crystals range from 5 to 40 micrometers" - she explained.

Researchers start the preparation of nanostructures from designing them in a computer program. Then they send the resulting design to a company that synthesises short DNA elements. "In tiny vials we get dried DNA, which we have to suspend in an appropriate buffer. Thanks to the proper design of the structure, after inserting the dried DNA into the solution, it begins to create the structure we have designed" - explained Bartosik.

The shape that scientists want to obtain is a star, but it can have arms of varying lengths - depending on the length of the DNA strand. It can also have varying number of arms. Obtaining this shape is possible, among other thhings, by attaching cholesterol to the hydrophobic (water repelling) DNA strands.

Aleksandra Bartosik explained that the mixture of specially designed synthetic strands with attached cholesterol is first heated and then slowly cooled. The processes that occur cause the formation of regular microcrystals of up to forty micrometers.

"When we get our crystals, we will place them inside very fine tubs in special lab-on-a-chip devices" - explained the researcher. Lab-on-a-chip is a small flat analytical instrument a few centimetres in length. It contains microfluidic tubes, in which scientists precisely place micro-crystals of DNA acting as sieves. A protein solution containing various oligomers flows through. "In a nutshell, it can be said that it is a container that filters the proteins we study" - explained Bartosik.

Although, according to Bartosik, there are currently methods for breaking down proteins, the method developed in Cambridge will allow to further modify proteins and consequently better understand the mechanism of protein aggregation. "As a result, researchers more specialising, for example, in Alzheimer\'s research, will receive a tool that will be useful in their work" - Bartosik told PAP.

The work of Bartosik\'s team is basic research, but it can gain a practical dimension. "For now, we are making our nanostars and preparing the tool. We hope that other scientists, labs and companies will start using it next to typical Petri dishes and large amounts of laboratory glassware" - said Bartosik.

Lab-on-a-chip contains a system that would normally occupy much more room in the lab, require large amounts of reagents and test protein. "Our solution also saves time and consumed substances because it allows to simultaneously perform multiple measurements at different concentrations and ratios" - she concluded.