Archeologist: Amber was popular in Europe already 3.5 thousand years ago 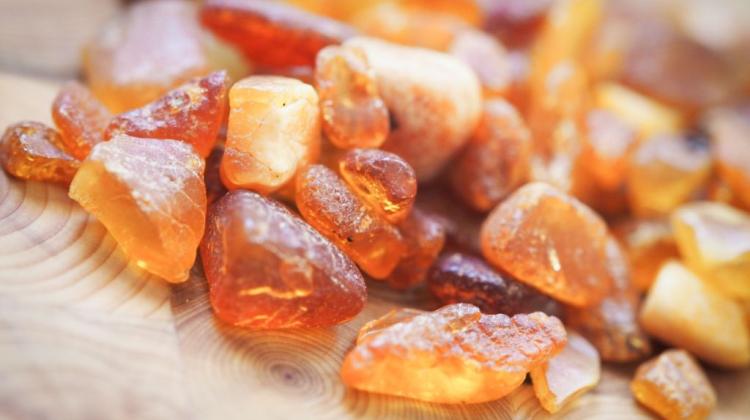 In different places in Europe archaeologists find very similar amber beads from about 3,500 years ago. For a long time they believed that the finds should be linked to a trade route to Greece. Poznań archaeologist Mateusz Cwaliński believes that things may have been a bit different.

"Archaeologists have found enormous amount of amber products from the Mycenaean period in Greece - which means that they are about 3,500 years old. Of course, these products had to be imported, most of the studies indicate that amber was imported from the Baltic" - Mateusz Cwaliński, PhD student at the Institute of Archaeology, Adam Mickiewicz University in Poznań said in an interview with PAP. The researcher adds that on a limited scale amber was also obtained from Sicily and Romania, but in prehistory those products constituted only a small percentage of the total amount.

What were people from the Baltic getting in exchange for amber? Probably bronze products, which are often found at the archaeological sites from that period. It could also be goods that have not survived to this day - salt or exotic dyes (e.g. purple dye).

According to the archaeologist Mateusz Cwaliński, important buyers of amber were not only the Greeks, but also the communities living on the Adriatic Sea. This area is the focus of the Poznań researcher, who has received the Start stipend from the Foundation for Polish Science for his research.

In the countries of the former Yugoslavia and in Albania alone, he has already counted around 700 beads and other amber objects, which are between 4000 and 2800 years old. Although the researcher is just beginning to analyse the occurrence of amber in the Italian Peninsula - he has already stated that this area may have many more amber objects than the eastern side of the Adriatic.

So far, scientists have seen the role of this part of Europe in the amber exchange process differently. They believed that the communities living in the Transadriatic area only mediated in the exchange, and the main destination for this raw material was the Mycenaean Greece. Now it turns out that the Central Mediterranean zone could be an equally important destination in the amber import routes already in the Bronze Age, suggests the Poznań archaeologist.

Interestingly, the form of the beads found throughout Europe is very similar. The objects are rarely identical, but their form is very similar. They include double-stranded beads, with a wider central part, narrowing towards both edges. On the other hand, there are amber objects from the Adriatic that resemble astragalus, that is, ankle bone, which in ancient times were often used as dice.

The Bronze Age was the period when the social elites developed. At that time, neither bronze nor amber products were necessary for life (bronze was a fairly soft metal, and amber - only decoration). However, their possession indicated a high social status - the scientist noted.

The archaeologist noted that tin and copper mining sites are sometimes far away from each other, while the largest amber resources are located on the Baltic. This means that the dynamically developing Mediterranean Mycenaean civilization did not have easy access to it. This forced the various communities to intensify contacts and led to the creation of a product exchange network.

"It is a common view that rare goods are considered as valuable and prestigious, and this was probably the case with amber" - Cwaliński added.

Amber had fascinated people for millennia. Its specific colour and texture were interesting, as was its smell while burning. Perhaps people even attributed magical properties to it.

Cwaliński found that most of the amber items found in the countries of former Yugoslavia came from graves; the situation is similar in Mycenaean Greece.

"How delicate the system of long-distance exchange of goods was a few thousand years ago is indicated by the fact that among the finds from around 800 to 700 BC there are no object made of amber on the eastern Adriatic. This could be due to migration and social unrest the disrupted the existing routes not only of amber, but also of tin" - said the archaeologist.

But later everything went back to normal. Starting from the 7th century BC, amber was again imported to these areas - in unprecedented amounts and more sophisticated forms. Accodring to Cwaliński, from that moment, the import of amber has taken on a more organized form, which can be described as the amber road, which connected the coast of the Baltic and Rome.

"Amber enjoys unfading interest to this day. For foreign visitors in Gdańsk, amber shopping on Mariacka Street is a mandatory item on the schedule. The city annually hosts the largest amber trade fair in Europe" - the scientist said.