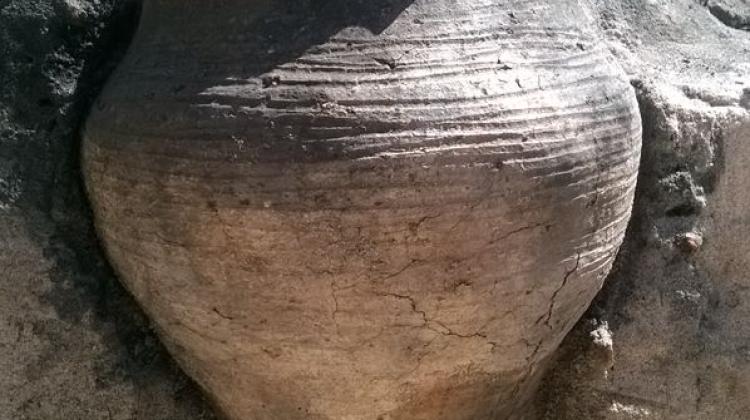 More than a thousand years ago, superstitious builders of a hut placed a clay vessel under its floor, containing a sacrificial offering of... sour soup. Head archaeologist Paweł Lis informed PAP about the discovery in Żmijowiska (Lublin province).

The 10th century hut discovered by archaeologists is located near the fortified settlement Żmijowiska - a place where scientists have been popularising archaeology for several years within the framework of a thematic museum.

"It was big - measured 5 by 4 meters and was dug quite deep into the ground" - told PAP Paweł Lis from the Nadwiślańskie Museum in Kazimierz Dolny, to which the fort Żmijowiska also belongs.

Interestingly, the discovery was made unexpectedly. Archaeologists wanted to move the medieval hut reconstruction to a place where it would not be regularly flooded with groundwater.

"As the place abounds with medieval relics - in consultation with the conservator of monuments - we started excavations. To our surprise, exactly where we wanted to place the reconstruction, we came across a more than a thousand years old original structure!" - added Lis. The planned reconstruction was almost identical in size and was erected in a similar way to that over 1,000 years old.

Next to the entrance to the hut (located in the eastern wall) was a kitchen stove made of clay and granite stones. For the construction of its walls, advanced construction techniques were used: log and chip-and-lathe.

"Its owners cared about the favour of house deities: under the floor, they buried a sacrificial offering - a clay pot that was discovered in its entirety" - said the archaeologist.

Archaeologists often discover single pieces of ancient vessels. Meanwhile, the pot under the floor was not only preserved in its entirety, but also contained the remains of plants. Archaeobotanical analyses made by Grzegorz Skrzyński from the Museum of the Earth of the Polish Academy of Sciences in Warsaw, these were fragments of cultivated crops: cereals (barley, millet, wheat), lentils and wild plants: saltbush, knotweed, sorrels, field mint. There were large amounts of white goosefoot (pigweed).

"The dish offered to house deities could be a sour soup based on white goosefoot with added saltbush, knotweed and sorrels, thickened with lentils, barley, and millet and wheat groats and seasoned with mint. The latter goes well with lentils" - said Lis.

The archaeologist believes that the dish could have been cooked in late spring or summer - taking into account the seasonality of the ingredients.

"It was not a very sophisticated dish, but rather a typical, rich in proteins Slavic food" - noted the archaeologist.

Inside the hut, researchers discovered the remains of more than ten types of ceramic pots - at least five of which will be fully reconstructed. In addition, there were many weaving looms, glass beads and items made of animal horns and antlers.

The fortress in Żmijowiska was built at the end of the 9th century. The Slavs built it in the place of an ordinary settlement. The fortress functioned until the mid-10th century, when it was burned down, possibly by Ruthenians.