Archaeologists have discovered a lost castle in the Lower Silesian Wilderness 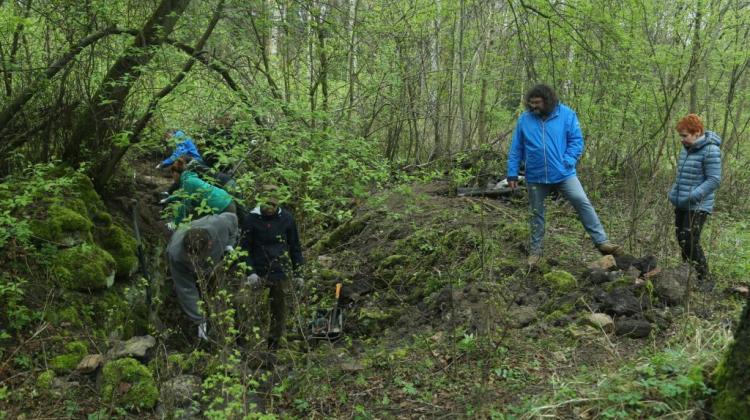 In the Lower Silesian Wilderness , archaeologists have found remnants of the castle belonging to the Piast dynasty prince Bolek II the Small (died in 1368) - the last independent Piast prince in Silesia.

The ruins are located in the village of Nowoszów (Neuhuas), abandoned after 1945, on the border of the provinces Lubuskie and Dolnośląskie.

"The castle we have discovered has been known only from medieval documents, because the area where the ruins are located is on the military training ground used until the 1990s" - told PAP Dr. Paweł Konczewski from the Department of Anthropology of Wrocław University of Environmental and Life Sciences. His research is the first comprehensive science project on the history of this place.

The castle was not a very impressive structure. On the basis of the discovered fragments, Konczewski assumes that it was a single tower erected on a rectangular plan. Its foundation was made of bog iron. The structure was partly made up of characteristic finger-marked bricks - their name comes from traces of craftsmen\'s fingers who had removed excess clay while making bricks.

Until now, no one made the connection between the remains of walls visible in the area and the medieval castle, because over time another structure had been built on the ruins. Identification was made possible be the recent architectural analysis.

According to Konczewski, the owner of the castle - Bolko II the Small - was one of the more talented princes of the Silesian Piasts. He succeeded in uniting the Duchy of Swidnica and Jawor. He was also a Margrave of Lower Lusatia. During his reign, in the middle of the 14th century, Silesia was very fragmented and consisted of many small duchies. Bolko II was the last independent Piast prince in Silesia.

"Due to territorial expansion, the ruler decided to build new castles or re-build older fortresses" - said the archaeologist.

The castle, discovered by archaeologists in the area of Nowoszów, the village abandoned in 1945, was built as part of a route connecting the prince\'s huge territory. It is located on an island on the river Czerna Wielka.

"Bolko II set a new route - to save time and take the lead in trade. On his route was a castle around which a settlement was built. Its inhabitants\' trade was the ironworks, due to rich deposits of iron in the area" - added the scientist.

"Aerial laser scan was helpful in locating the castle" - said the researcher. The technology allows you to look under the plant cover and identify terraforms or architecture.

Currently archaeologists are investigating the medieval village of ironworkers. So far, they have found a few places from which ore was obtained - it was shallow beneath the surface of the earth, so it was extracted in an opencast way. They have also discovered extensive slag heaps. "So far we have not been able to locate furnaces" - addes Konczewski.

The castle - in contrast to the settlement - existed only for a few years. After Bolko\'s death, the burghers from nearby Zgorzelec started the rumor that the castle of Neuhaus had been taken over by robbers. They were believed to attack the merchants following the rout set by the prince.

According to the archaeologist, the reason for that rumour was that merchants using the new trade route avoided Zgorzelec. As a result, burghers lost revenue on freight. The pacification of the castle was carried out by virtue of the privilege given to them by Emperor Charles IV to destroy the robbers\' nests and punish the robbers.

Archaeologists are still working in the field. They are waiting for geophysical research results to help gather more information on the castle and its infrastructure, and the shape of the medieval settlement.

"All the current conclusions have been drawn without excavations. The area we are investigating is especially protected for nature reasons. A shovel is not always necessary to make discoveries" - the scientist pointed out.

The research is being carried out by the foundation "Łużyce Yesterday and Today" in cooperation with the Department of Anthropology of Wrocław University of Environmental and Life Sciences and the University of Western Bohemia in Pilsen and the State Forests.