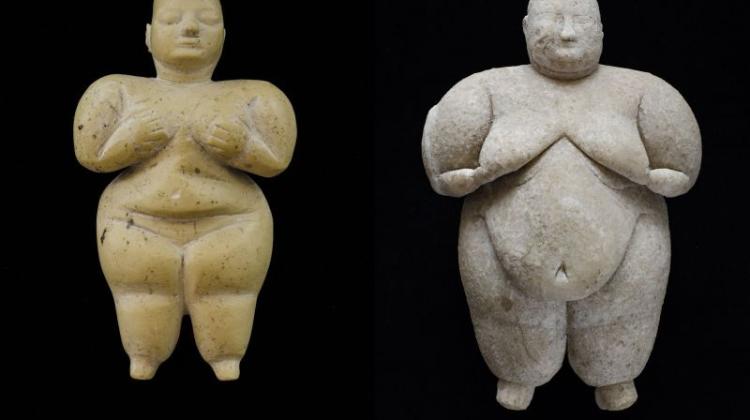 Two very well preserved, 8 thousand years old stone figurines depicting naked women were discovered by Polish archaeologists during this year\'s excavations in one of the oldest cities in the world - Çatalhöyük in Turkey.

The discovery was made in one of the largest urban centres of the first farmers and one of the most famous archaeological sites in the world - Çatalhöyük, located in the southern part of the Anatolian Plateau in central Turkey. The project leader is Prof. Ian Hodder of Stanford University in the US, but a team of Polish scientists has been involved in the project for several years.

Çatalhöyük was inhabited continuously for over one thousand years between the years 7100 and 6000 BC. According to the researchers during its heyday the densely built-up settlement had by approx. 5000 residents. The site became famous thanks to the murals, which decorated the walls of houses. They depicted as human and animal figures and geometric motifs. In 2012 Çatalhöyük was added to the list of UNESCO World Heritage Sites.

"Both figurines were discovered next to each other inside a house built at the end of the settlement activity, between 63 and 61 hundred years BC. Initially, we thought that we found another piece of ceramic vessel - then it turned out to be a belly of a figure" - explained head of the Polish expedition Prof. Arkadiusz Marciniak from the Institute of Archaeology of the Adam Mickiewicz University in Poznań.

The discovery was made in the part of the tell (artificial mound formed as a result of settlement from the accumulated remains of, for example, crumbling walls of mud brick houses) that the Polish archaeologists had been studying since 2012.

The figurines were lying on a platform, bench adjacent to one of the inner walls of the house, made of mud bricks covered with white plaster.

The smaller figurine, with the height of approx. 7 cm and weighing only 55 grams, is made in a more precise manner. The larger one measures approx. 17 cm in height and weighs 1 kg. The latter is made of marble; the smaller of limestone. They depict naked, full-figured female figures.

"In the case of the smaller figurine are even the physiognomic characteristics of the face are visible, as if it were a portrait!" - Prof. Marciniak said with enthusiasm.

Hundreds of anthropomorphic figurines have been discovered in Çatalhöyük. "However, those found by our team are unique. Firstly, they are perfectly preserved. They were made of stone. Their significant sizes are also new" - said Prof. Marciniak. According to the scientist, the discoveries in the form of small size clay figurines dominated so far. Most of them had their heads broken off. This was the case with the most famous artefact discovered in this part of the settlement - a clay figurine of mother goddess. The tradition making figurines of this shape probably dates back to the beginnings of the settlement, approx. 7.1 thousand years BC.

"It is also rare that we discovered these monuments in situ, which means they were located exactly where the ancient residents left them. Until now, similar figurines were discovered in the garbage layers, not within a particular house. This allows to better understand the intentions of their creators" - added the archaeologist.

According to Prof. Marciniak, both figures were closely linked to the two graves that were right by the platform - the then residents of Çatalhöyük buried their dead under the floor of their homes and continue to live in them.

"In this case, the situation was somewhat different. It appears that after the funeral the graves were filled and covered with an additional layer of plaster that also covered the discovered figurines. Rebuilt house remained occupied" - said the researcher.

The room, in which the discovery was made, is located in the eastern part of a large house with the area of approx. 40 sq. m. It was significantly larger than any other house known from this period.

"It was the part of the house that we call clean or ceremonial. Western and southern parts of the house were used for utilitarian purposes" - he added.

The house studied by Polish archaeologists, comes from the time in which the settlement was slowly declining after more than a thousand-year period of prosperity. This happened at the end of the seventh millennium BC. It was inhabited by fewer and fewer people. The dwellings inside were not so carefully decorated with paintings.

"The goal of our research is to understand, among other things, what led to the end of the huge settlement and how its last inhabitants lived" - concluded Prof. Marciniak.

Both figurines went to the museum storage in Konya. Scientists are hoping that next year they will manage to examine the two graves, which the figurines accompanied. For now, their contents remain a mystery for archaeologists.