15 percent higher yields through improved photosynthesis in the shade 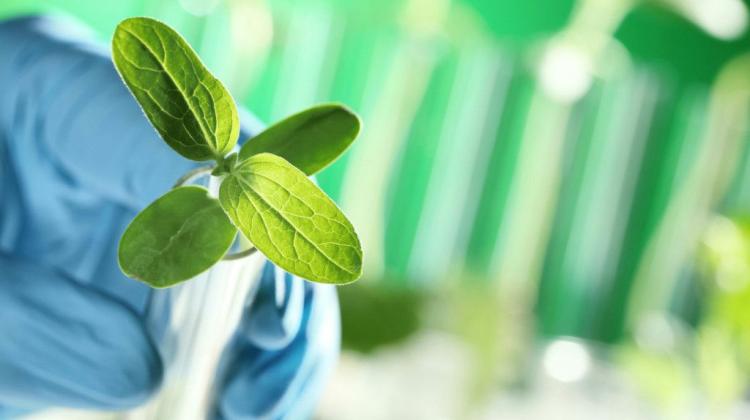 Researchers - including a Polish scholar - shed light on how to improve the process of photosynthesis, when the plant is in the shade. Genetically modified plants are up to 15 percent bigger. The results of research may help in the fight against world hunger.

In 2050 the Earth\'s population will be 9 billion. According to the Food and Agriculture Organization of the United Nations (FAO) estimates from several years ago, in order to feed everyone, food production has to be increased by 60 percent (compared to harvests in the years 2005-2007). This would be very hard to achieve by simply increasing farmland area. Scientists are looking for ways to obtain higher yields from the same area.

Glimmer of hope is research that ended up on the cover of the weekly "Science". The first author of the study - together with Johannes Kromdijk - is Dr. Katarzyna Głowacka, associated with the Institute of Plant Genetics PAS in Poznań. The scientists conducted their research at the University of Illinois (USA).

Biologists have discovered how to improve the process of photosynthesis by means of genetic modification. This allows the plants to more quickly "react" to favourable light conditions and use more solar energy. This in turn makes them grow faster and get as much as 15 percent larger compared to control plants.

For now, research was conducted on a model plant - tobacco, but researchers have no doubt that a similar effect can be observed in other plants. For these tests, however, they need time.

People protect themselves from excessive sunlight, for example, by wearing sunglasses. Plants also do not like it when the light is too intense - it can destroy the tissue. Therefore, the leaves contain chemical compounds that allow to convert excess energy into heat. The so-called. NPQ mechanism (non-photochemical quenching) is - in very simple terms - their equivalent of our sunglasses.

But to wear their "sunglasses" - start all the chemical machinery that defends against excessive light - plants need at least a few minutes. Halting the process is not fast either - it can take an hour. A lot can happen during that time.

"Light is not constant during the day - said Dr. Głowacka in an interview with PAP. - Sometimes there are clouds, sometimes blowing wind can change the position of the leaf, and this will change the angle of the sun and the leaf will hide in the shade" - she explained.

We know that in the shade or in the dark sunglasses are an obstacle. It is the same with plants - when a plant is in the shade, it unnecessarily converts solar energy into heat. It is pure waste! It could use this light for photosynthesis and grow faster.

"It turns out that due this sluggish NPQ mechanism plants lose in total a few hours of sunlight a day" - said Dr. Głowacka.

Together with her team, the researcher showed that by increasing the expression of genes responsible for the NPQ process they can make the plant have "better reflexes" and react more quickly to changes in lighting.

"We checked in separate experiments: in the field - in uncontrolled conditions, and in a greenhouse - in partly controlled conditions. In both types of experiments we obtained similar results: modified plants were about 15 percent larger. And that includes roots, stems and leaves" - described the researcher.

She added that it had not yet been checked whether seeds and fruits would be noticeably larger. Scientists want to test it in the next experiments, including experiments on rice. Then will be time for soybeans, cassava and sorghum - plants that can form the basis of a diet in developing countries, where food is scarce.

Dr. Głowacka points out that photosynthesis mechanisms in different plants are very similar. Therefore - according to her - obtaining similar results in other crops by means of the same modification is only a matter of time.

"In this study we were the first in the world to show - with the right amount of convincing experimental data - that higher yields can be obtained by modifying the process of photosynthesis" - concluded the researcher.

In a controlled experiment, researchers introduced to tobacco genes from other plants - Arabidopsis. The new plant is, formally speaking, a genetically modified organism. GMOs are subject to numerous restrictions. But since it is already known which genetic mechanisms are responsible for efficient photosynthesis, it will be easier to identify other paths to obtain plants with the desired properties. For example, it could turn out that it will be sufficient to strengthen the expression of the genes already present in the species. Plants obtained this way are no longer treated as GMOs and much easier to introduce to the market.

The study is part of the project RIPE (Realizing Increased Photosynthetic Efficiency) funded by the Bill and Melinda Gates Foundation. The aim of the research is to increase the productivity of agricultural crops and, as a result, reduce hunger and poverty of farmer families in sub-Saharan Africa and south-east Asia.