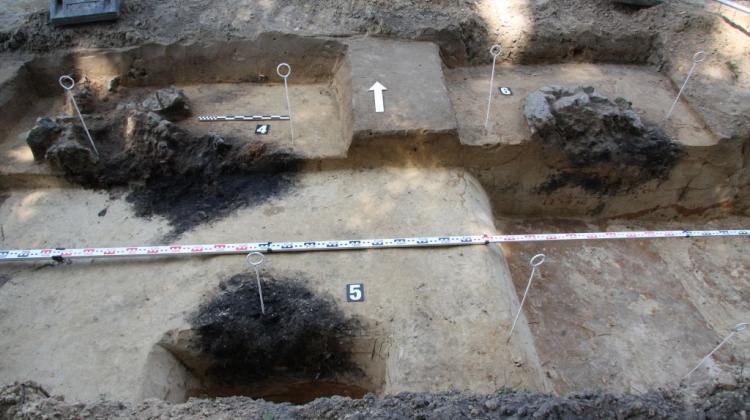 More than 70 bloomeries - ancient furnaces for iron smelting - were discovered by archaeologists during excavations in Kanie (Mazowieckie). The discovery was made during research preceding the construction of a housing estate.

The settlement discovered by archaeologists to be the Mazovia Metallurgical Centre active approx. 2 thousand years ago, located in the western part of this region. It was one of the largest metallurgical centres in the then "barbarian" Europe - as the Romans called the inhabitants of this part of the continent, living outside the Empire. Archaeologists estimate that over the period of activity of the Mazovia Metallurgical Centre (II BC - IV AD), as many as 150 thousand furnaces could be operated.

"Bloomeries were single-use furnaces. Today we discover only the recessed parts of the furnaces, pits filled with waste material, slag. The top part of the bloomery, clay shaft - was broken after completion of the smelting process to get to the iron obtained from bog iron " - explained in an interview with PAP excavations leader, Dr. Tomasz Kołomański.

Clay furnaces were partially dug into the ground. However, chimneys protruding above ground level reached two meters in height. Smelting iron took about a day. The temperature inside the furnace oscillated around 1200-1300 degrees Celsius - according to information provided by the archaeologist.

According to the researcher, iron production technology from two thousand years ago has not been effectively recreated yet.

"Today during the experimental attempts to smelt iron from bog iron, we are able to produce a lump of iron that fits in one hand, while the ancient metal workers obtained 20-30 kg of iron from 200 kg load" - explained Dr. Kołomański.

In addition to bloomeries, within the studied part of the smelting settlement the researchers found the remains of large utility rooms. In their interiors they found loom weights and clay spindle whorls, evidence of occupations related to handicraft, weaving and spinning. Numerous animal bones also caught the attention of researchers. With them, scientists are able to reconstruct the diet of the then population.

"The basis was the meat of farm animals - cattle, pigs, sheep and goats. A small percentage were the remains of game, deer and roe deer" - added the archaeologist.

The settlement was inhabited by people identified with the famous Vandals, whose representatives later, in the half of the 5th century, sacked and looted Rome.