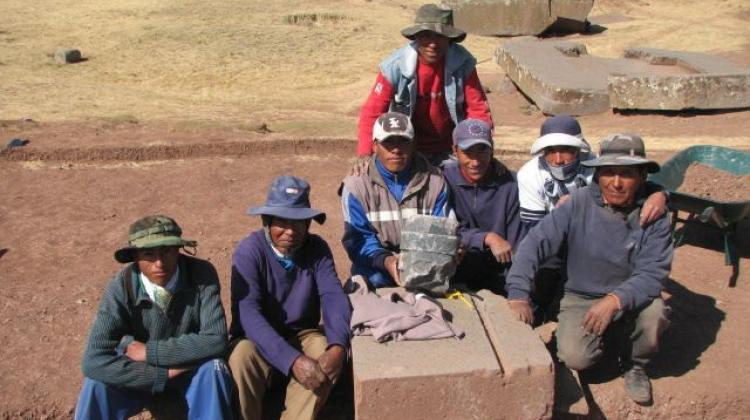 Scientists from Poland and Italy are working together on the South American sites inscribed on the World Heritage List of UNESCO: the Nazca geoglyphs, Inca centres in the National Park of Machu Picchu (Peru), Tiwanaku and Samaipata (Bolivia).

Scientists from Poland and Italy have cooperated in the field of archaeological research already for three decades. The prospects of cooperation were discussed in October at the University of Warsaw.

"Traditions of Italian-Polish research cooperation in South America go back to the nineteenth century. The new phase was the participation of Polish archaeologists in the Italian project in the desert of Nazca in Peru, launched in 1986" - Reminded the PAP director of the Centre for Precolumbian Studies, Prof. Mariusz Ziółkowski. Many of these people are now involved in various research projects in South America.

Already in the 1980s Jerzy Grodzicki and Stanisław Ostaficzuk determined that part of the Nazca geoglyphs had been created on the ground resulting from gigantic catastrophes - debris and slides - said Prof. Ziółkowski. Nazca is a very dry desert, but due to the El Niño phenomenon very heavy rains occur there from time to time.

"The analysis of these sediments allowed to demonstrate that some of the geoglyphs were made much later than expected, just before the Inca period. Previously, it had been known that geoglyphs were not created in one moment, but in phases, starting ca. mid-1st millennium BC. Polish scientists contributed to the prolongation of knowledge about this period by several hundred years" - said Prof. Ziółkowski.

Geoglyphs in Nazca are believed to be ceremonial roads used in the deserts during the rituals related to agriculture, including the cult of water. In the 1940s there was also a theory that they also served to mark the rise and set places of celestial bodies - for the determination of time of important religious ceremonies. Later statistical and astronomical research did not confirm this - reminded Prof. Ziółkowski.

One of the basic problems in the study of geoglyphs - noted Prof. Ziółkowski - was the difficulty in separation of successive layers, which were created over approx. 2 thousand years. The newer partly blurred the older ones.

As part of the Italian-Polish collaboration, researchers will revisit this issue - as decided during the meeting in Warsaw. They will use the most recent remote sensing techniques.

The Italian team of Prof. Nicola Masini has already started to untangle the jumble of geoglyphs and draw their new, changing plans. Multispectral analysis of satellite and aerial images allowed to detect previously unknown shapes.

The next stage of research will involve Polish scientists, who have years of experience with the calendars and knowledge of astronomical phenomena in pre-Hispanic America. "We will try to see whether - and in which phases of the creation of geoglyphs - the authors drew them in accordance with the directions of rising and setting of certain celestial bodies, important in the beliefs of the pre-Columbian peoples" - announced Prof. Ziółkowski.

The research project in Nazca is not limited to the analysis of the mysterious signs. Poles (the late Dr. Sławomir Skibiński of Nicolaus Copernicus University in Toruń) developed a method for conservation of the ancient mud brick walls in the main centre in Cahuachi. "It is used to this day, with some modifications" - said Prof. Ziółkowski.

In turn, Prof. Anna Gruszczyńska-Ziółkowska of the Institute of Musicology made the reconstruction of the system of sounds of musical instruments known from Nazca.

Poles and Italians also work in other places in the UNESCO cultural heritage list. In the upcoming season, researchers from Italy will support the Polish team working in Machu Picchu as part of a project funded by the National Science Centre. "Italians will perform GPR survey, they are the undisputed experts in this field" - noted the archaeologist.

Poles conduct extensive work in the area of Machu Picchu since 2013- including excavations at two ceremonial and religious sites and underwater surveys of lakes.

Italian researchers are also involved in another Polish project that started in 2016 in Samaipata, Bolivia - another site in the UNESCO list. It is a huge rock (with dimensions approx. 250 by 60 m.), covered with hundreds of rock engravings from various periods.

Head of the project (also funded by the National Science Centre) is Prof. Jacek Kościuk from Wroclaw University of Technology. Scientists already have documented the engravings in 3D laser scanning technology, photogrammetry and multispectral photographs using a drone. Prof. Giuseppe Orefici, invited as a world-renowned expert on pre-Columbian rock art, participated in the project.

"New technologies used by the Poles allow to detect almost invisible engravings, and determine the phases of their creation. These results, although preliminary, are already widely commented in the scientific world" - emphasised Prof. Ziółkowski. The Centre for Precolumbian Studies headed by Prof. Ziółkowski is also involved in this project.

At the meeting in Warsaw scientists also discussed the research in Tiwanaku, near Lake Titicaca in Bolivia (another place in the UNESCO list). From VI to X century it was a great spiritual and political centre of the Tiwanaku culture that left intriguing stone architecture.

"We conducted joint Bolivian-Polish-Italian research, trying to find clues about the cause of the fall of the culture" - said Prof. Ziółkowski.

Before the publication of the results of these studies, scientists plan to dig in places where remote sensing allows to expect underground remains of walls and stone blocks, and even perhaps sculptures.