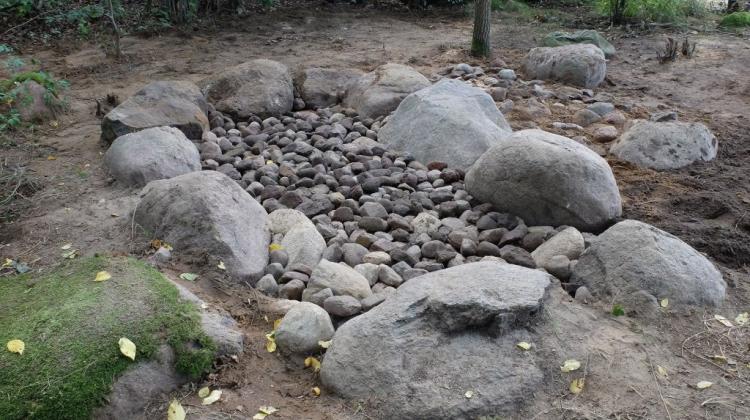 Ten monumental court tombs from before nearly a thousand years have been unearthed by archaeologists in Sasiny (Podlaskie). Although their form resembles Neolithic tombs - Christians are buried in them - told PAP archaeologist Dr. Michał Dzik.

The cemetery in Sasiny is located in the eastern Poland - Drohiczyn Upland. In the XI-XIII centuries, when the dead were buried there, the area passed from hand to hand - at times it was under the rule of the Piast princes, other times - Rus\' princes. It was a frontier area.

"All members of the local community were buried in the study graveyard - both poorer and richer, including the elite. Funeral rites were common to all. Each of the deceased was placed in a large burial structure, the edges of which was marked by big boulders" - explained in an interview with PAP leader of excavations in Sasiny, Dr. Michał Dzik from the Institute of Archaeology, University of Rzeszów (IA UR).

The graves examined by archaeologists have almost rectangular outlines. The space surrounded by boulders, some of which weigh over half a ton, was filled with several layers of pavement stone, which covered the deceased, placed in a wooden coffin, or covered with a shroud. Structures of this type have extensive size - on average 5 by 3.5 m.

According to Dr. Dzik, the cemetery served the local community and the unusual graves are the result of the evolution of the local burial customs. According to other hypotheses, the form of these graves could have been introduced to the area by settlers from Mazovia, or by warriors of Scandinavian origin who came through Rus\'.

"Most of the tombs we discovered were partially destroyed, but research results turned out to be very interesting. The burials in their graves have not been disturbed" - explained Dr. Dzik.

The cemetery is unique because very few similar sites survived to our times. This happened because the local population in Mazovia and Podlasie (where they occurred) acquired stones from them for building material.

"It is also surprising that the Christians were buried here, although the form of graves could suggest otherwise - flat cemeteries with the pit graves dominated in Wielkopolska or Malopolska at that time" - said Dr. Dzik.

According to the researcher, although in XI-XIII centuries Christianity has already been introduced in the Polish-Rus\' borderland, many old pagan customs had still been retained. One of them could be the form of graves.

"In the second half of the XI century cremation was quickly becoming less common. At the same time, barrows with stone structures underneath were no longer built. We believe that the reason was the prohibitions introduced with the spread of Christianity. In the same period tombs in stone enclosures became popular, but without burial mounds" - said the archaeologist.

During the examination of individual graves, archaeologists discovered traces of burial customs from pre-Christian times - such as bonfires made within the tomb before backfilling, or fragments of broken earlier vessels placed next to the deceased, possibly vessels used during the wakes.

Dr. Dzik doubts the presence of Christian priests during funeral ceremonies at similar necropolises, which could also contribute to the fact that the old customs were still practiced.

Numerous ornaments discovered next to the deceased caught the attention of archaeologists - including dozens of glass beads, silver and silver-plated temple rings, pendants in the form of a crescent moon with a cross (i.e. lunulae). Discovered items indicate that at least some of the dead were buried in a rich, probably festive attire.

"Some of the ornaments were made very precisely, using complex jewellery techniques. Some might find it surprising that the community considered to be living on the edge of the world had such a high material culture" - noted the researcher.

The cemetery in Sasiny was discovered twice - for the first time in the early 1960s. At that time it was studied by the lovers of antiquity. Then it was forgotten until 2009. The first regular excavations took place only last summer. Participants included IA UR students and volunteers. The research was funded by the Regional Office for the Protection of Monuments in Białystok, with the support of IA UR.