Thousands of artefacts discovered during excavations in the lost city 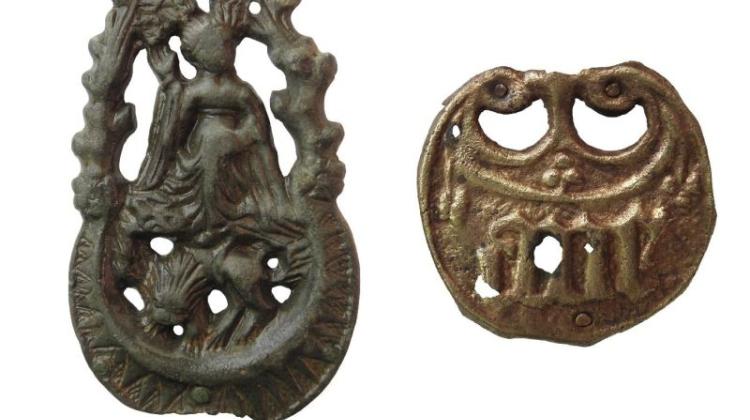 Bone combs, iron knives, ornate bourgeois and knight\'s belt fittings, coins - are some of the relics discovered during the first excavations at the medieval town Dzwonowo (Wielkopolska). Archaeologists discovered its location in 2014.

In the last decade in Poland aerial photography helped discover two more lost medieval towns - the first location of Szamotuły and Nieszawa. The newly found centre was called Dzwonowo, but in the literature it was more often referred to as Swanow or Zwanowo. The town is located in the area of the Forest Zielonka. The first mention of the town comes from the early fourteenth century.

In the summer, archaeologists focused on excavations in two places - a cemetery, where the residents of Dzwonowo were buried from the fourteenth to the eighteenth century and the market square.

"The results of the excavations exceeded our wildest expectations" - told PAP archaeologist who led the research on behalf of the Regional Museum in Wągrowiec and the discoverer of the lost city, Marcin Krzepkowski.

In the first week of excavations, archaeologists examined 21 graves. One of the deceased had a coin placed in the mouth. It was a Sigismund III Vasa penny, which allowed scientists to determine the time of burial was the first half of the seventeenth century. The Dzwonowo cemetery was associated with the St. Michael church demolished almost 250 years ago.

From the east the cemetery adjoined to the earth embankments of the town, whose existence archaeologists also managed to confirm during this year\'s work.

"Trenches at the old market square yielded very interesting results. We found the remains of medieval buildings, with preserved remains of buried basements with walls built of wood" - said the archaeologist.

During the excavations it turned out that the fourteenth-century building on one of the plots burned down with the underground part. The house was soon rebuilt with a slightly smaller cellar.

According to Krzepkowski it is possible that traces of a fire could be associated with the civil war in Wielkopolska in the 1380s.

Archaeologists excavated a huge number of artefacts from inside the cellars. One of the most valuable is a denarius of Władysław the Short from the years 1312-1333 - according to Krzepkowski, it is the fifth such known coin. Archaeologists also found combs, sharpening stones, iron knives and fire strikers, ornate bourgeois and knight\'s belt fittings.

"Discovered artefacts indicate the rich material culture of the townspeople" - said the researcher.

This year\'s study was funded by the Regional Conservator in Poznań. In November, archaeologists will return to the area. They will conduct non-invasive studies in a project financed by the Ministry of Culture and National Heritage. They will also search for relics of the village predating the foundation of the city.

The discovery site of the medieval town is situated in the area of poorly recognized by archaeologists - dense Zielonka Forest north of Poznań. Archaeologists usually discover settlements and cemeteries during surface surveys, which involve searching for fragments of pottery and other relics in crop fields after ploughing. Forests effectively impede such actions. Dzwonowo has been discovered only because its relics are in cultivated fields surrounded by forest. Marcin Krzepkowski noticed the outlines of the town during the analysis of the photos published in the Geoportal.