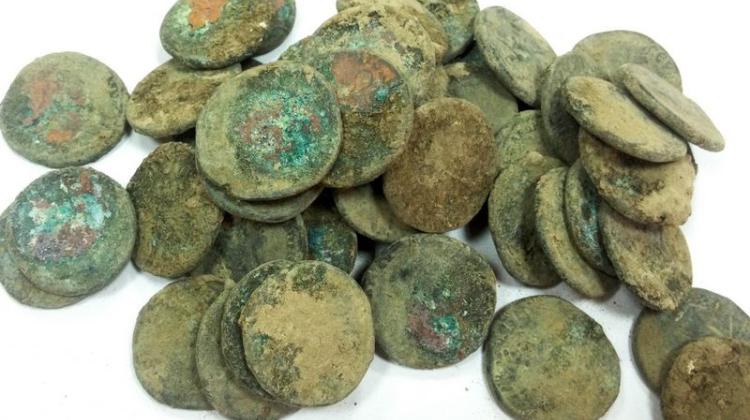 Traces of the presence of the Slavs, a treasure of silver coins and baths inside the barracks of legionnaires - which is the first such discovery in a Roman camp - have been discovered by Warsaw archaeologists during excavations in Novae near Svishtov, Bulgaria.

Warsaw archaeologists have conducted excavations at Novae for more than half a century. Every year, their work reveals new details about the realities of life of members of two historically important legions - the VIII Augusta and the I Italica - relics of the camps from two thousand years ago are preserved in Novae.

During the summer, researchers from the Centre for the Study of Antiquity of Southeastern Europe of the University of Warsaw continued to work in the wooden barracks of legionnaires of the I cohort of the Augustus\' Eighth Legion, discovered in previous seasons.

Archaeologists speculated that the barracks housed either four or two Roman centuriae. In the first case the structure would measure 80 m in length, in the second - half that. Therefore they expected to discover the remaining parts of the structure or its outer walls. Meanwhile, archaeologists were in for a surprise.

"The result of excavations proved quite amazing. We uncovered well-preserved floor made of hydraulic mortar - having the sealing properties. It originally covered the entire surface of one large room in the barracks. The use of such mortar suggests that we are dealing with a bath. Until now, throughout the empire only two baths in wooden buildings have been discovered, but never and nowhere in the barracks of legionnaires" - noted Prof. Dyczek.

In Novae, practically in every place where excavations were conducted, archaeologists discovered parts of technologically advanced water mains or sewers. In the camp running water flowed through terracotta and lead pipes (only this year, archaeologists discovered a six-foot piece of pipe made from this material) and channels built with stones and bricks. It was supplied to the interior of the camp with an aqueduct from the river Dermen. Such installations indicate that the Romans placed great emphasis on cleanliness, even away from home, on the borders of their world. New discovery of Polish researchers in the barracks of legionnaires is consistent with previous findings concerning their hygiene.

Archaeologists also obtained details of the construction of the barracks. The main load-bearing walls were made with a box-like structure - inner part of a wooden frame made of thick beams was filled with vertically arranged wooden posts with attached braid, coated with a thick layer of loess with chaff.

Prof. Dyczek pointed to another important discovery made during this season - it is a numismatic treasure, which consists of 48 coins.

"The uniqueness of this collection lies in the fact that it covers the period from the beginning of the second century AD to mid-third century AD and consists of so-called provincial coins, minted in mints outside Rome. It is the greatest treasure of such coins discovered so far in Bulgaria" - said the scientist. In his view, the coins were hidden approx. in the mid-third century AD, probably in connection with the invasion of the Goths.

The real surprise for the scientists was the discovery of a well-preserved, small furnace.

"It would not be a sensation in itself, if not the fact that this type of very rare discovery is associated with the first wave of Slavic settlement in the Bulgarian lands. This is the first tangible trace of their presence in this place" - said Prof. Dyczek.

The furnace comes from the fourth century, when the Roman Empire had been already fallen, in part due to the invasions of numerous tribes from Eastern Europe, including the Slavs.