Unusual burials at an ancient cemetery in Georgia 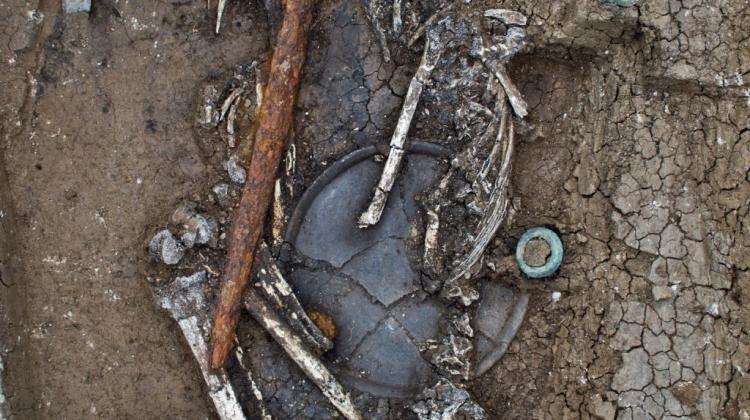 Two headless skeletons and a burial in the form of... a skull are among the discoveries of Georgian-Polish team of archaeologists during excavations in the ancient cemetery Beshtasheni in the region of Lower Kartli, south-eastern Georgia.

In total, during the excavations carried out in the summer, archaeologists discovered and studied sixteen graves of the Late Bronze Age and early Iron Age (XIII-VI century BC). Most of them were covered with stone or soil mounds, or large stone slabs.

"The number of discoveries and the richness of the tombs surprised even us - archaeologists. Previous seasons were full of interesting finds, but not in such quantities" - explained in an interview with PAP Jacek Hamburg from the Institute of Archaeology of the University of Warsaw, who led the work of the Polish team. Georgian person responsible for the excavations is Dr. Dimitri Narimanishvili of the Georgian National Museum.

Hamburg drew particular attention to the double grave of a man (19-25 years) and a women (23-25 years). Both skeletons were arranged on the right side in a foetal position, next to each other.

"Interestingly both deceased persons were buried without their heads. What\'s more, after analysing the woman\'s skeleton we found two bronze arrowheads in her body - one in the leg and the other under the ribs, near the heart. They could have been the direct cause of her death" - said the researcher.

In another tomb, archaeologists found only ... a woman\'s head. The age of the deceased was determined to be 17-25 years. Her skull rested on a flat plate, around which during the funeral the ancients placed several other ceramic vessels, carnelian beads and difficult to identify (due to the poor state of preservation) metal objects.

The largest tomb discovered this year belonged to a young man. Next to the skeleton arranged in the foetal position was over half a meter long dagger, belt made of bronze, with visible decoration schematically depicting animals in the deer or equine family. "Interestingly, traces of repairs are also visible on the belt" - added Hamburg.

The deceased was also equipped with a belt buckle. The belt itself has not been preserved, like most other objects made from organic materials.

"Most likely it was used with a chest belt for melee weapon or with a plain leather belt" - believes the archaeologist.

But that\'s not all. In the tomb archaeologists discovered a collection of arrowheads made of bronze, iron, animal bones and horn, used both for hunting and fighting. There was also a bronze pin decorated with geometric patterns. In the corner of the tomb there was a complete skeleton of a young pig; many other graves also contained the remains of pigs and other animals.

Researchers also drew the attention to a characteristic "pedestal vessel", characterized by a tall, slender form with opening significantly expanding upward. Vessels of this type are often partially decorated with red dye. Many units have holes in the central part of the bottom of the vessel, making it even harder for archaeologists to interpret them. "Pedestal vessels" are found only in this area of Georgia, but archaeologists rarely find them.

"We discovered similar vessels in other graves we studied. It is an unexpectedly large collection, which is unique in the region" - said Hamburg. He added that the purpose of the vessels is not clear and requires further analysis; archaeologists also plan to test the soil samples taken from inside the vessels.

It is interesting that the persons buried in the Beshtasheni cemetery included both warriors and farmers - noted Dr. Dimitri Narimanishvili of the Georgian National Museum. According to the researcher, large amount of discovered weapons means that the people buried there were no strangers to fighting - weapons have been found in most graves, which indicates a strong militarisation of the community.

"Military activity of the local community is not surprising. In those times the area of modern Georgia was invaded by both Urartians and Assyrians" - added Hamburg.

It was the records of the invaders that provided information about the existence of a coalition of proto-Kartvelian tribes, which researchers often refer to as proto-Georgian. In the ancient records they are referred to as Diauehi or Daiaeni. These tribes were probably illiterate at that time.

Archaeological work in Beshtasheni has been conducted intermittently since the mid-1930s. Their intensification occurred at the end of last century, with the involvement of Prof. Goderdzi Narimanishvili. In 2012-2015 the expedition led by Dr. Dimitri Narimanishvili was joined by a number of Polish students. Since 2016, following the signing of a memorandum between the Institute of Archaeology of the University of Warsaw and the Georgian National Museum, the expedition officially became the Georgian-Polish Archaeological Expedition in Beshtasheni.